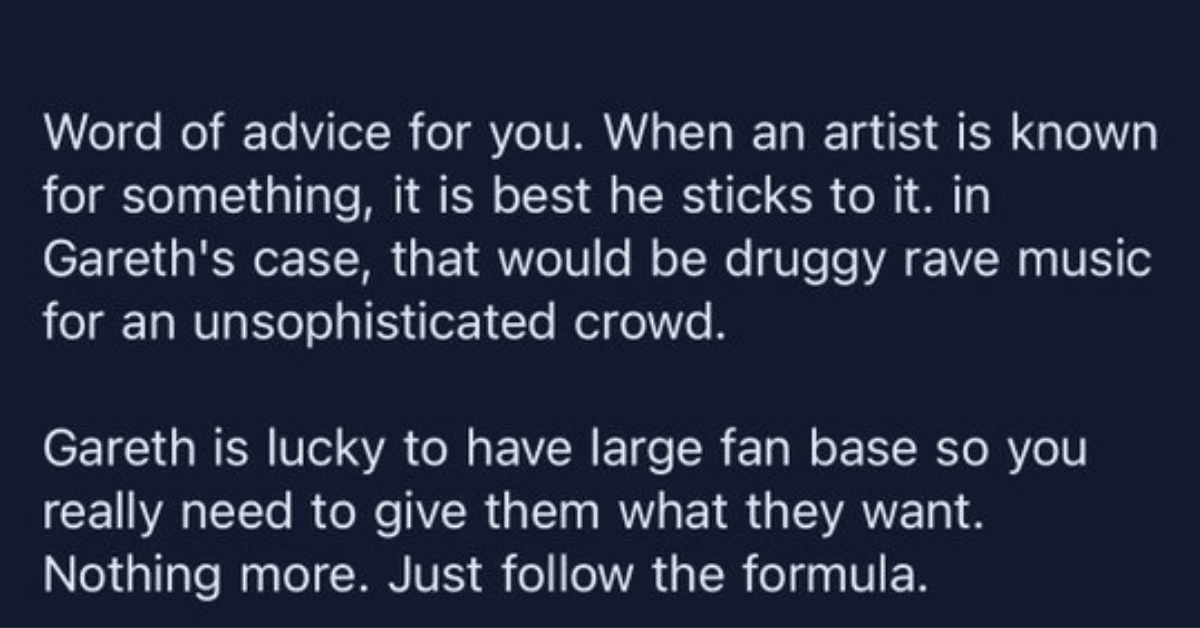 Trance artist Gareth Emery recently shared a screenshot of an e-mail from a “big radio promoter” that pigeonholes the artist and degrades his music and fans. The e-mail shows how the promoter labels Gareth Emery as an artist known for “druggy rave music” and that’s the formula he should stick with if he wants to have a successful career.

“Everything that is wrong with the legacy music industry in one email…,” wrote Emery via Twitter. “This email was from a big radio promoter declining to work on my new album ANALOG. Not gonna name names cos they actually were trying to help despite it being an insanely bad take. but if you’re ever wondering why so much bad music is out there, ppl like this is why.”

The e-mail goes on to highlight how artists should follow a formula giving fans no more, no less than what has proven to satisfy their wants:

“In Gareth’s case, that would be druggy rave music for an unsophisticated crowd.”

Apparently, Gareth Emery can only make “druggy rave” music in order to be succesful. 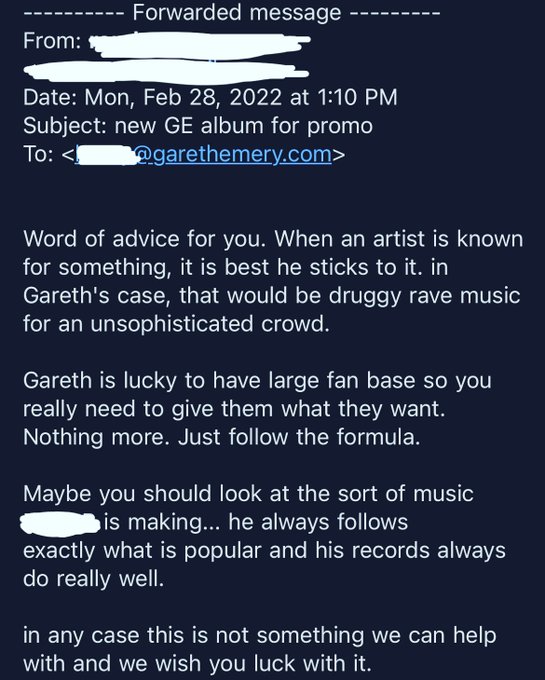 Is popularity more important than creativity?

How should artists approach their music?

Mainstream is defined by what’s popular, and popular means buy-in from a good amount of people. If what’s popular gets played then that means there are dollars following it. In this case, the masses are consuming a specific genre of music. The radio promoter advises Emery to do what is “popular” with his fan base, but what boundaries are you pushing when you follow the crowd? Is popularity more important than creativity when it comes to artistry?

Big music industry players find a goldmine (music trends) and exhaust it of its resources until they find the next goldmine to deplete.

A tale as old as time.

If artists are to just follow a “formula” then music simply becomes something that’s being recycled. What fresh take are artists taking if they’re approaching music (their art) in a “rinse and repeat” fashion? Creativity is forgotten, and music then becomes a creative black hole. Its innovation has creative guardrails limited to a proven bottom line tactic.

If you ever wonder why so much of the music you hear is proper shit, it’s because people like this – a super powerful radio promoter – still have a disproportionate amount of influence.

They basically think that you are stupid and will actively refuse to work on anything that falls outside of what they have decided you’re going to be spoon-fed that month.

I’ve had so many emails like this about ANALOG but for some reason this one to my manager triggered me enough to share. Slam my own music if you like but don’t you dare talk shit about my supporters 🤬

Anyway I am trying to be detached from the results of this album. I couldn’t have worked any harder on the music. I’m going to give everything I can to promoting the songs and live show. After that what happens, happens.