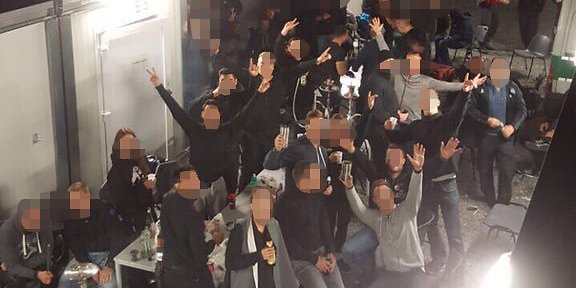 When the rave bug hits you, it hits you hard, and no one is exempt from it. Not even cops.

That is exactly what happened when three squads of the Berlin’s police force had to be sent home after partying too hard at a party they threw leading up to the G20 summit next week.

Berlin’s squads 14, 15 and 32 were actually stationed in Hamburg in preparation for the political event, and it is at their headquarters where they were stationed that they instigated a huge party that spiraled out of control. There they drank heavily, urinated in the open on surrounding fences, and engaged in public sex as loud music played.

The impromptu party took place at the Bad Segeberg container village that used to house refugees. In response to the allegations, Berlin police claimed the location they were housed in was essentially too boring, far from anything of interest to keep the officers busy during their stay and didn’t even have TVs.

To us it just seems like the officers were practicing for a night at Berghain/Panorama Bar rather than for the G20 Summit. While it may seem hard to fault them for that, Berlin’s interior minister Andreas Geisel (SPD) said: “If the allegations of the misconduct are confirmed, this must be properly settled in the police. The work of the Berlin police can not be damaged by such incidents.”

Featured image and info via http://www.berliner-zeitung.de/