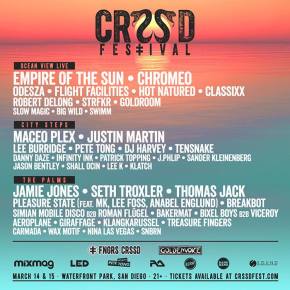 When travelers and partygoers think of the west coast of the United States, Los Angeles, Las Vegas, and San Francisco are the destinations that come to mind. However, California’s southern-most metropolis is home to a vibrant music scene, especially in the warmer months of the year. San Diego’s beautiful coastline and equally beautiful people make it the perfect place to hold a party by the ocean. That is why FNGRS CRSSD and Goldenvoice (think Coachella) are making it happen at Waterfront Park on March 14-15.

CRSSD festival boasts a wonderful roster spread across three stages and packed with big names in dance music that you would expect to see spending a summer in Ibiza, including Maceo Plex, Justin Martin, Jamie Jones (both solo and as Hot Natured), Seth Troxler, and the legendary Pete Tong himself. But in proper California fashion, the lineup includes an eclectic selection of talent with the likes of headliners Empire of the Sun, Chromeo, Odesza, and Los Angeles’s hometown heroes the Bixel Boys.

The 12-acre venue overlooking the San Diego bay will also feature local gourmet food and craft beers/cocktails to complete the mood. Be sure to snag your tickets on January 2 and get ready to party your heart out on the beautiful California coast.