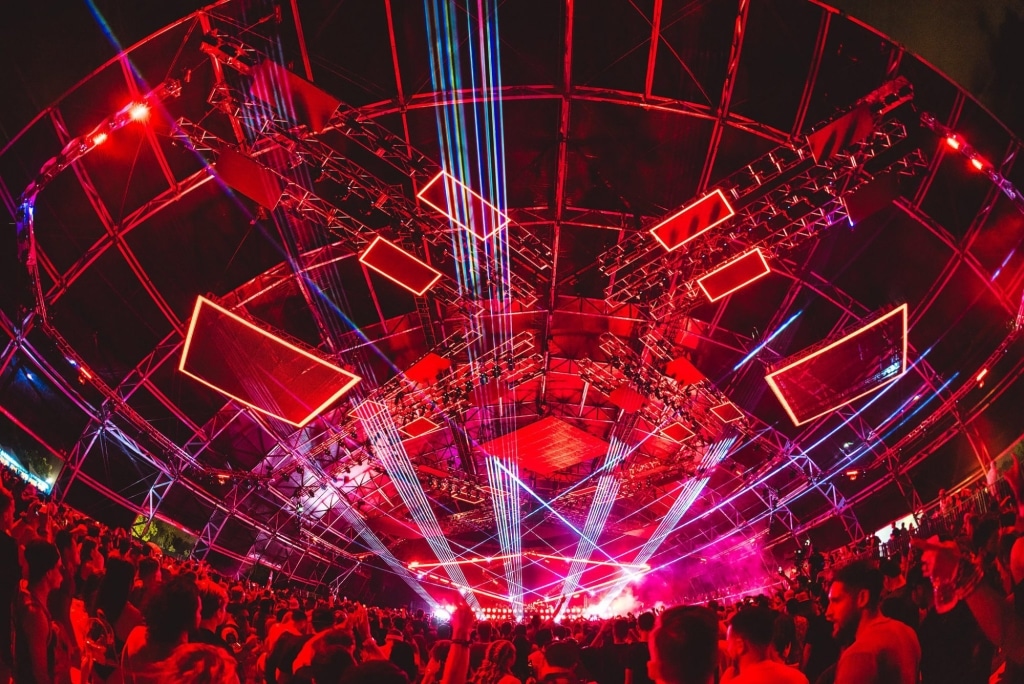 Highly anticipated Ultra Music Festival returns this weekend and features a fire lineup across the board. Female techno DJs Nala, Ann Clue, Anfisa Letyago, Amelie Lens, Giorgia Angiuli, Nina Kraviz, and Sama’ Abdulhadi are debuting at UMF’s RESISTANCE Stage. Whether up and coming stars or established names, these women are setting the stage for more inclusive representation in the electronic music festival scene. Some share a few thoughts about becoming better artists in a man’s world.

Nala moved to Miami with her family when she started college in 2011. She went to F.I.U. for Psychology and Advertising, graduating with a BA. While Nala was studying, she discovered and became instantly enamored with the industry side of Miami Music Week via Redbull Guest House. After quitting her job as waitress on the beach, Nala worked as a promoter. She later learned how to use CDJs and mix songs and began working the local circuit pretty hard for a couple of years. Once Nala graduated, she moved back to her hometown of Los Angeles. Nala’s family still lives in Miami and she considers it a huge part of her DNA as an artist.

“The path to being a good artist is a path of self-discovery. The more you get to know yourself – how you feel, what inspires you, what you believe in – that’s when you’ll be able to create better art. As long as you continue to be yourself, learn about yourself and speak your truth, you’ll never run out of fresh ideas.”

Nala shares something she learned early on in her career that made her a better artist.

Ann Clue has always had a passion for music for a long time. In the past few years, her energy and music established her both on stage, and behind-the-scenes, as one of the female artists who controls the dancefloors around the world.

Though she just started her career, she is already playing at numerous well known festivals, such as Awakenings, EDC LasVegas, Exit Festival, Time WARP, Sonus and OFFSonar. The past year she has traveled around the world for events in the US, Canada, Brazil, Argentina, Colombia, Australia, and Europe of course – only to mention a few of the 35 countries which Ann Clue visited in the past three years of touring.

She has an authentic aesthetic that made her a stand out in a male-dominated industry with lots of challenges and also imprints among her career. As part of the Fck-ing-Serious-Family, she found her power-up-mantra and is building up even more projects that will make you remember her name.

“Being me is my superpower. Being authentic instead of copying someone or something. Expressing myself exactly the way I am – cause there is no one like me. Everyone is different, and there exactly lies our biggest power.”

Ann Clue shares something she learned early on in her career that made her a better artist. 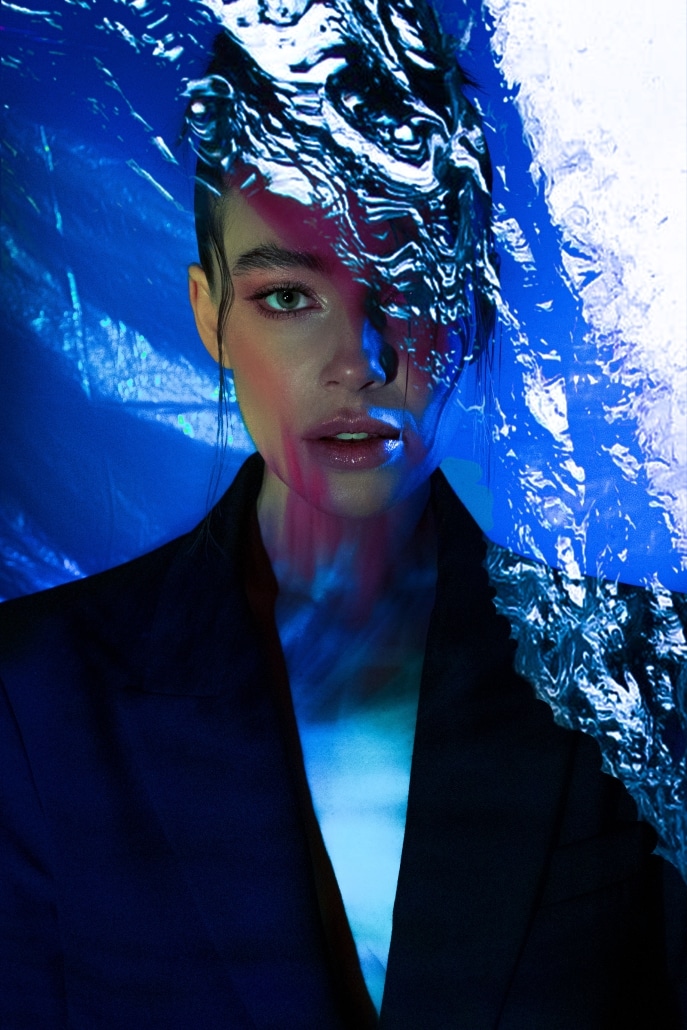 Anfisa Letyago has positioned herself as one of the most influential DJs and producers within the dance music industry. After moving from Siberia to Naples at the age of 18, she has since released her productions on a list of high caliber labels including Drumcode, Kompakt and Rekids. Anfisa decided to challenge herself artistically at the beginning of 2021, with the announcement of her new label N:S:DA, a name taken from ’Nisida’ – the Neapolitan island inaccessible to man. In January she launched the label with her debut EP Listen, followed up in April with NISIDA.

Read Next: Music Is Pure Emotion For Anfisa Letyago

Anfisa no doubt feels most comfortable in the booth, where she skillfully mixes tracks taken from various influences that have characterized her musical journey. She adds more groove to the trademark Techno sound that make her sets and tracks irresistible. Clubs and festivals have noted her latest releases and have been supporting her throughout – so you can expect to see her playing some of the most loved stages again soon, including this year’s Ultra Music Festival. 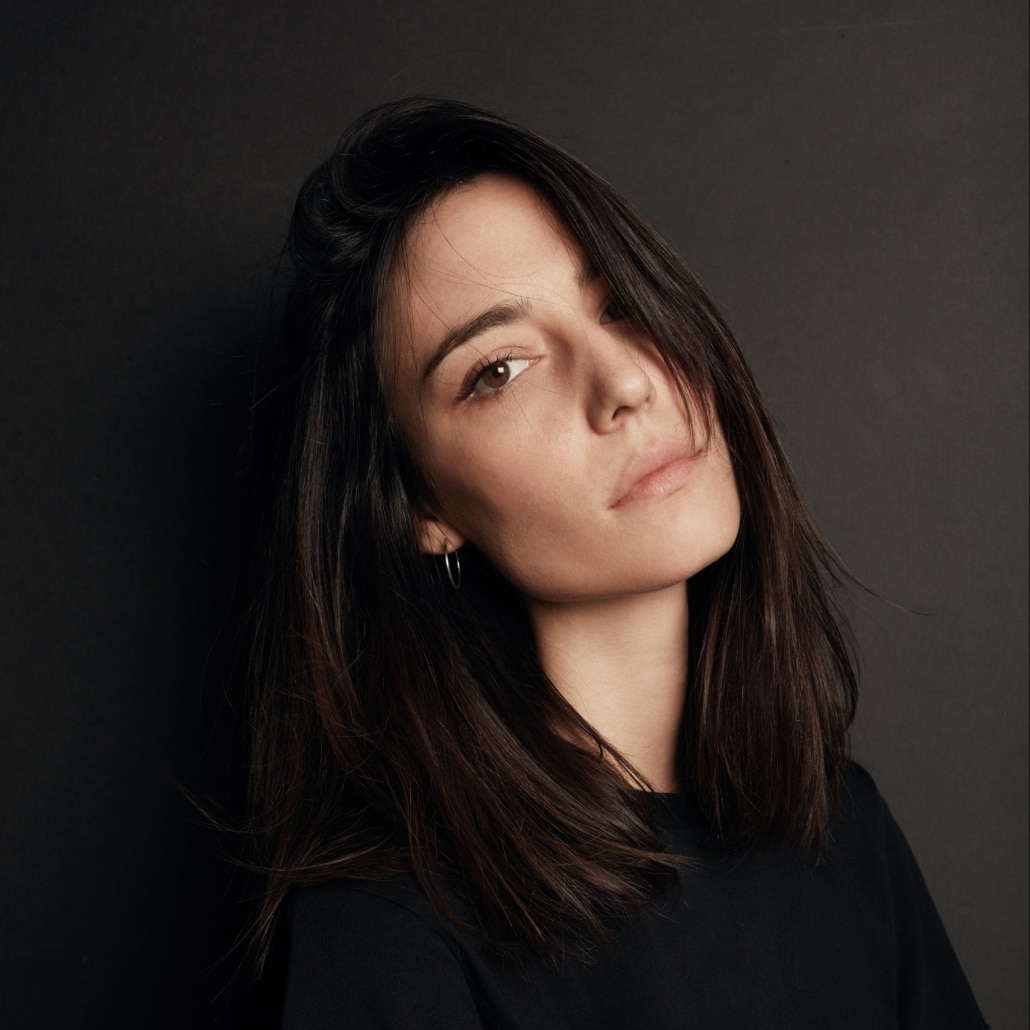 Amelie Lens is a self-confessed control freak. Every step of her journey as a DJ so far has been the result of her own obsessive attention to detail and laser-focussed determination which permeates everything she does. Nothing is left to chance. The often-referred to “explosion” with which the Antwerp native made her way into the global techno scene has been the result of a long-standing love affair with dance music, ignited by her first outing to Belgium’s Dour Festival at just 15 years old. Techno had Amelie at ‘hello’, and she spent the rest of her teenage years crossing Belgium by train to attend gigs, hypnotized by the new world that was opening up to her.

Read Next: ‘I cannot wait to finally marry you,’ Amelie Lens Says I Do

Her debut release came on Italian imprint Lyase, and soon after a trio of releases on Pan-Pot’s Second State gave her recognition on a global level. From headline club shows to peak-time slots at the likes of Sonar, Time Warp, Awakenings and Movement Detroit, as well as the legendary Circoloco at DC-10, whilst featuring on the coveted Mixmag cover and recording her first Resident Advisor podcast in 2018. At the start of 2019 Drumcode marked it’s 200th release by asking Lens to remix the label head’s 2014 release “Teach Me” – a milestone in her career that speaks volumes about Adam Beyer’s admiration for his younger counterpart, who describes Lens as having “a unique pure form of timeless techno. You can feel the passion when watching her – there are only a few DJs with that energy, that ‘it’ factor.” 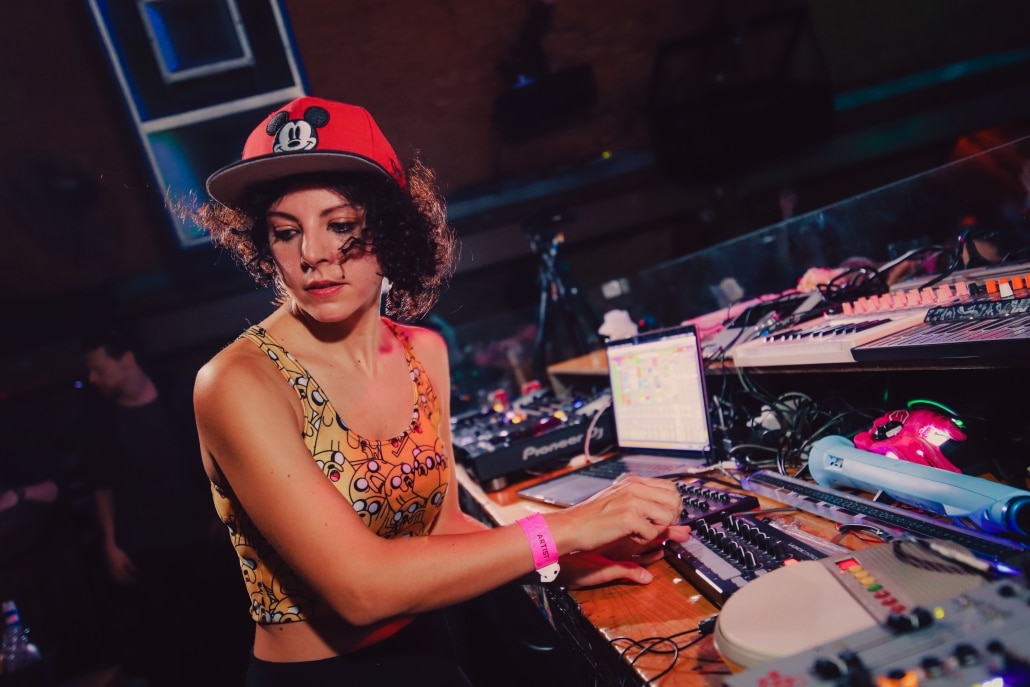 Giorgia Angiuli is a composer and multi-instrumentalist. She is part of the project We love on Bpitch Control Records and she has been resident performer at Tenax Club 1.0 in Florence for 2 years. After a classical music education, Giorgia developed in a short time a deep interest in electronic music and she started experimenting new live techniques. From the very first project Metùo she aimed to create a multi-sensorial performance mixing sounds, images and scents. She never stopped looking intensely for the interaction with her public.Stylistically Giorgia´s solo project moves between pop, techno, and house. She uses her voice to create a dreamy dimension intensified by the use of unique toy instruments. During her set she combines keyboards, drum pad and theremin with the sounds of toy flute, sax, trumpets and many other toys. Mixing all these samples and loops she shapes a vibrating and energetic groove that sets the dance floor on fire. She currently lives in Florence. 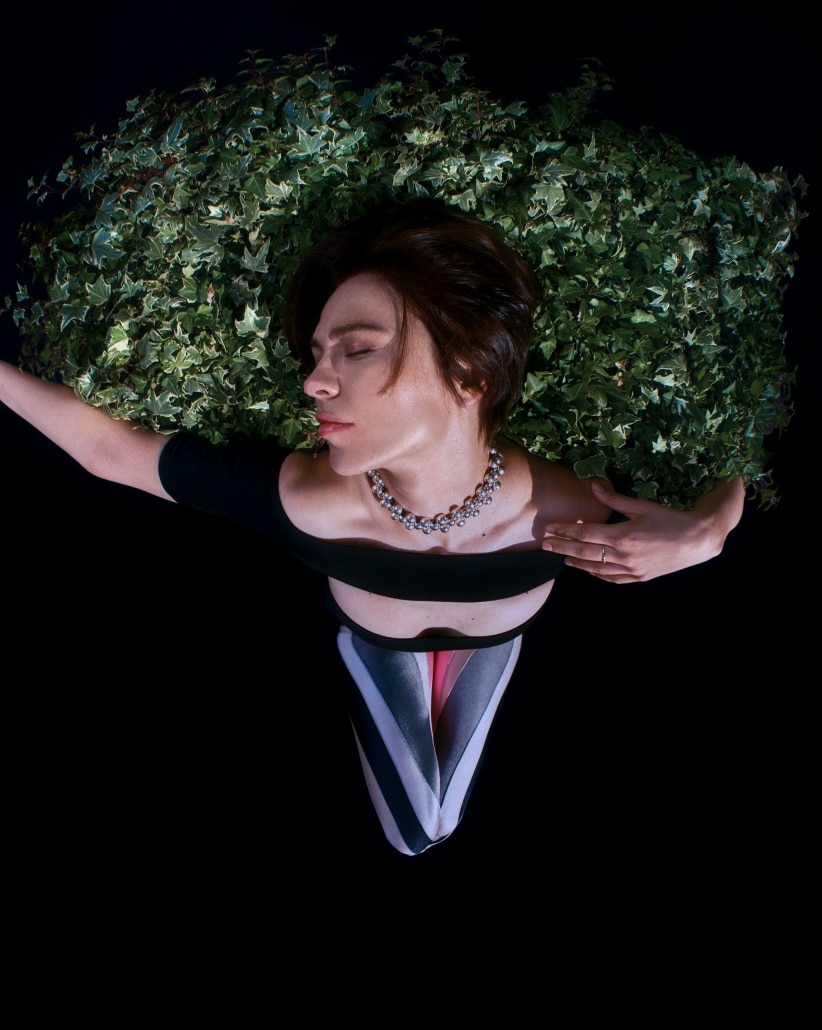 The internationally renowned Siberian electronic music artist Nina Kraviz is the most successful woman in her field: headliner of the world’s largest music festivals, acclaimed producer and the founder of two record labels трип (trip) and Galaxiid. Famous for an eponymous artist album and two critically acclaimed DJ mixes for fabric and DJ Kicks, Nina has become one of the foremost curators of electronic music today. In 2017 she was declared ‘DJ of the Year’ by Mixmag, cementing her status within the global music community. Nina reaches wider, deeper and further back in search of cosmic and inspirational sounds: she performs both at the world’s most unusual locations including the Eiffel Tower and Great Wall of China, and tears up underground club parties. 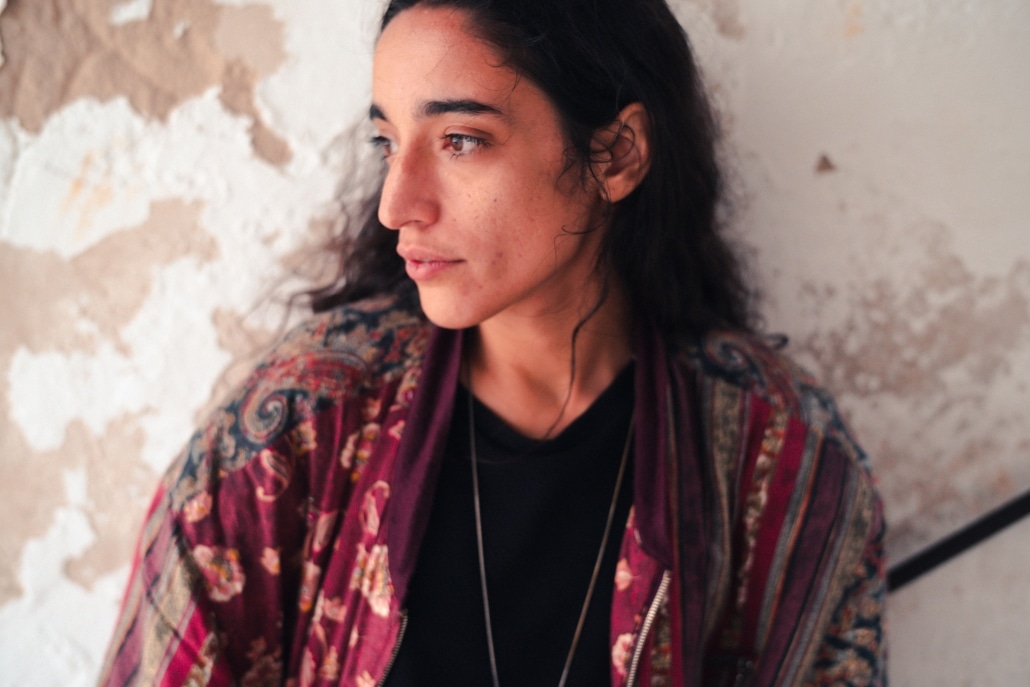 Sama’ Abdulhadi’s rise to becoming one of the first DJs to emerge internationally from Palestine can be traced back to Beirut, where she immersed herself in the burgeoning local techno scene. Her years in the Lebanese capital not only developed in her a singular musical aesthetic, but educated her as to the technicalities of mixing records and forming a narrative by doing so. Her sets, while rooted in high-octane, punchy techno, have a distinguished and defined ark, encompassing a broad range of sounds in their beginning and end. It’s a style that can be traced back to her teachers, two DJs who instilled in her the value of adaptation and track diversity. “The music is Berlin techno, but I perceive it in a Lebanese way,” Sama explains.

Read Next: Sama’ Abdulhadi, a Techno Rebel With a Cause

Much beyond the success, she’s already enjoying, Sama’s goal has always been to put Palestine on the musical map. While she continues to excel on all fronts, she uses her status as a rising touring DJ to support the growing number of musicians at home. Besides advising them on the challenges they’ll face, she helped set up Union, an artistic community in Ramallah that also serves as a platform for DJs and producers to better their skills.