Behind the Fake News: The mp3 Is NOT Dead, It’s More Alive Than Ever 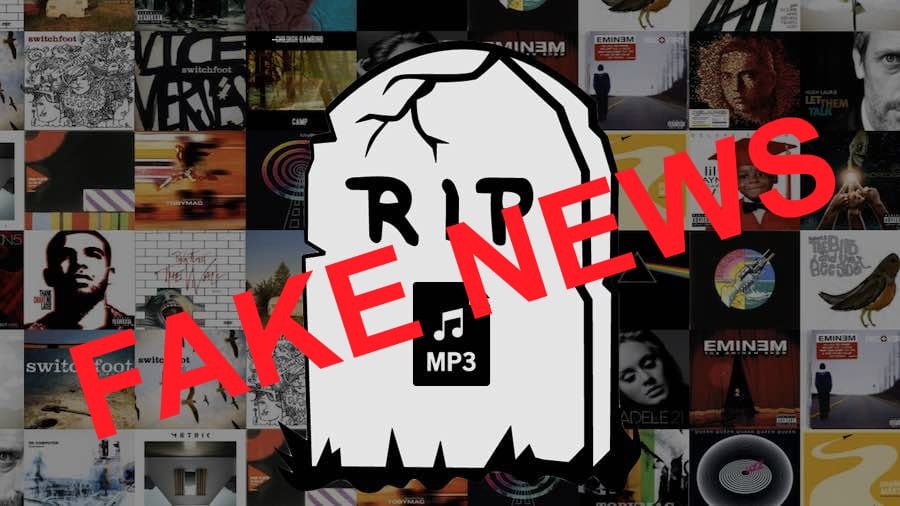 Behind the Fake News: The mp3 Is NOT Dead, It’s More Alive Than Ever

In the past few weeks you have likely read several articles, or at least headlines, proclaiming that the mp3 format is dead or will die soon. Some of these even came from authoritative sources in terms of music and technology, leading many to blindly believe that the death of mp3 was in fact real, and leaving many others to wonder what would happen as a result.

Resident Advisor stated that the “era of mp3 is over,” while those at Fossbytes announced that the “mp3 format is officially dead,”  and elsewhere at Gizmodo they announced that “developers of mp3 have officially killed it.” All these headlines, just like the countless others who followed suit with the hasty announcement, rushed to declare the death of the most popular audio compression format in circulation without examining all the facts. Interestingly enough it appears that they all regurgitated the same sensationalistic headline without properly reading the original statement of the Fraunhofer Institute and, above all, without confronting it against the sheer reality of the mp3’s role in today’s technologic world.

First of all, let’s examine what really happened: the only recent news, if we can really call it such since it’s been known for years, is that the latest American patents related to the mp3 format expired on April 16th, while in Europe they had all expired by the end of 2012. A few days later, on the 23rd of April, the Fraunhofer Institute, the former patent holder, published an official press release according to which the license for the mp3 format will be closed as the institute focuses its efforts on the AAC format.

To understand what is going on we must take a step back. What people may not realize is that the mp3 coding was in fact not public domain until recently, but was owned by the Fraunhofer Institute for Integrated Circuits, a German research institute holding several patents in the audio/visual industry. What this meant is that any software or hardware used to compress or play audio in mp3 format had to pay a license to this institution, which in practical terms means that some of the money you spent on your mp3 player of choice, for example, ended up in their pockets.

Now that all patents have expired, however, anyone can freely distribute tools to compress or decompress mp3, which means that the Fraunhofer Institute has no reason to demand the payment of the license and therefore terminated the program that was attached to that aspect of their business.

Let’s recap: patents on the mp3 format have expired and previous owners have decided and announced that they will be ending the licensing program. To go from this to saying that the format is dead is a little ludicrous to say they least. Some, in fact, may even argue that the expiration of the mp3 patents may now have the opposite effect, rendering the format really free for everyone to use and therefore making it much easier to produce compatible devices that rely on mp3. Ultimately this means that for those who produce audio content mp3 will likely remain the best choice to reach the widest audience possible.

Of course we aren’t denying that there are better alternatives on the table. AAC, the format the Fraunhofer Institute will focus on moving forward, is in and of itself a better producer of quality files, especially at very low bitrates, making it a better choice for some applications such as streaming. However, it is still protected by patents which makes its use not free. Other open-source codecs such as Ogg Vorbis have similar performance to the mp3 but are supported by a considerably smaller amount of devices, a problem shared by lossless formats such as flac, which provide superior audio quality but with limited compatibility and extremely low portability.

In short, we are faced with a situation that has happened several times in the past: mp3 may not be the best compression possible (after all, this is a technology developed in the late 1980s) but even Jpeg is not the best possible format for compressing images, yet both still enjoy a very long life. The reason for this is that with technology it’s not just performance that determines success on the market, but rather how the market adopts the technology in the first place.

Thus, considering the adoption of the market, it is more than likely for mp3 to enjoy great health in the coming years. To back this opinion we can give you just one numeric value: Mark Arment, Developer of Overcast, one of the most popular podcasting apps, recently stated that 92% of all podcasts in the Overcast database, over fifty million podcasts in total, are in mp3 format, not exactly the percentage of a dead or dying breed.

If, then, in a distant future, the mp3 really ceases to be used for audio playback, most files in mp3 format will probably never die anyways: the idea of ​​compressing audio by eliminating frequencies outside the audible spectrum is the basis of most other formats anyways, and the authentic audio revolution that the mp3 brought to our ears over the last few decades will remain in the history books forever.