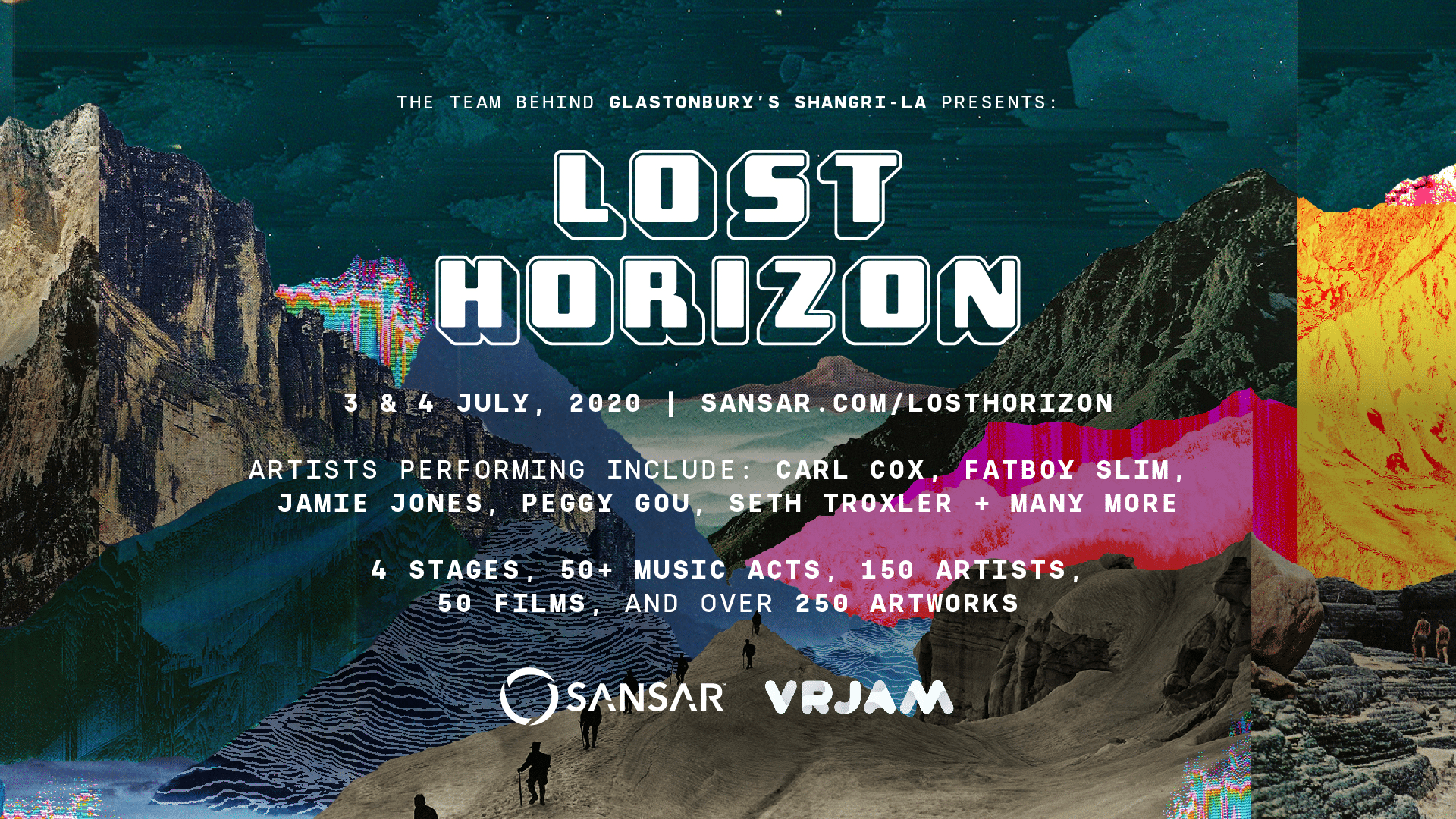 Lost Horizon is a real festival in a virtual world. The team behind Glastonbury’s Shangri-La presents a multi-stage event that can be explored in more than one way. Lost Horizon is opening its online doors via PC and virtual reality (VR) for a fully interactive experience. No VR gear? No worries. Music lovers can also join via its mobile app or tune into the live-stream via Beatport or Twitch on July 3 – 4.

A concept from Shangri La’s, an outdoor art gallery aimed at inspiring and educating, it’s no surprise the virtual festival pushes creative boundaries. The team behind Lost Horizon wanted to do something more, something different. “We were not up for a simple streaming session so we really started looking into our options,” says Robin Collings, the founder of Shangri La. “That’s when we met the guys at VRJam and Sansar who had been working on this mega platform for years. We had the cultural momentum and creativity, and they had the tech. It really was a meeting of the minds. This was only two months ago which seems mad considering the scale of the project now.” The virtual music festival has come together thanks to a collective effort including support from BBC Radio 1 and Amnesty International. 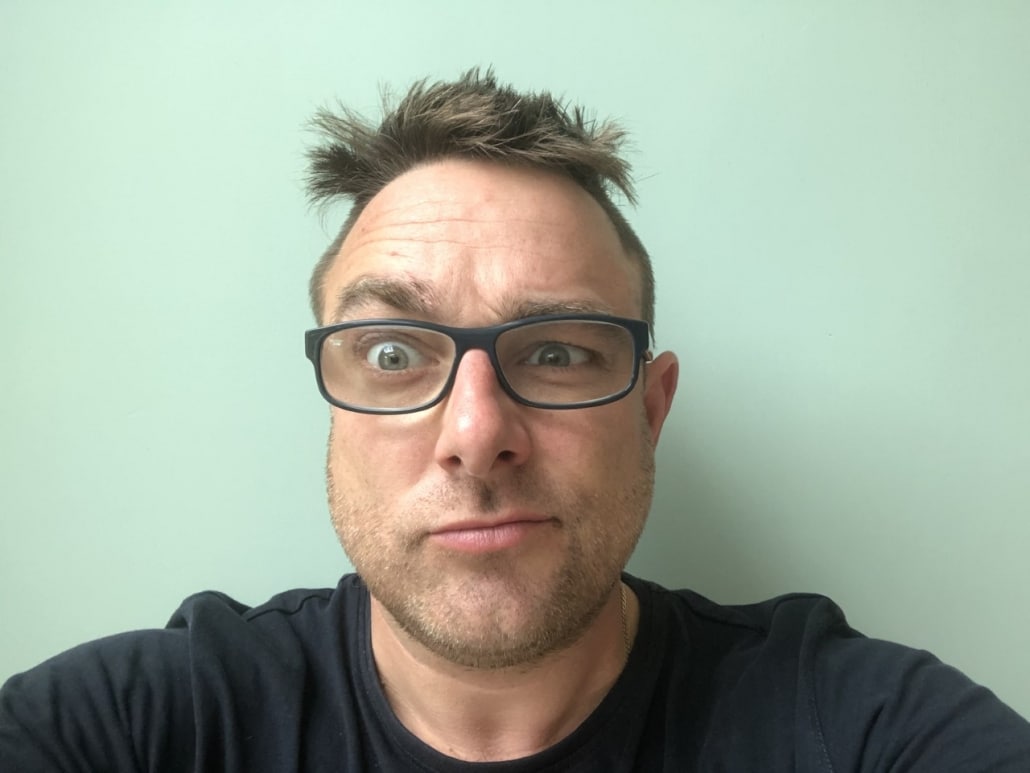 Everyone involved with bringing Lost Horizon to life worked quickly and swiftly. “Kaye Dunnings the Creative Director is a real visionary! She laid out her vision for the space, how people [would] interact with it [and] what it would look like,” says Collings. “None of us has slept a full night since, working in multiple time zones and doing a year’s worth of work in seven weeks.” If you build it, they will come.

What the World Needs Now…

What we look like, and where we live are not our defining attributes! This whole VR thing can be a metaphor for that. It’s truly global, and the things that might seem to divide us are largely irrelevant in here. We should embrace that in the real world.

Learning from the VR world to create a better “irl” place, Robin Collings

An Inside Look: The World’s First Fully-Immersive VR Music Festival

One of the ways the team at Lost Horizon is giving audiences a new take on music is through their “Party in a Box” (PIAB) VR feature. With Sansar’s interactive PIAB console, performers can deliver stadium-sized live production within their own virtual venues at anytime and from anywhere. Lights, lasers, walls of fire, even zero gravity the whole nine years. They’re all triggered in real-time from a virtual toolkit the artist teams control.

We are all about experimental creativity. I, personally, am really keen to see how the audience interacts with the whole project. How people in VR will be on a dance floor for example. Will they be leaping around hands in the air shouting for a reload, or will they [be] more reserved? Will they interact with people and make new friends? Find love?  Have crazy experiences that shape them like we all do at festivals or will it be more like a gaming experience? It’s going to be really interesting!

Organized chaos is the world Collings lives in, and now he has keys to unlock another door–the virtual experience. For anyone who has organized events, you know that the day of is always an adrenaline rush. Collings shares how excited he is for the first VR music festival of its kind.”Just before a big show, I’m totally high energy output and excitement. The only difference [this time] is that I’m normally wearing work boots, two radios and tearing around a festival site in a buggy at this point but this time it’s managing a vast team of coders, artists and media platforms,” says Collings.

I think it’s much harder for an artist to perform to a camera in a studio than it is at a festival or club. The feedback from the audience is such a big part of the performance element of a set, so we’ve been working hard to have some vibe providers in the studios. A small, but excited audience, giving the artists some love as they play their sets. It’s been a lot of fun getting it all ready to go to be honest and the performers have been amazing.

Robin Collings on translating vibes from “IRL” into the virtual world

The Look and Feel at Lost Horizon Festival

Gas Tower serves as the beating heart of Shangri-La, and a home base for some of the planet’s most iconic electronic artists curated by the Orca Sound Project. Fans will get to catch VJ/DJ sets from headliners like Fatboy Slim, Carl Cox, Peggy Gou, Seth Troxler, Jamie Jones, Pete Tong, John Digweed and Sasha. 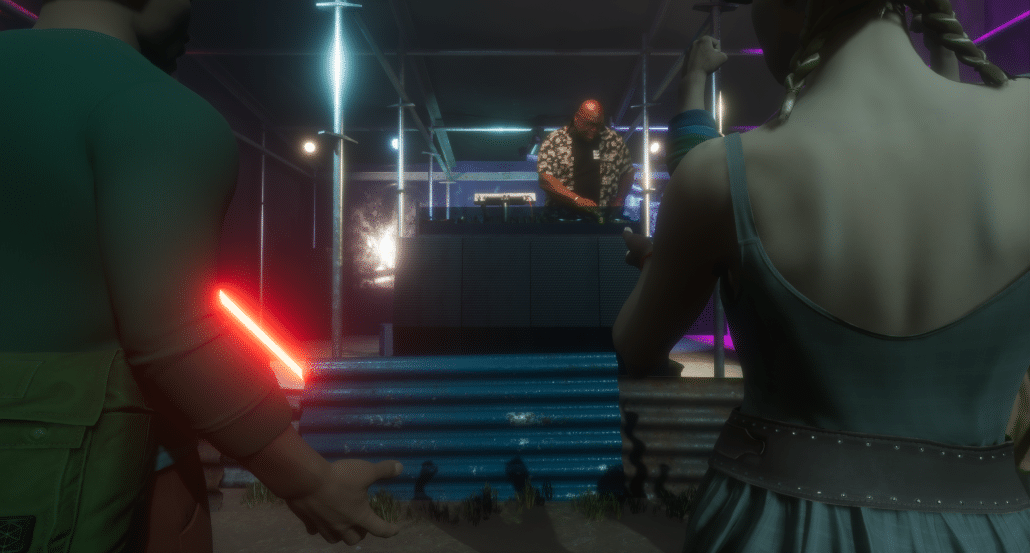 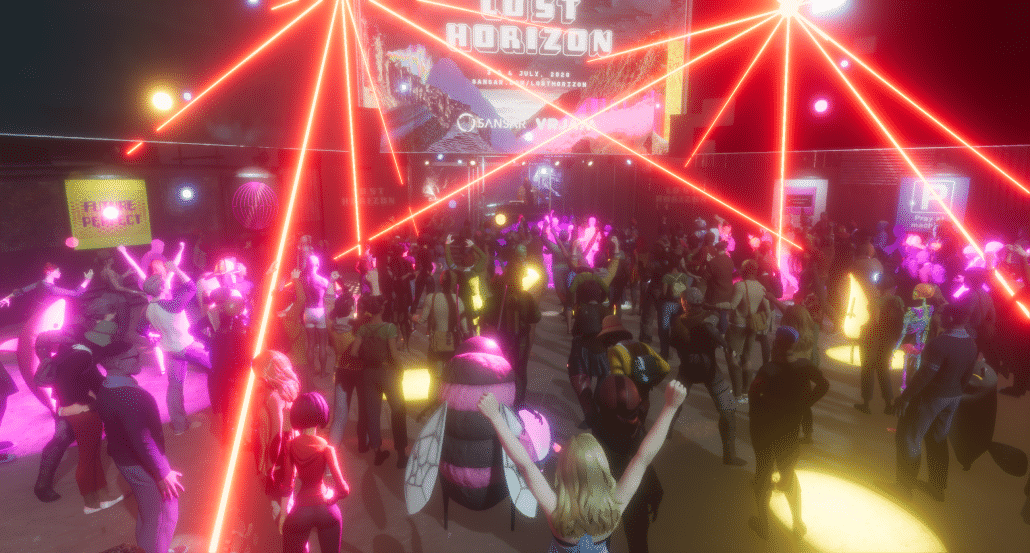 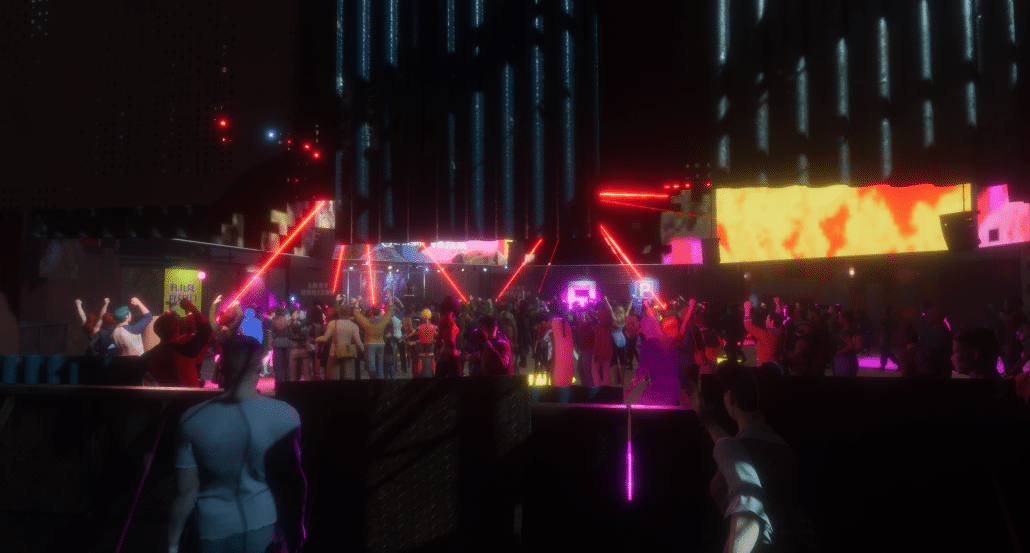 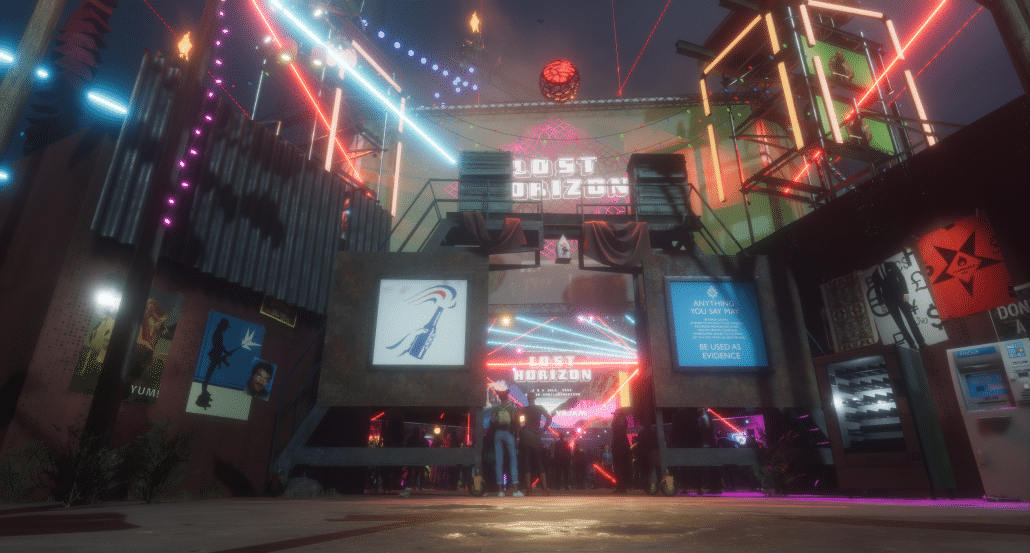 Freedom Stage, shaped after the IRL Truth Stage, shines a light on some of the best local emerging talents from a wide range of cultures and communities. Performers include A.Skillz, Coldcuts, The Nextmen, MY BABY, Frank Turner and Krafty Kuts. 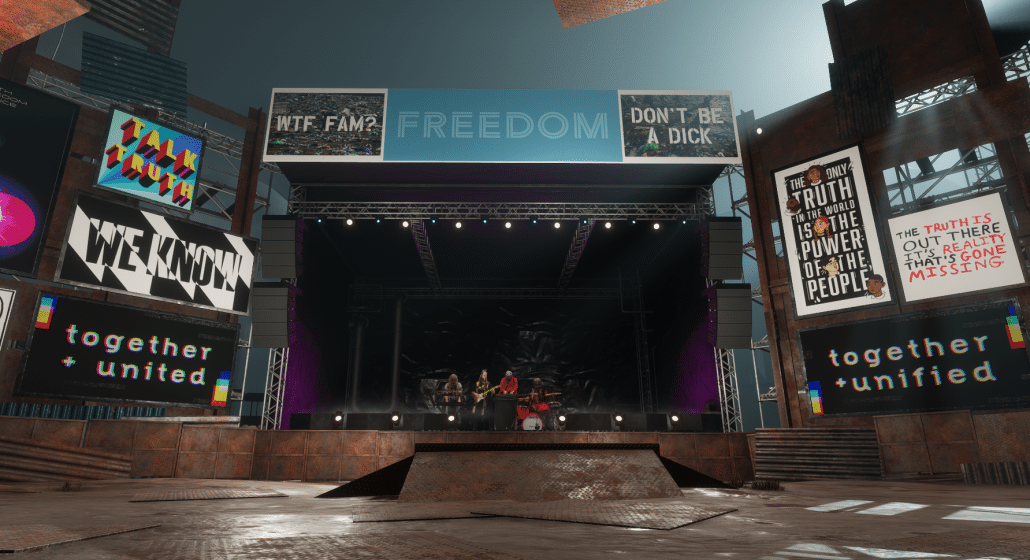 Nomad Stage has been created custom for Lost Horizon, in recognition of the 30th anniversary of the Travellers’ Field – the heart of the free party movement. The space will feature artists from a range of labels, including 24hr Garage Girls, Amen4Tekno Records, Born on Road Records, Hospitality, Kaotic Kartel and others. 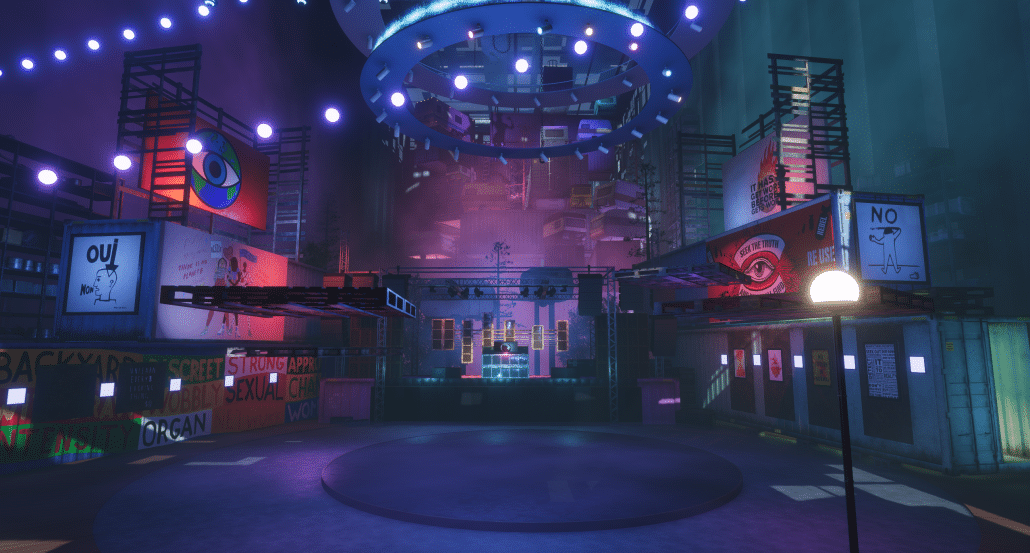 SHITV (Shangri-La International Television) will broadcast everything from the absurd to the enlightened, from the sidelines, frontlines and backstages of alternative culture. The venue will show films, documentaries, theater, live art, comedy, animation and talks.

Music, A Reason to Celebrate

Make sure to catch Lost Horizon Music Festival during the Fourth of July weekend. Not sure which stage to go? Watch it in “SquadMode” via Twitch. While this probably won’t be the last of its kind, Collings reminds people the importance of adapting to new situations. “Mutate to survive! These crazy times will require a lot of creativity and compassion. We need to find ways of building bridges and connections to counteract the global changes around us, but we should all remember that we are all the same.” Keep on keeping on.