It’s only May but the DJ Mag Top 100 poll is already being discussed, and as always the discussion eventually leads to the subject of vote buying and the true veracity of a poll that once used to be regarded world over as a standard metric for the industry.

The reliability of the DJ Mag Top 100 poll is long gone and there is absolutely no doubt about that for anyone who has looked at it objectively, and especially with all the proof that has come up in years past. Evidence has come up of artists morally questionable methods to get votes, such as when Dimitri Vegas and Like Mike had girls go around Tomorrowland with iPads asking festival attendees to vote, or when Bollywood celebrities were recruited (and paid?) to promote the voting of specific artists.   It has even become a subject of parody by established artists the likes of Gareth Emery and Ashley Wallbridge, who made fun of the corruption behind the pool with a hilarious video.

The evidence of corruption doesn’t end here. Yesterday we were sent a detailed e-mail received by a prominent electronic music producer and DJ where he was being sold services promising him votes for the DJ Mag Top 100 Poll. There’s legitimate websites where DJs can pay to receive votes, a lot of them backed by similar promises such as the following one which was part of the e-mail we were forwarded:

All our votes are done manually and with the real people, different IP address, Facebook, Gmail as we have already said we will give you video proof of the votes that we made for you each day video uploaded on Dropbox.We do this job for the last 7 years and is always our client entered the DJ MAG TOP 100. We can guarantee that you will not have problems with our service and most importantly you will have a discretion so that no one will know that we are working with you.

We are aware that the e-mail, which you can read in full below, contains grammatical and spelling errors. We are also aware that the system used to cheat on the DJ Mag Top 100 poll is not unlike that used by similarly-operated social media click farms located in countries such as India, Bangladesh, Mexico, etc. 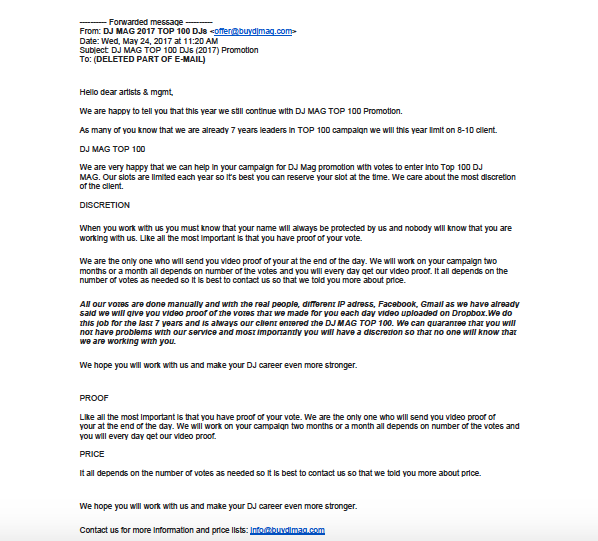