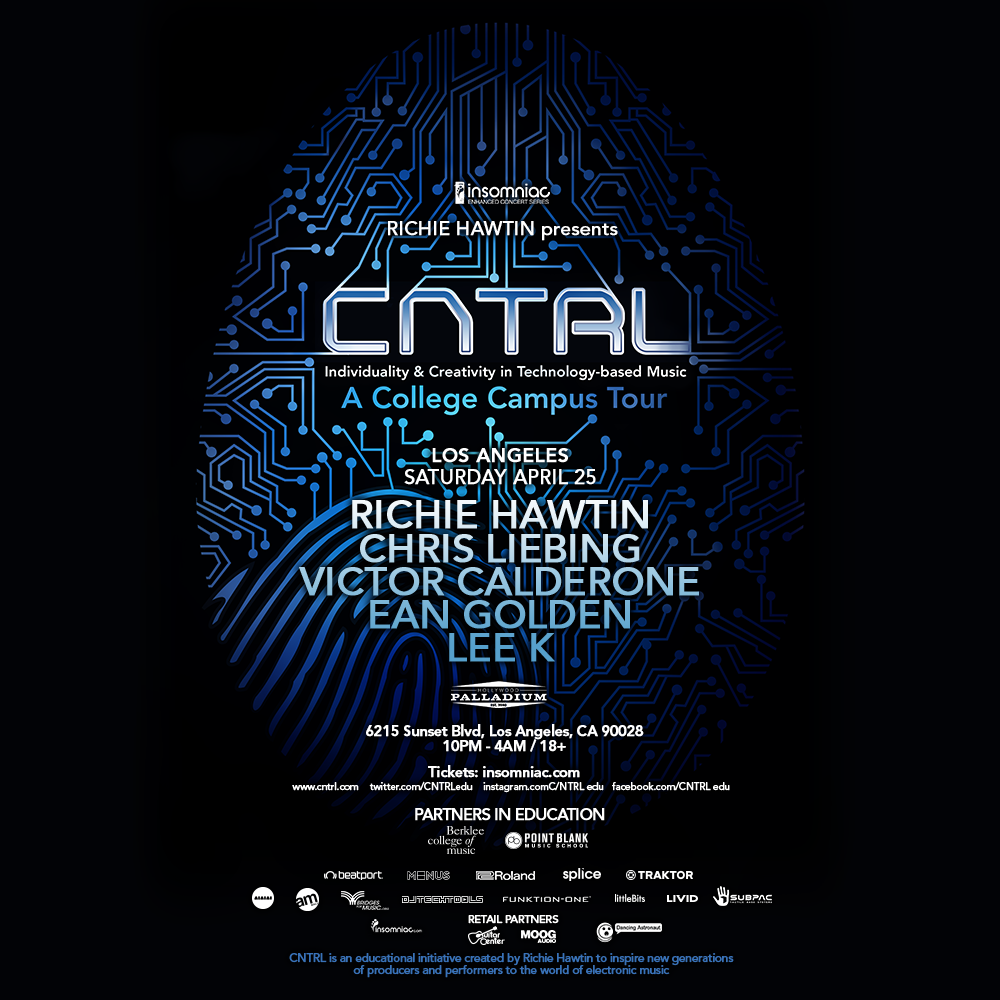 Richie Hawtin‘s CNTRL tour brought a new kind of event to college students across the country, hitting 8 campuses in 10 days (quite an impressive feat considering the distance between cities). However, this was not your typical “college tour” –  CNTRL featured lectures and equipment demos from the man himself, several other artists, and some of the industry’s leading tech companies (followed, of course, by  amazing afterparties). We were lucky enough to make it to the both the UCLA event and the afterparty this past Saturday, and here’s our comprehensive breakdown of the weekends events.

Co-hosted by UCLA’s EDMC (as well as its extremely helpful and dedicated staff) and Music Industry Program, the UCLA CNTRL event was held in the Jan Popper Theater at the Herb Alpert School Of Music. The room was packed without an empty seat. It was truly amazing to see students lined up all the way around the building for a techno-related event, eager to further explore the intellectual side of techno with some of the genres brightest minds. Across the hall from the theater was the tech marketplace, where some of the top companies in the music tech industry brought an arsenal of gear and software for anybody to use, and naturally we took advantage of this. 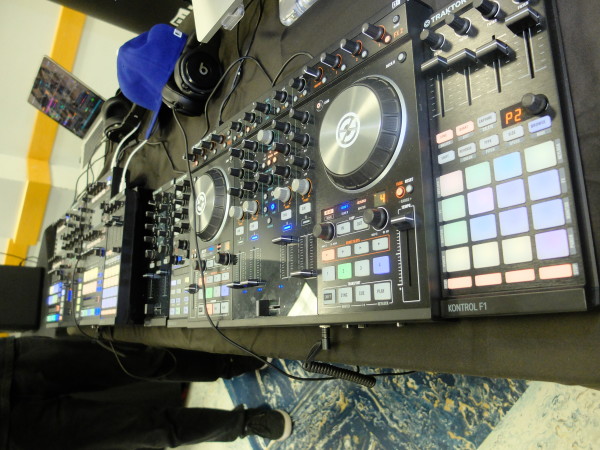 Native Instruments came with a number of controllers, most notably the D2 and the S8, along with several laptops running Traktor software. Richie Hawtin has been a long-time public supporter of the Berlin-based company, and over the years Native Instruments has grown from a software company to a dominant force in all sectors of the electronic music technology market, including DAW software, plugins, hardware, DJ gear, controllers, and much more. Point Blank, one of the world’s leading schools for electronic music production made a special appearance at both the tech marketplace and the lecture, participating in Hawtin’s discussions of technique, experimentation, learning, and training. Joined by Victor Calderone, Chris Liebing, Ean Golden, and singer Grimes, Hawtin gave an insightful lecture accompanied by a demonstration of several elements of his live performance setup in a masterclass hosted by Point Blank. All of the other artists got to weigh in as well; after the lecture, they opened the room for questions, and people lined up to say hello afterward. 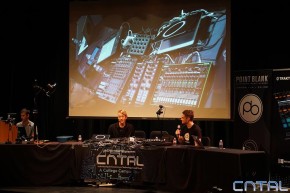 The lecture opened with a discussion of live performance in dance music and injecting human feel into otherwise mechanical grooves. Using a TR-8, Ableton Push, and Traktor with a variety of Native Instruments controllers, Richie Hawtin demonstrated a number of live performance techniques he has developed over the years. He stressed the importance of breaking the monotony of 8 and 16 bar loops over and over again, adding that the best way to get lost in the groove is when it is ambiguous which bar is the beginning of the phrase; Richie does this by using obscure loop lengths, bringing new elements in at unexpected moments, and making endless variations on relatively simple material. His workflow, he explained, does not involve digitally syncing Ableton and Traktor, which he avoids for two reasons: first and foremost, differing latencies between the computer programs can cause the musical elements to get out of time with each other. This can be avoided by “beatmatching” the programs by “nudging.” Additionally, not syncing allows him to be free from the monotony that syncing requires; tempos can be adjusted in one program while the other remains independent. 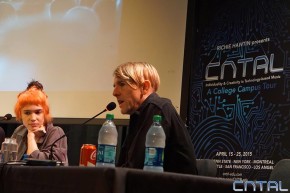 “The time you spend in the studio is never wasted time, even those days when you’re uninspired.” – Richie Hawtin, CNTRL LA

While the lecture demonstration featured software and hardware, Richie also discussed the role of playing records in a live set, noting that DJ and Live sets don’t have to be mutually exclusive. He adds that the DJ is responsible for creating what he calls the “third record”; this metaphorical record is created when a DJ assembles a whole that is greater than the sum of its parts. This can be done by blending records, layering instruments/drum machines, sampling, looping, tweaking FX, and more; he adds that historically, EQ has played an enormous part in the creation of this third record. Often, DJs will crank the highs all the way up for a few bars, creating a sharp, crispy slap, or kill the bass to create a type of low-end vacuum. When the knobs are tweaked, the crowd experiences new musical elements that are not present in the original record.

After the demonstration of live techniques, Richie talked about playing around and figuring out how the gear works since they didn’t have manuals for the used gear they bought back in the day and had no idea how to use it – they had to blaze their own trails with the technology, and that forced them to spend massive amounts of time experimenting with the gear. 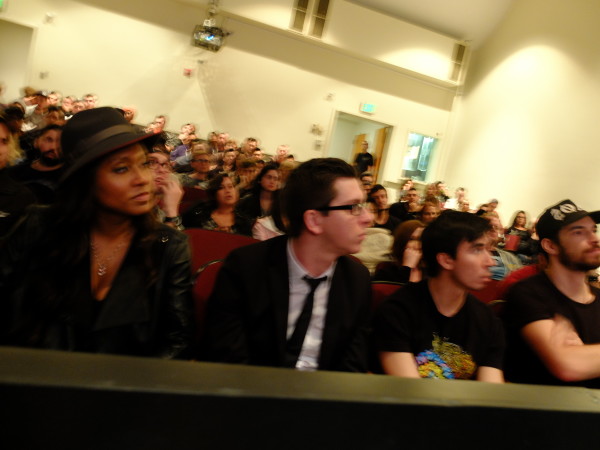 Finally, the floor was opened for questions, and virtually every hand was in the air. One student asked about the place of experimentation, and Richie explained that he is driven by what feels right inside of him, and will continue to do so, experimenting when he feels so inclined. However, he emphasized that while experimentation and innovation are important, they should only be done in an authentic manner that doesn’t betray one’s artistic essence and alienate. This led to an intriguing dialog between Richie and friends about authenticity in music; the consensus was that all that matters is making music that feels right to you. As Victor Calderone pointed out, it’s easier and faster to make music that comes from inside your heart.

Another student asked about promoting oneself as an artist and how to find a label; Richie dismissed the notion that you need a label to get started with your career, noting that the most important thing was enthusiasm and support from your friends. As he told us, if one person in the room produced a track and every person in the room shared it on their social media, that would get the ball rolling. Long-hailed as the king of minimal techno, Hawtin comes from a DIY underground culture, and he explained that a lot of whathe did marketing-wise was just trial and error, just it was when he was learning how to use the equipment he has come to master. 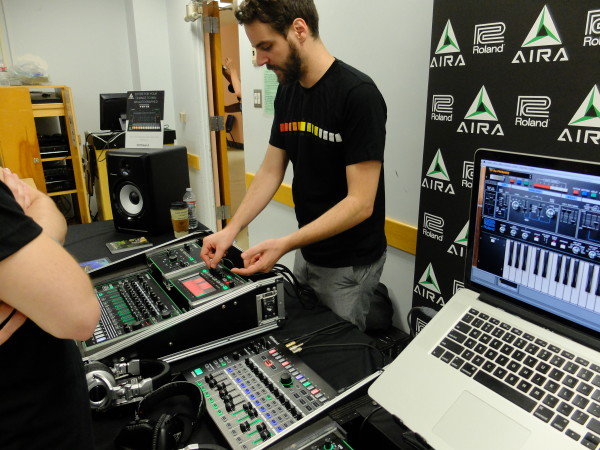 The tech marketplace opened at 2:00, 2 hours before the lecture, and remained open during and after the lecture. I began at the Roland booth, where they had set up a number of AIRA instruments, including the TR-8, TB-3, VT-3, MX-1, and System-1. With 5 machines and 5 pairs of headphones, it was evident that a proper jam session was in order – I rounded up a few students and we just started playing around. Next was Subpac, a unique “Tactile Bass System” designed to provide low end enhancement in instances when a subwoofer is unavailable or unpractical, and can either be fastened to a chair or worn on the back. In addition to being well-suited for studio use, this product is an amazing option for DJs as it makes beatmatching a breeze. 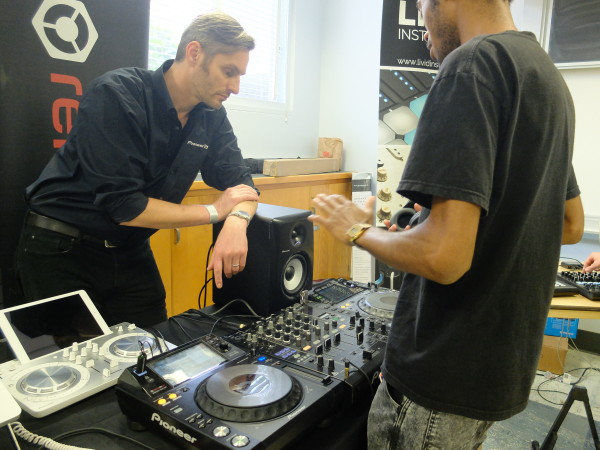 Pioneer, a company that needs no introduction, was there in full force to promote their CJDs, controllers, speakers, and new rekordbox update. The booth was packed all day, as dozens of DJs went B2B with friends and strangers alike, and their staff were very helpful, teaching a number of younger students how to use the gear. One of the most iconic brands in the DJ industry, the Pioneer booth was the first stop for many attendees at the tech fair. The last booth we were able to check out was Splice, a free service for artists and producers designed to facilitate musical collaboration; essentially, you sync project files, presets, and samples to a cloud, and they can be shared via the website for collaboration with producers around the world. Projects can be shared as open, public, private, or secret collaborations, and major artists such as Richie Hawtin, Daft Punk, and Skrillex have used the service. Supported DAWs include Ableton, FL Studio, Logic, and Garageband, although they are currently taking requests for new software to include. 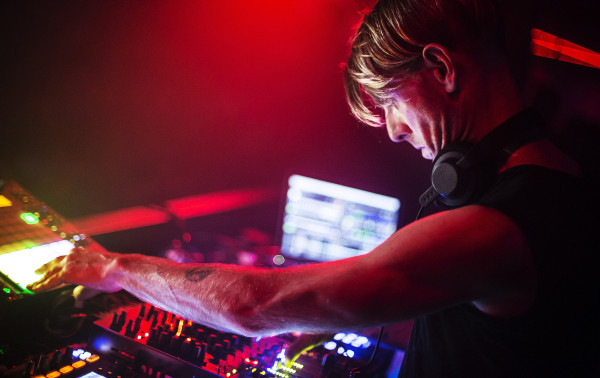 After the CNTRL event at UCLA was over, we made our way to the afterparty, hosted by Insomniac Events. It had already been a long day of excitement, but we knew things would be getting even more exciting. The Hollywood Palladium was perfect for the event, large enough to comfortably accommodate the crowd and without a bad view in the house. The show, with performances by Lee K, Ean Golden, Victor Calderone, Richie Hawtin, and Chris Liebing was seven hours of techno heaven. Lee K got things started nicely weaving between smooth house cuts, with a highlight being the tropical flows of Supernova’s edit of the classic Beat Me Back.  Ean Golden kept the crowd warmed up on some nice vibey grooves and started picking up the pace with the well known Radio Slave anthem, Don’t Stop No Sleep. For a warm up set the Radio Slave track seemed a bit out of place, but Ean was quick to re-calibrate the vibe setting it up appropriately before Victor threw down some chunky tech-house fire. 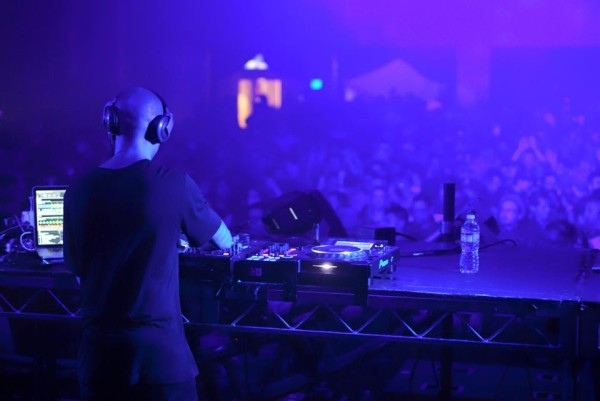 Victor Calderone getting the crowd ready for Richie.

As Victor stepped away from the booth, Richie tapped in with some minimal bliss, hypnotizing us in a sea of rolling basslines and glitchy percussion. No real point in attempting to ID any tracks as it was a master-class in beats and technology. Arguably the best part of Richie Hawtin’s set was the final twenty minutes where he slowed the pace down and crafted cerebral minimal textures to a welcoming crowd. To end, Chris Liebing kicked the energy up to a whole new level, delivering a barrage of heavy thumpers all the way to 4AM closing time. Unfortunately it appeared as if tiredness kicked in as the crowd was not as energetic as they could have been during the massive techno display that Liebing put on. That being said, any fan of CLR and techno would have had a great time during his set…perhaps it was just a little much for some of the fresh crowd. 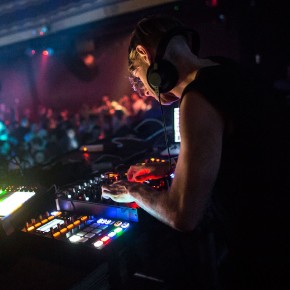 Looking back on the event and the tour in general, it is safe to say that CNTRL was an enormous success; the UCLA event saw a a tremendous student turnout, although it drew a great deal of fans of all ages. Families, children, students, and adults came together, united by a love of music and technology, and we can only hope that the future will hold more events like this one. Although much of mainstream society doesn’t know it, Techno is and has always been an intellectual phenomenon, and it’s great to see these kinds of innovative presentations embraced by the academic community.