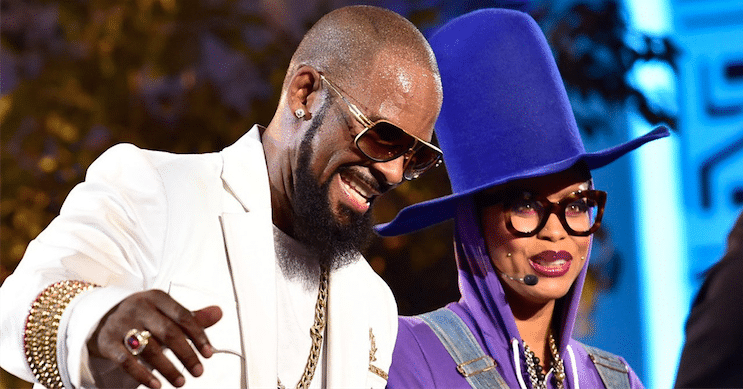 This past weekend Erykah Badu went on public record to defend R Kelly during one of her gigs in Chicago, despite the recent string of sexual abuse allegations levied against the r’n’b artist, and the increased scrutiny these allegations have been receiving following Lifetime documentary Surviving R Kelly.

Badu made the comments in support of R Kelly during a concert at Chicago’s Aragon Ballroom on January 19, stating:

The comment drew boos from the crowd, to which Badu promptly responded:

“What y’all say, fuck him? That’s not love. That’s not unconditional love. But what if one of the people that was assaulted by R Kelly grows up to be an offender, we gonna crucify them? “They ’bout to R Kelly me to death on the internet, I’m like goddamn. I just want peace and light for everybody and healing for those who are hurt because everyone involved has been hurt, victimised in some kinda way. Love for everybody.”

Fans expressed shock at Badu’s comments on Twitter following the concert, as was expected given the increased media attention surrounding the strong allegations against R Kelly and the increase in popularity of the Lifetime documentary that went live in recent weeks.

I really want to say how much i loved Erykah Badu’s concert tonight.

But i can’t get over how she tried to justify and defend R. Kelly’s actions and reputation during her set… I’m so disappointed…

Badu expressed her opinion on Twitter following the incident.

I love you. Unconditionally.
That doesn’t mean I support your poor choices.
I want healing for you and anyone you have hurt as a result of you being hurt. Is that strange to you ?
That’s all I’ve ever said. Anything else has been fabricated or taken out of context. – eb

Needless to say, however, the criticism continued on the social media platform.

If you’re going to show him love & forgiveness … at least address his wrongdoing instead of MINIMIZING it. Cause I bet if you left Mars & Puma alone with the man they would be UNSAFE. Just like the rest of the lil Black girls you refuse to acknowledge smh