ENOUGH With The Daft Punk Tour Rumors And Click-Bait Articles

ENOUGH With The Daft Punk Tour Rumors And Click-Bait Articles

UPDATED Jan 12 2017: Today marked the 67,456th day of unfounded Daft Punk rumors (just kidding, but really!). The interesting thing is that this article was first published in in 2016 and is just as applicable today as it was then, considering the recently surfaced YouTube video many are alleging alludes to a Daft Punk tour in 2017.

The video, which you can see below, has now received a staggering 385,000 plus views in a matter of 12 days. It has been re-shared by music blogs world over and used as “source” to propagate Daft Punk Alive 2017 rumors by these very same blogs without any real foundation. It’s essentially ALL click-bait.

For the past 9 years, music blogs and fans alike have been speculating on the possible return of Daft Punk. The French duo last toured in 2007, officially playing live only once since, at the 2014 Grammy Awards in support of their Grammy Award-winning album Random Access Memories.

While eager fans cannot be blamed for clinging onto the smallest of possible clues hinting to a Daft Punk return on the road, dance music news and blogs have also been jumping on the bandwagon to report on “alleged” and “possible” tours for countless years now. The latest of such unfounded rumors was spread today by most of the relevant news outlets in circulation. To say that the internet is currently flooded by what can only be regarded as completely speculative news would be an understatement.

It all began on Reddit when a user posted claiming that “Lollapalooza has a Daft Punk page on their website,” resulting in many outlets reporting the finding as reliable source of information that the duo “may” be touring in 2017. Most articles went on to speculate that since Daft Punk toured in 1997 and 2007, 2017 would mark a new 10 year anniversary of their schedule and thus “made sense”. The Reddit thread followed an apparent Lollapalooza Chile lineup leak that depicted Daft Punk on the lineup as second billing, a specific detail which led many to think that it was a hoax.

While Daft Punk’s spokesman declined to comment to NME about future live shows, a separate source told Consequence of Sound that Daft Punk has no plans to perform live next summer. 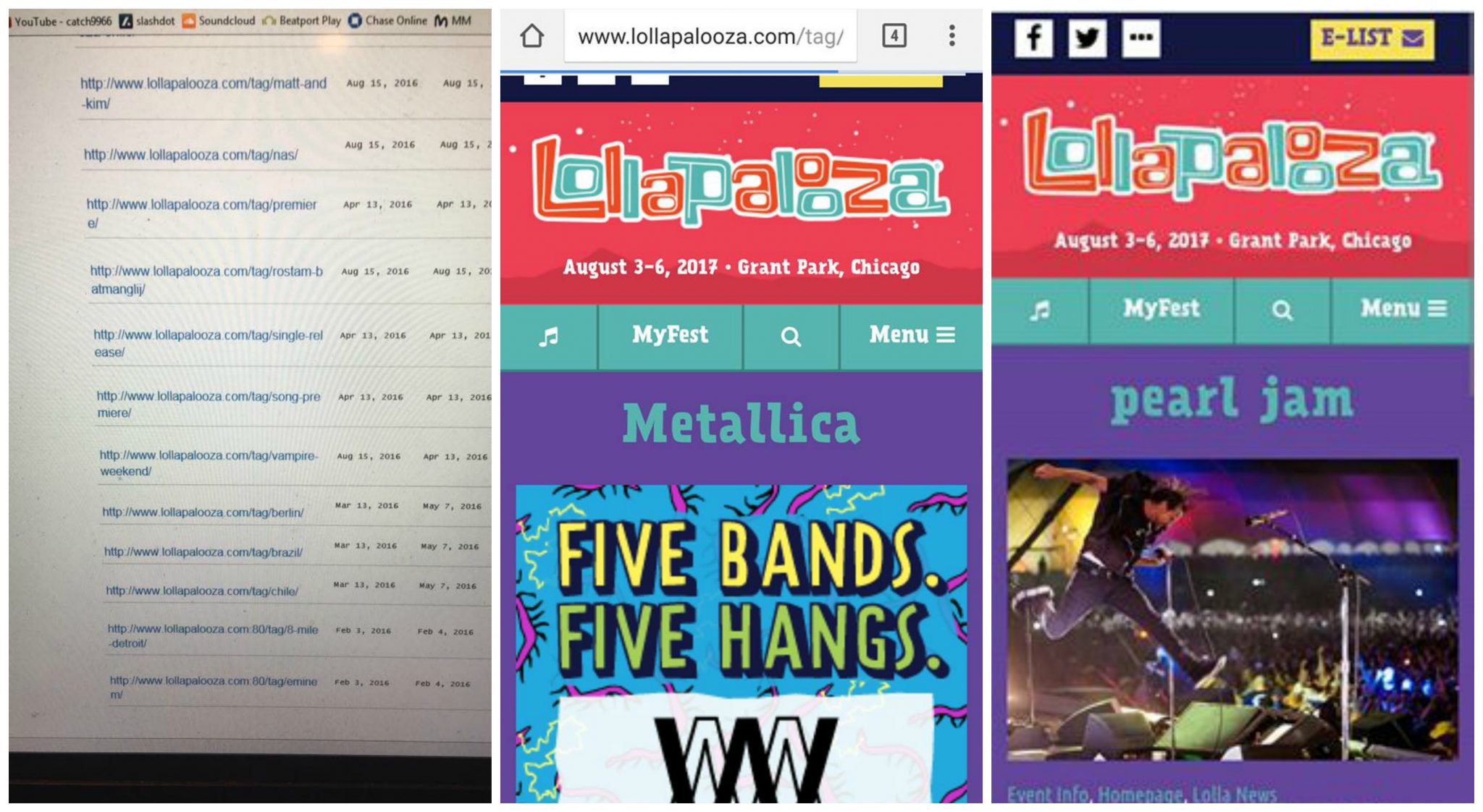 A simple review of Lollapalooza’s site, however, revealed what could well be an explanation for all this raucous. Up until earlier today anyone could add past artists’ names to the end of a simple URL “http://www.lollapalooza.com/tag” to produce what appeared to be an artist database of acts that have played the festival before. This was the case for Pearl Jam, Metallica and other acts including Nirvana, a band that is definitely not going to be playing at Lollapalooza any time soon. A review of Lolla’s site revealed that tags were created for a lot of past artists such as Eminem, Nas, Vampire Weekend, Matt and Kim, Dresden Dolls, etc. At time of writing most of the above information was made newly unavailable on Lolla’s site, but the above screenshots live to tell a tale. The need for such a database is obvious for both SEO and marketing purposes, especially considering the fact that Lolla uses WordPress to host their site.

Think about this for a second: all a festival would need to do to receive free publicity from the majority of the world’s dance music blogs right now is get their web developer to add a simple “Daft Punk” page with relevant link on their website. Even innocently building an artist data base could lead to the same result.

Will Daft Punk tour in 2017? Maybe and maybe not. What I can say for sure is that the evidence being used to claim they might be touring is not evidence at all.