What Your Emojis Say About The Music You Listen To 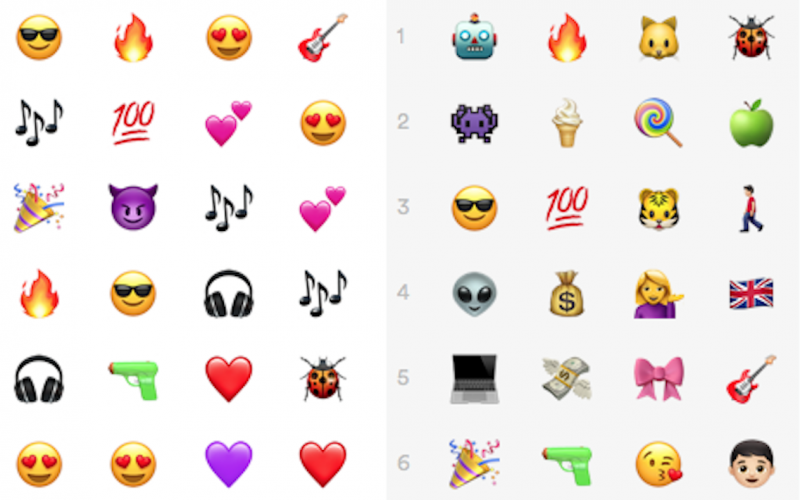 What Your Emojis Say About The Music You Listen To

It may come as a surprise perhaps, but were you aware that there are over 35 million Spotify playlists with an emoji in their title? What artists has the most emojis associated to his name? And which emojis are they?

The beauty of emoji is that they transcend so-called regular languages, eliminating the barriers that often prevent us from communicating easily and freely with people from anywhere in the world. Those cute, simple images convey thought via chat and social media by representing elements of a universally accepted language that can be used by people anywhere in the world to describe how they feel and what they are doing in ways that would otherwise be impossible to communicate.

Out of over two billion user-generated Spotify playlists, over 35 million have an emoji in their title. A project was conducted to look at the relationship between those emojis used in playlist titles and the music they represent. The results can be seen via three interactive data visualizations made with Tableau Public.

Click HERE or on the picture above for an interactive version where you choose the artist.

“The “Describe Artists” data visualization above reveals the 10 emoji most distinctively associated with the 5,000 “most emoji-ed” artists on Spotify — that is, the emoji used to refer to each of these artists at a disproportionate rate. This explains how listeners feel about each artist, in the language of emoji. The most emoji-ed artists are at the top of the chart.

Click or tap any emoji to hear the song most distinctively associated with it, by that artist, and see a ranked list of artists most associated with that emoji, to the right. You can explore further by using the dropdown menus to pick a specific artist, genre, or emoji, and compare as many as 50 artists at once.”

As can be seen in the screen shot below, Daft Punk’s most distinctive emoji is the robot, fittingly reminiscent of the band’s iconic helmets and electronic sound. The robot was to be expected, perhaps, but people also think of Daft Punk as party and running, in particular on the strength of overall party favorite “Get Lucky,” but also “Harder Better Faster Stronger.” 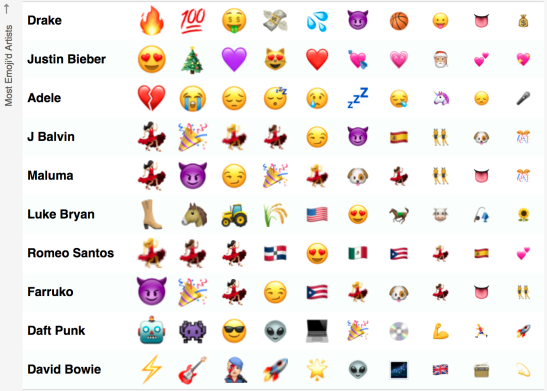 David Bowie’s most representative emoji is

, reflecting his look on the cover of 1973’s iconic album, Aladdin Sane, pictured to the right. He also gets space-related emoji such as the rocket ship, galaxy, and star emoji, probably due to space associations like his Ziggy Stardust (alien rockstar) and Major Tom (astronaut) characters.

maybe due to heart-wrenching love songs such as “Make You Feel My Love” and “Hello.” 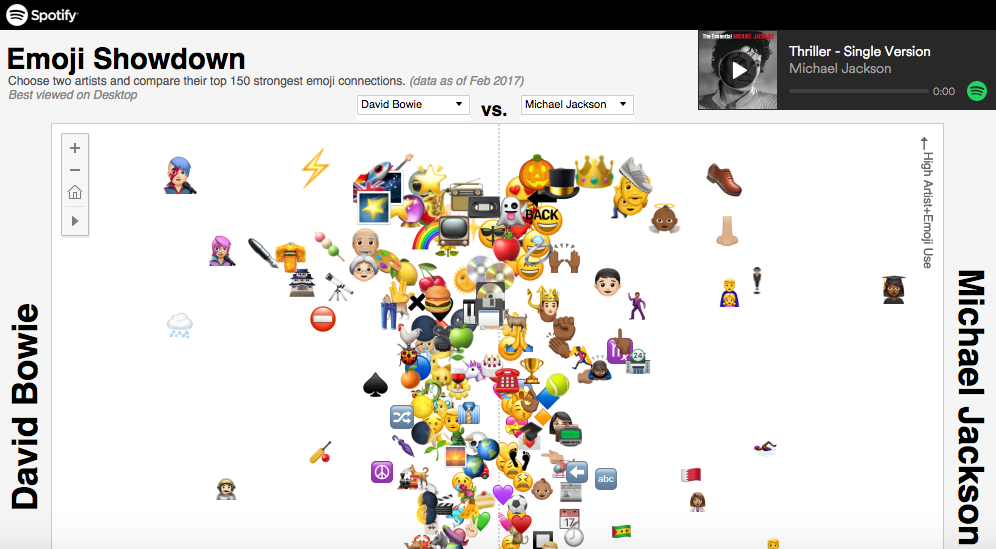 Who is the more

artist, Lady Gaga or Madonna? Let’s find out. “Emoji Showdown” lets you discover how people feel, emoji-wise, about nearly 200 included artists. Pit their distinctive emoji against each other to understand how they differ musically, and in how fans perceive them.

The emoji towards the top of the graph are most frequently associated with the artist. The horizontal axis shows how distinctive each emoji is to one artist vs. the other, with emoji trending hardest one way or the other appearing towards the left and right edges.

Kygo is associated with tropical house music, which is why you see the palm tree, sunset, boat, sunshine, and his home country’s Norwegian flag. On the right side of the chart below, Calvin gets lots of emoji from the workout and party crowd. He takes partying, muscle, weightlifting and running, due to how his music sounds compared to that of Calvin Harris.

Click the above image or HERE for an interactive version where you choose the artist.

Everything you’ve seen so far is built on the concept of distinctiveness, not popularity. Lists based on popularity tends yield little variation, and we believe that it is more meaningful, in this case, to identify and visualize the unique emotional connection between artists and fans. The most popular emoji are interesting, but the distinctive ones really get at the emoji that uniquely define an artist. 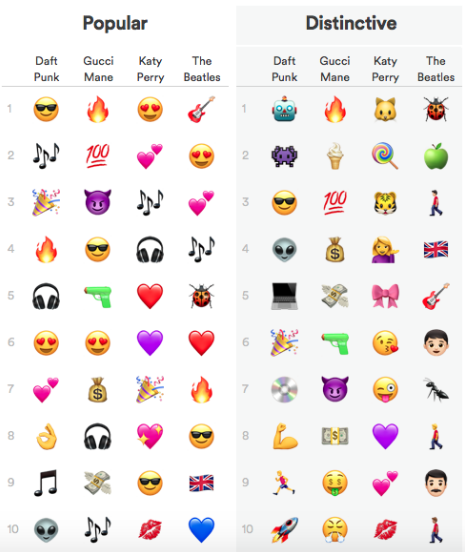 Here’s exactly how we calculated the distinctive emoji for each artist. For each association between emoji and artist, we measured whether it is expected or unusual using pointwise mutual information (PMI). Given a pair of outcomes (e.g. ???? and Gucci Mane), PMI takes the observed frequency in which they occur together and compares it to the expected probability of their combined occurrence if they were completely independent. In this example, ???? occurs a lot on its own, but it appears way more on playlists including Gucci. So “????+Gucci Mane” ends up with a high PMI score.

On its own, PMI tends to overstate the importance of pairs with very unusual items. This means that rarely-used emoji can end up with high scores, but it’s essentially just noise in the data. To compensate for this, we multiply each pair’s PMI score by the square root of its total number of appearances. So the top scoring emoji for each artist are those that are both distinctive relative to other artists and popular among listeners of that artist.