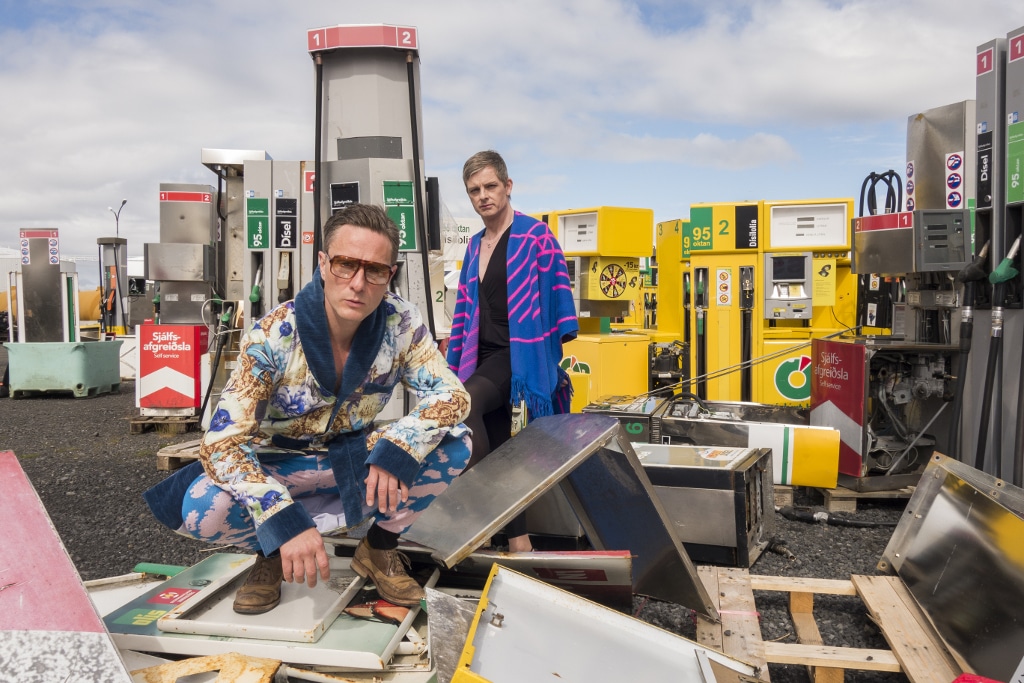 Genre-defying electronic duo Gusgus recently released their Remixes Are More Flexible EP. The Icelandic duo have had a long, rich musical career and show no signs of slowing down. Over the course of more than 20 years, they have released nine albums, 30 singles and two compilations. Their world-renowned live sets continue to captivate audiences. On stage, the electronic duo Gusgus extends their tracks and warp their soundscapes in a way that is unique to each performance.

As Gusgus gets ready to welcome a new decade of sound, Biggi Veira  (one half of Gusgus) shares how they’ve maintained a creative, original approach to their music throughout the years.

So, is it true, are remixes more flexible (creatively)?

Biggi Veira: In a way, perhaps. When I’m putting together remixes, I have a much more relaxed approach whereas Gusgus tracks are often stuffed with concept and meaning and have to fit with other tracks on a full album that we can brand as “the next Gusgus album.” I also release[d] B-Sides as a way to share sounds and groovy ideas that don’t necessarily fit in with the concept o[f] “the next Gusgus album.”

Is this two-part project something you’ve been meaning to do or was it more of a recent thought turned reality?

Biggi Veira: It was planned. I am very much an old-style, album-oriented music consumer so I prefer to digest full albums instead of playlists of various unrelated tracks. For us, it felt more natural to wrap our remix packages into what could be referred to as “an album.” So both parts of Remixes Are More Flexible have one reworked instrumental track from our last album Lies Are More Flexible, one new B-Side track, and four remixes. All arranged in a way that creates one coherent listening experience.

How did you decide on which songs would receive a mix and why include two original tracks on the EP?

Biggi Veira: We had a vocal that Sisely [Treasure] layered over the instrumental track “Lies Are More Flexible” for over a year. We also felt the strong urge to create a vocal for the instrumental track “No Manual” from the original album. I have also taken up an interest in producing instrumental tracks that complement my DJ sets since I’m doing those much more often. I used the concept of B-Sides to do just that. You can then imagine those B-Sides accompanying the reworked vocal tracks on a vinyl 7” in your personal jukebox!

Rather than mimicking, try to be inspired by other music. Always create your favorite music, not what you think others will like. – Biggie, one of half of electronic duo Gusgus

You’re pioneers in the electronic scene and serve as inspiration for the community. You’ve been creating for more than 25 years, what or who inspires your music today?

Biggi Veira: What most inspires me to create music is random, scattered sounds so our tracks usually start with a kind of sound creation. The sound created usually leads me to how it wants to be used. Another inspirational input is what kind of musical state I’m in at the time and the kind of stuff I’m inspired by at the moment. Normally, that is a mix of random new stuff that I’ve found recently and older stuff that is deliberately selected. To answer your question, three things inspire us: sounds, new music, and old music.

To find new music, I usually tap into what’s going on in the club scene and scout tracks that were created with more enthusiasm than with the intention of just being a DJ tool. Currently, I have artists like Raxon, Adriatique, Termoment and Nox Wahn on my radar. I’m also obsessed with post-punk era music from 1978 to 1982 and rock-oriented electronic music now than when I last scoured this era for a concept. We began working with these strange arpeggios influenced by bizarre cord structures from this past era while working on our last album Lies Are More Flexible. In mid-2017, we had the idea to split up the tracks into two groups: one with “Italodisco” flare, and one with “aggressive rock” as the primary influence. We are currently working on finishing the “rock-influenced” records, along with strange stuff that has been floating in my studio.

The EP features remixes from Metrika, CPI, Henry Cullen, and David Alvarado, as well as a brand new single from the electronic duo Gusgus, and a vocal rework of the original LP’s titular track.

Genre-bending is a phrase that could easily define your style. Not afraid to play light, more mellow synth-pop bops or driving deep techno sounds or leaning into your electro side–you really do play it all. Was this a conscious decision or something that just naturally played out (no pun intended).

Biggi Veira: I think it’s something that comes very natural to us. I’ve been consuming electronic music since 1982 and for me it was always pop or just music that had no relation to the club or genres. Of course, this included HiNRG Disco, Italo Disco, NY Electro, Synth Wave, New Romantic, Industrial Electronic and whatever more. But I was not interested in genres, I just loved all of these strange, crazy sounds and beats. I was also a huge Depeche Mode and Soft Cell fan so the combination of strange electronic music with vocals was normal to me. Throughout the years when new styles emerge that inspired me, they compounded upon the pile with all other influences already present. When I create and work music there is actually no special plan, I just let the sounds and my equipment lead me into whatever direction they wish.

Creativity can really be found everywhere, and technology has made it easier for aspiring producers to make music. What’s a piece of advice you’d give to these younger (age/experience) producers?

Rather than mimicking, try to be inspired by other music. Always create your favorite music, not what you think others will like, and slowly find your identity in sounds, grooves and feelings.

Often, producers try packing in a lot in a track when sometimes less is indeed more. Are there any characteristics for making a good dance track–regardless of genre–that are indispensable for you?

Biggi Veira: For me a good dance track has some kind of an identity. Something that makes it different from the rest. It also has to have something in the groove that makes your body start to move without you knowing, and even if it doesn’t want to. Then add some goosebumps into the mix and it’s done.

Today we’re more connected than ever. Social media has become a huge component of how music is shared. How much emphasis do you place on social media and how active are you in the space?

Biggi Veira: We try to be active, but this is really not my thing because I’m from different times! I follow politics and that’s it…

Moving from online to the real world, any plans to hit U.S. venues or festivals in 2020?

Biggi Veira: Yes. They will likely be synced with the release of our next album, and our 25th year anniversary next year.

Looking back in 2019, any standout moment that comes to mind whether it’s a show you played, fan/artist interaction, etc.

Biggi Veira: Yes. When we played live one of our new unreleased tracks “Simple Tuesday” for the first time in Hungary and realizing that it would be a hit. Then again when a female artist I love sent me vocal over one of my new favorite instrumental demos…it’s a bomb, but more on this next year :)

Biggi Veira: Get ready for the best Gusgus album to date coming in 2020, but be prepared for some new Gusgus experiments with electronic, urban rock.