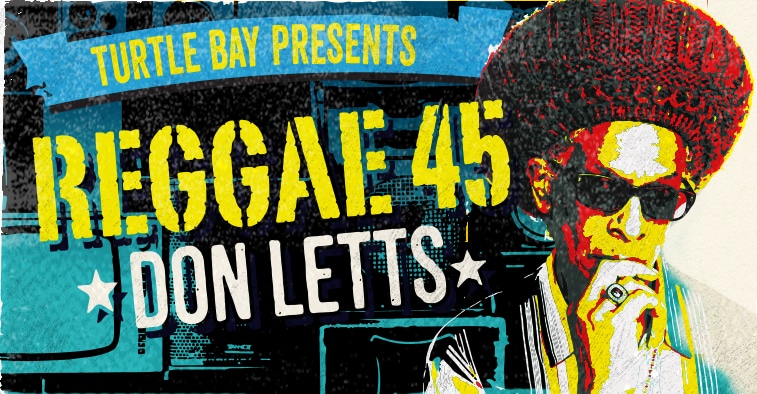 After The Sunday Times recently placed Reggae 45 in it’s “Top 50 Podcasts of 2017”, Turtle Bay and Don Letts are ready to unleash their latest podcast edition. The cultural icon and all-round musical magician teamed up with the Caribbean restaurant and bar franchise last year to produce an initial run of 4 podcasts. However, with popular demand and what would be Bob Marley’s 73rd birthday looming, the pair have cooked up an irresistible recipe to kickstart Reggae 45 and it’s 2018 campaign:

The last four podcasts included 4 different topics within the field of reggae as Don took his listeners through a journey of music, chat and discussion, delving deep within multiple areas of the genre – Sound System, Singers and Performers, Dub Version Excursion and DJs, MCs and Toasters. Next up, Don is focusing on Bob Marley, who on the 6th February would have celebrated his 73rd birthday. Needing little introduction, Marley is arguably the frontrunner in reggae, ska and rocksteady, as his unique blend of song-writing and composition lifted the music to mainstream recognition. An icon to many, the idea of this Reggae 45 podcast is to celebrate his life, his work and his contribution to music and culture.

Chris Salewicz is a journalist and broadcaster who has written for everyone from Q Magazine to Mojo. He is the author of 17 books and was also formerly a Senior Features Writer for NME Magazine between 1975-1981, which resulted in him building a unique friendship with Bob Marley – in fact, his relationship with Marley lead to the writing of the book – Bob Marley (The Untold Story), which gives insights into the man himself, a story way beyond the music. Chris and Don have also worked together on several projects, in fact they moved to Jamaica for two years to develop film ideas.

This Reggae 45 special promises to be an exceptional insight into the lives of three cultural icons, especially one in particular. Don and Chris will take a nostalgic trip back to their time spent with Bob, as well discuss the life of a legend.

On the podcast, Chris Salewicz added:

“Don Letts and I have an extremely long history of working together that is only exceeded by the length of time since we each first encountered Bob Marley, whose work came to bestride this planet with resounding resonance. To come together on a project about Bob is an absolute honour and a blessing: it’s really exciting to be involved in this podcast about the man who was one of the very greatest artists of the twentieth century. So, give serious thanks to Turtle Bay for making this happen.”

Grammy award winning, Punk documentary Director, BBC 6Music presenter, Glastonbury artist and all-round cultural mastermind Don Letts has worked with everyone from The Clash to Richard Branson. Like Chris Salewicz he’s been involved in popular culture since the 70s; from the Punk movement, to documentary making, reggae music and radio shows. He’s been part of the hub pushing boundaries for decades, making him an oracle on how music, love, food and culture can influence generations. It puts him in a unique place to offer gems of experience on how all of this has brought him to the projects he’s working on now. It was as a DJ at the first punk club ‘The Roxy‘ in 1977, that he made his first film ‘The Punk Rock Movie’ with The Sex Pistols, The Clash and many others. Since then Don has won countless awards, performed on all corners of the globe and is now one of the most respected names in music history. After the success of the first 4 Reggae 45 podcasts, Don is ready to reignite the flame once again:

“Looking forward to my forthcoming Reggae 45 session with respected journalist, broadcaster, author and good friend Chris Salewicz when we’ll be discussing his time with Bob Marley and his book ‘The Untold Story’ on what would have been the Tuff Gong’s 73rd birthday.”

You can listen to Reggae 45 – a Bob Marley Birthday Special via iTunes here!