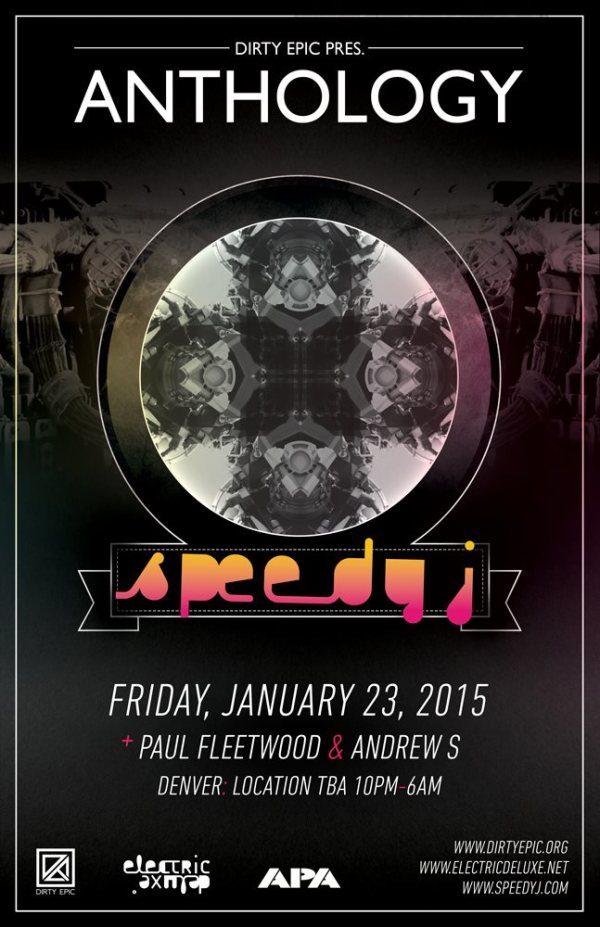 Los Angeles based crew, Dirty Epic, had quite a strong finish to 2014 hosting underground events with the likes of Len Faki and Recondite. When it comes to delivering techno in it’s truest form, Dirty Epic consistently provides the West Coast with incredible talent that leads to unforgettable nights. This week they prepare to host Dutch techno legend, Speedy J, except this time they’re taking their vision to Denver, Colorado. A highly anticipated event for the Mile High City that is sure to be a memorable way to get things going here in the beginning of 2015.

Speedy J needs very little introduction. From his early beginnings he has been a dedicated member of the industry and has helped shaped the international scene along with other pioneers such as Richie Hawtin, Laurent Garnier, and Chris Liebing. When Detroit and areas of Europe began sharing music, Speedy J was at the forefront of this soon to be musical sensation and was responsible for influential releases on labels like Plus 8, CLR, Rekids, and is now the chief visionary behind Electric Deluxe Records.

His style is eclectic, and you’re just as likely to hear the harder modular techno as you are deep ambient atmospheres when he plays a marathon set. A perfect example of this can be heard in his seven hour set at Trouw in 2013. Setting the tone with about an hour of techno ambiance, the night then took a turn venturing into deep techno textures that had the crowd locked in for the long haul. You can expect similar results in Denver this Friday as he is sure to put on a spectacular performance in the Mile High city.

Denver is an underrated city for electronic music in North America. At times it seems that New York, Miami, Chicago, and Los Angeles cast a shadow on other city’s that have strong developing scenes, but that doesn’t mean they don’t exist! Denver is home to the famous Beta Nightclub which hosts incredible international talent on a weekly basis, and the music lovers in the city are eager for more. When the audience becomes receptive to the music, this opens up many avenues of opportunity for the scene to grow.

Dirty Epic is extending their vision into Denver, and doing it in grand fashion with Speedy J. With a developing nightlife scene centered on dance music, you can be sure events such as Anthology with Speedy J will be a major catalyst to future events in Denver. Speedy J, without argument, is one of the most esteemed legends in the game, and Denver is in for a special treat this Friday. Accompanying him will be Paul Fleetwood, and Dirty Epic’s own Andrew S. We wish all the best to the Dirty Epic team, and can’t wait to hear how the night turns out.