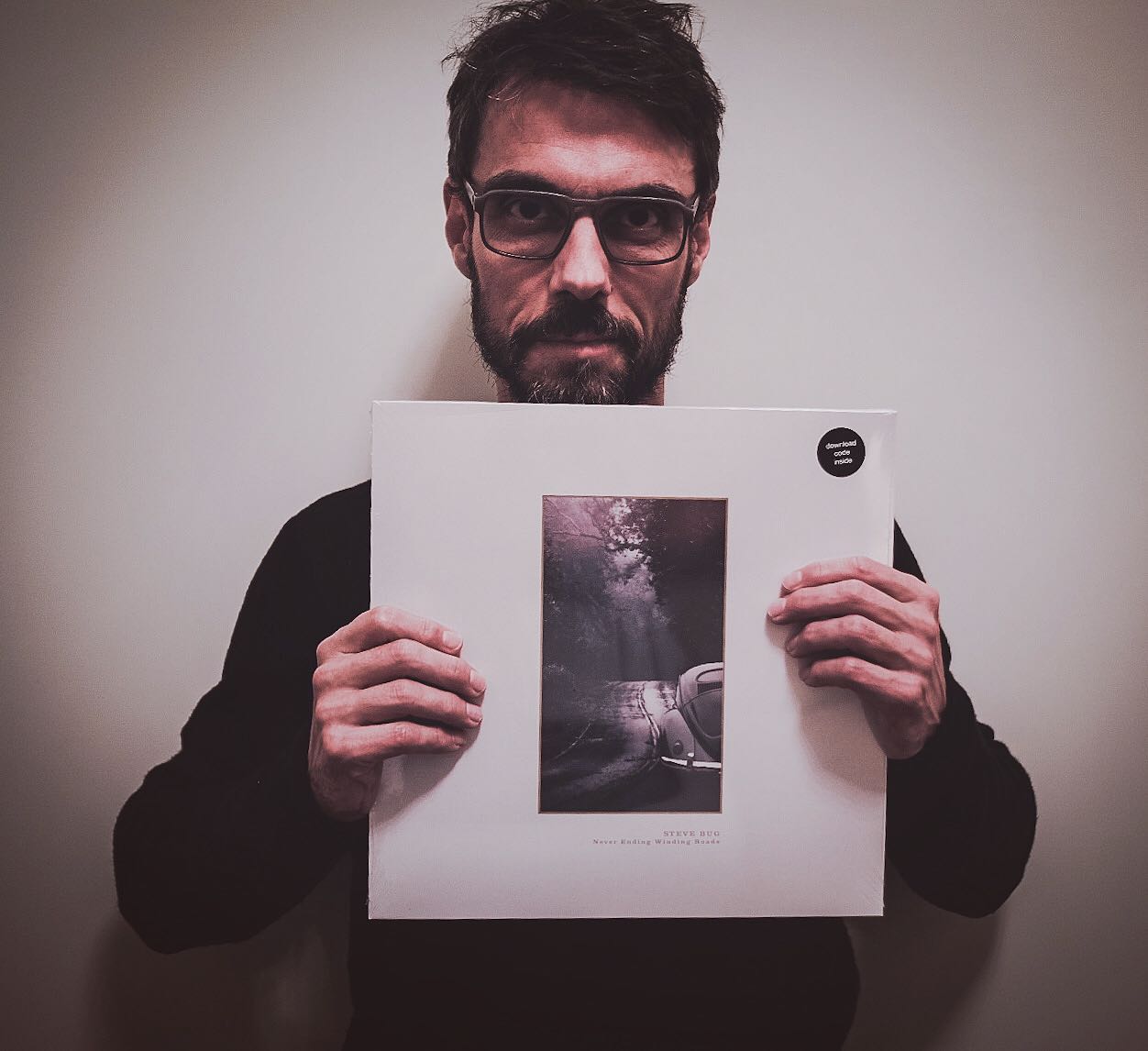 For Steve Bug, traveling on never ending winding roads means that it’s the journey itself that is the focus. Acclaimed producer, DJ, label owner and musical pioneer Steve Bug’s influence on the musical landscape is, at this stage in his career, well documented. With roots in Germany’s legendary club scene and fans around the world thanks to his enviable catalogue of releases, the influence of his label Poker Flat Recordings, and his famously exemplary DJ sets, Steve is a singular artist with a lucid and passionate approach to his craft.

His previous LP Paradise Sold alongside Langenberg was released in 2018 to critical acclaim. Released earlier this month, his new album Never Ending Winding Roads on Poker Flat is an entirely solo release however, with much of it produced during the months of enforced isolation due to the coronavirus pandemic. Many of the track titles reflect Steve’s headspace during this time, with themes of solitude, contemplation and reflection brought to the fore perhaps more than with any of his previous work.

Here, we caught up with Steve to discuss his mindset when producing the album, and why the endless touring schedule of successful DJs might not be that helpful when it comes to creating music.

Thanks for talking to us Steve. Congrats on the new album! How that it’s out and it’s no longer just your own personal project, how do you feel?

Thanks, it feels great. There is this one point, where everything is finished, the tracks are mastered, the artwork is done, and you already gave the green light for the release. From that point on, you can start to focus on other projects. On release date, you already got first feedbacks from some artists, friends, and journalists, but it’s the moment when it’s finally available to a wider audience. I have to say that this time, I’m overwhelmed by the amount of positive feedback I’m getting. Sharing the music you worked on for weeks/months with the world is one thing, knowing that people appreciate your work is another.

You’ve said your mindset was completely different when making this album, due to lack of touring. Do you think there’s something about the relentless touring schedule of most successful DJs that can actually limit creativity?

Most definitely, first of all there is so little time to write music, when you’re touring all year, but I think what’s also important for creativity is time off, time to reflect on things, not being bombarded with new experiences/influences every day. We’ve seen the lack of output from many great producers who have been constantly touring over the past years. But touring is not the only problem, the financial aspect of releasing music plays almost no role anymore. Thinking back 15 years, an artist who also ran a label would make around a third of his income by producing music, a third by running the label, and a third by touring, nowadays it’s almost a 100% by touring, and the rest is seen as a business card to promote yourself and get gigs.

And what’s even sadder, is that nowadays most promoters and consumers don’t even care about the fact that you just released a great record, or that you constantly release music that is played in the clubs. Many artist have understood this. So instead of spending time in the studio, they decided to spend that time on other sorts of self promotion/marketing and it pays off. The influence of social media on promoters and party goers is out of control. And for artists who don’t want to tour and rather spend time on writing music, there is no way to make a living anymore. Artists are forced to tour, and to do so, they have to build a reputation, and it’s very difficult to build this just on music unfortunately.

But back to my mindset when writing this album, it did definitely help to have all this extra time at hand and stay in the zone for weeks. I think its what makes this album special, at least for me.

Conversely, are these album tracks records you can see yourself playing out at clubs once they’re open again?

Sure, why not, they are all danceable somehow, it would be great to play them out. Hopefully it will be safe and okay to do so rather sooner than later.

Do you have any personal favorite tracks on the album?

Not really, I like all of them for different reasons. And I really like listening to the whole thing instead of just single tracks. To me it’s one piece.

As someone who’s used to performing in front of crowds every week of their lives, how has it felt to have that taken away? Have you felt a lack of connection?

Oh yes, it feels terrible. Like someone put your whole life on hold. In the beginning it was an almost welcome break to reflect on things and write music, but then I really started to miss playing in front of crowds. Something is missing. I’ve ben touring pretty hard for more than 20 years, it became a part of my life. I was constantly on the move, I barely spent more than 4 days in the same place, meeting new people all the time, playing music in so many great clubs, for so many amazing people. I miss it so much, even though it was very stressful sometimes.

It would be great to reconnect with everyone, being able to perform in front of people, and share the dance floor again.

You’ve always been a strong advocate for ignoring trends and doing something authentic to your own tastes. Has that been a difficult philosophy to maintain over the last 20 or so years?

I can’t do it differently, this is how I tick. Lately I draw an analogy between movies and music, and I say I’d rather be an arthouse movie than a blockbuster. It may not be the wisest decision financially, but it’s who I am. And luckily more and more people seem to appreciate that.

We read that bouldering is a big passion of yours -what first got you into it, and what do you get out of it that’s different from other forms of exercise?

I love doing sports in general, and I am very interested in trying out new things, so climbing was on the agenda already, but I didn’t want to start something else where I had to rely on others, since it’s rather difficult to match spare time. Then I saw a video of a friend of mine, she was climbing without a rope, and I was like wow. So I sent her a message to see what it was. She said it’s bouldering, it was before it got rather popular, so i haven’t heard of it before, but I wanted to try it out. I called two friends if they wanted to join me, and the next week we went. I immediately fell in love with the sport and came back twice a week. Soon I noticed that I make faster/bigger progress when I go 3 times a week instead of just 2. So I quickly improved my skills, and made contact to other climbers. Not only that the community is great, but bouldering itself has so many benefits. I haven’t done any other sports where all your problems are left at the door outside the gym, or the forrest when bouldering outdoors. You focus 100% on what you’re doing, you’re mentally and physically engaged. And you learn to move/place your body better with every session. It’s a full body workout and gets you in great shape. It also may help to overcome fear, build self confidence etc. I said this before, but I can only recommend to try it out. Or wait, better don’t gyms are overcrowded already.

Bouldering or DJing – and you can only keep one. Which do you choose??

Deejaying while bouldering, or bouldering while deejaying. Haha. No but seriously it’s like saying: “you have two kids, Carl and Amy, you are only allowed to keep one.” Impossible to answer.

We saw on Twitter that you said you’d hit a bit of a creative low. Is that common for you? And what do you do – if anything – to get yourself out of those mindsets?

It’s common thing for all artists around the world. No one is on a continuous high, that’s another reason why writing music with a lack of time is difficult. I’ve been through many lows, usually turning the gear off, and not turning it back on until I really want to does help. There are a lot of things I like to do to get over these lows, but I never know what will work, and especially not when it will be over. But going for walks, reading a book, watching a movie/series, going for a bouldering session, meeting friends etc, or even taking a longer break going on a longer trip to the mountains to hike or ski, or similar may help. When I was still touring, having a fantastic weekend could also break through that wall. It really depends, but it’s always good to know that it will be over one day. The one you mentioned is already over, and I feel the creative juices floating again

Following the release of the album, do you feel the need to immediately start working on the next project?

In times like this I do, what else can I do? I finally have all the time in the world to write music, wha not use it – when the creativity allows it.

Finally, as someone who’s nurtured your fair share of talent with the various labels you have run, who’s one artist we should all be keeping an eye on?

I personally think that there is so much talent out there it would be unfair to just name one or two. I always ask people to dig under the surface to find something they personally like, instead of alway being influenced by someone else, or even worse by an algorithm.