6AM Guest Mix & Digging Deeper with Rex The Dog 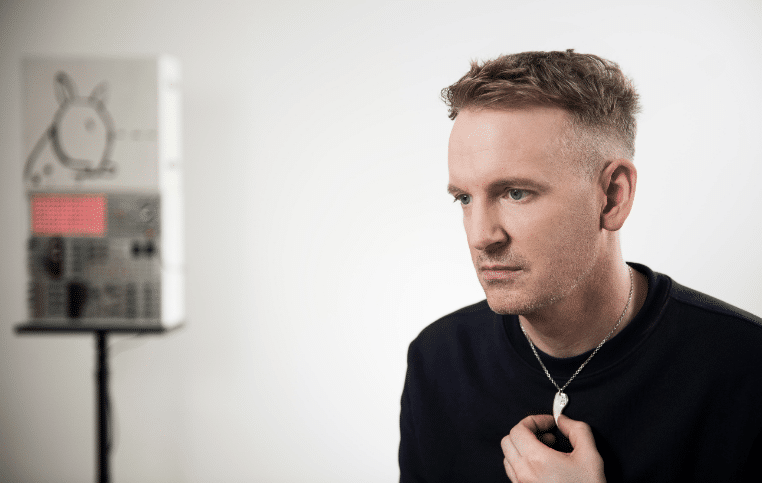 6AM Guest Mix & Digging Deeper with Rex The Dog

Kompakt producer and live act Rex The Dog has been around for decades and is coming over to our side of the world for gigs in Guadalajara and Queretaro, Mexico this weekend and then at The North Door in Austin on February 1st and then at San Francisco’s Phonobar on February 2nd.

Rex The Dog makes and performs music with analogue electronics and a self-built Modular Synthesizer, carrying his machinery around the world for his gigs, bringing his idiosyncratic sounds to packed crowds at the best clubs, festivals and parties.

With a busy touring schedule and four North American gigs looming, we thought it fitting to ask Rex The Dog to send us a mix from the road, as well as to sit down for a chat with us about his relationship with the American scene and his artistic passions beyond electronic music.

Hi Jake, thank you for the mix – it’s an honor to have you on board for this one! Where did you put it together?

Hey thanks, I actually put it together on 4 different trains on my way to a show in Breda in the Netherlands, and then on my way home the next day.

Can you walk us through it a little bit? Any particular tracks on there we should keep our ear open for?

Well, the opening track is ‘Patchwork’ by Laurie Spiegel. It’s an interesting 1980s artefact because it was put together using computer algorithms to play analogue synths rather than playing or programming. In 1980 this was pretty fresh. I love the actual sound of it even more than the concept. It has a great evolving melodic structure which is not something you can say about a lot of algorithm-based compositions. I’m sure there was Laurie Spiegel’s guiding human hand in there somewhere!

After this quite long (but amazing) opener, we get straight onto the dance floor for an hour, starting a little groovy and then getting heavy with the sequencers towards the end. I like a stripped analogue sound so that’s where I’ve steered us.

Your love affair with Kompakt is a widely known one. When did your relationship with the label begin and why do you think it has nurtured and flourished for so many years?

I first came across Kompakt back in 2003 when I was buying records in Soho. I told the girl in the shop that I liked Moroder bass lines and she picked out a big selection of records for me. About five of them were from Kompakt, and I think I fell in love that day.

When I made Prototype a few weeks later I sent a CDR to Michael Mayer, not really expecting a reply, but one day I got an email saying ‘we would like to reserve this’. I still feel emotional about that moment! Michael and the other members of the Kompakt family have always been really supportive and encouraging and I think it’s their love of the music and the scene above all else that keeps them strong.

When you’re in the studio producing do you feel your output is at all influenced by Kompakt’s sound or do you feel like you’re still just as free as always to go in whatever directions your creative juices take you in the moment?

No I don’t think about a ‘Kompakt sound’ at all to be honest and I think that’s healthy. I try not to even think of a sound. But that’s less under my control.

You’ve built your own modular synthesizer, which you’re pretty proud of. How did that come about, was it a shortage on the market for what you needed as RTD to produce and play the music that flows through your veins?

I’ve built parts of my modular synth, not the whole thing. I went on an electronics course with a friend because we wanted to learn to solder and how to fix things. We built some modules from kits, and then after a while I decided to make some things that were just for me, to work with my ideas for my live show really.

I mentioned creative juices and remembered that your artistry goes beyond music and touches other areas, such as illustrations for example. Have you always been interested in art from a young age?

Yes, I actually studied illustration at art school. The name “Rex The Dog” comes from a project we were all given to design a dog food identity. We were given a short story about a dog called Rex and told to work from that starting point. Later when I needed a name, I just took it.

What other skills do you have that we don’t know about?

Ummm, not many I can think of. I can make a good Toad In The Hole. Does anyone in the USA know what that is? It’s sausages and batter and it’s the best thing ever…

Gotta admit I had no clue what it was! You’re hopping over the pond for some shows in the States soon. What’s your relationship been with this country over the years?

I love it. My first time was in 1988 with my family, I was 14. We went to New York City back when some parts were a bit dangerous but we didn’t know and my brother got mugged. It was not a very serious mugging really, more of a minor shakedown.

I made my family take me to ‘Apple Jacks’ restaurant which is where Neil Tennant from Pet Shop Boys first met Bobby O. They took me there, but I wouldn’t tell them why I wanted to go!

What do you look forward to doing the most when you come over?

Do you see yourself playing more American cities in the years to come?

I would love to. I’m coming more and more and I hope that’s what happens.

Is there an area of this country you haven’t visited yet which you’d like to see one day?

I’d really like to see the Rockies. Oh and I’d like to go to Hawaii too please!

Do you own a dog?

Sadly no, although I made Michael Mayer believe that I did, for 15 years. And he nearly disowned me when I finally told him.

Your career has now spanned several decades. What else is there to do on your bucket list as Rex The Dog?

It’s more places I’d like to play. I’d love to play in New Zealand and there are some clubs around the world I really would love to play, but I don’t want to jinx it by naming them. And I’m planning to DJ again, because currently I only play live so I’m working on my DJ skills at the moment.

Lastly, what are you looking forward to the most in 2019?