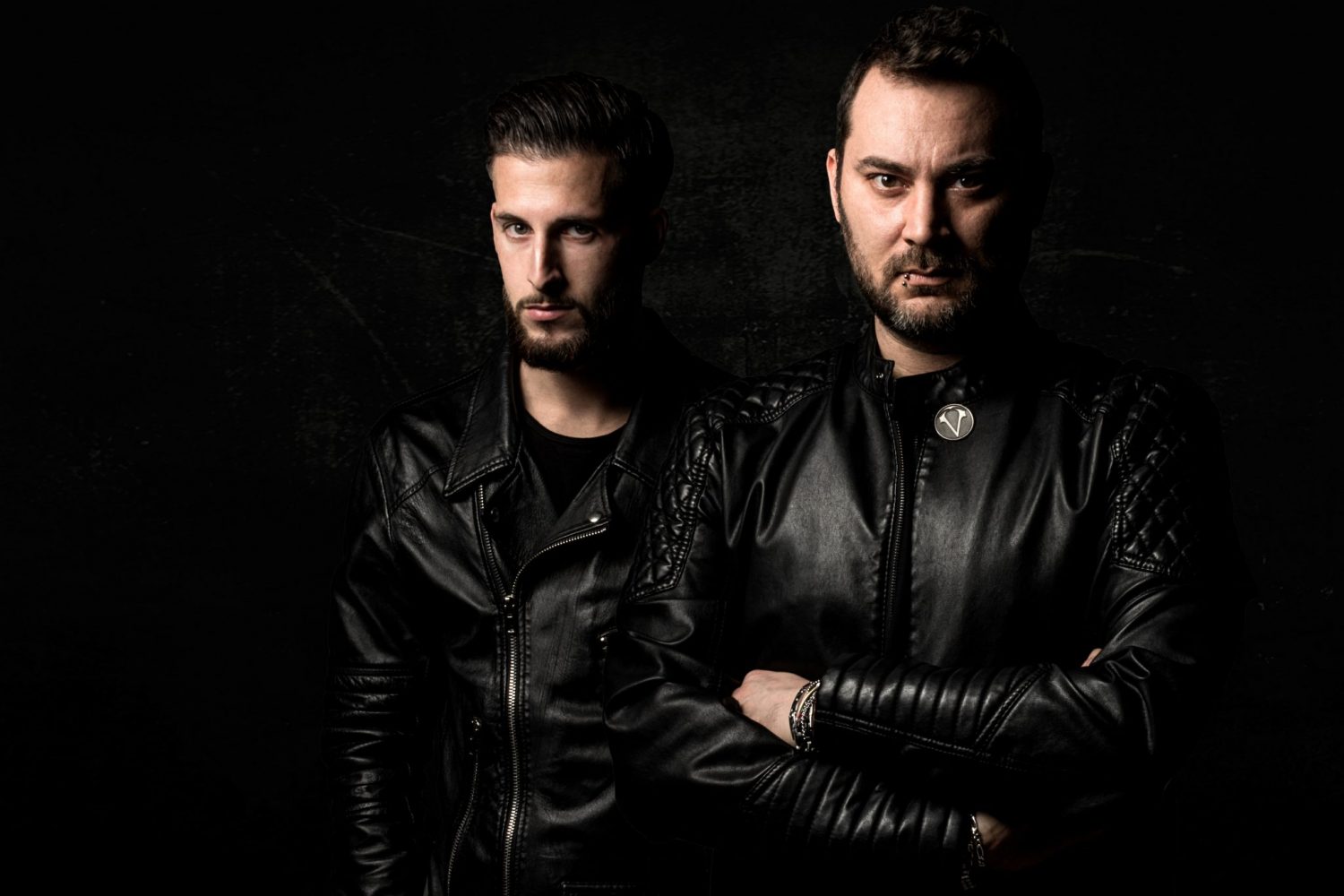 Italian producers POLS (aka Paolo Armellin and Vincent Vega) started producing together in 2015 and have since been making some of the most exciting techy rumbles out of Italy.

6AM digs deeper as they drop their hot new release ‘Arcanite’ on Frequenza.

Hi guys, it’s a pleasure to chat with you today, how are you?

Hi to you! Everything is great thanks, we hope the same for you, we are really grateful for the opportunity to be chat with you.

Please tell us a little about yourselves, where you’re from and how you started making music?

We are both from Conegliano ear Venice in Italy and fortunate to live in this beautiful country. Our city is famous for its Prosecco in the region. When we were young, we were given two choices – either start doing something interesting or start drinking every day!

Fortunately both of us fell in love with music. POLS actually began in 2014, but we both have both played and made music since childhood – Vincent has played the drums since he was 12 and Paolo started djing at 15. We were also friends long before having any thoughts about starting music group and would often perform at the same venues with different projects and had no idea that we’d eventually end up working together in the future.

What’s the story behind your name POLS?

So the story goes Vincent was given the nickname POL from his friends when he was young and Paolo Is PAOLO, so POL + PAOLO = POLS. Easy. Like math right?

And what specifically got you into making music together, have you experimented with other genres at all?

Prior to starting POLS, Paolo cut his teeth working as a DJ, passionately spinning Techno and House music all over the Veneto area.

As a drummer, Vincent started by playing rock and roll and funk music. He also found to early success as a producer for other projects in the electro scene and had the opportunity to release music on some bigger dance labels and received support from lot of big artists.

Vincent: for me Pink Floyd with no doubt.

Paolo: It’s a hard question for me, because I cross all genres, but I love especially: AC/DC, Elvis Presley and 2pac.
You are probably laughing a lot in learning no one from the electronic music scene, but we grew both up both with Rock and Roll.

What’s most important for you, DJing or producing?

Both aspects are important to us, but we feel our strength is in our ability to share both jobs: Vincent is more of the producer behind POLS, while Paolo is the one who is focused on everything else that is needed for the POLS brand such as curating track lists for our shows and focusing on developing POLS brand. We find that it is an easier way to work together, however this, of course, does not mean that Vincent is not a DJ and Paolo is not a producer, but we have learned over time that is better if each one is focused on different side of project to achieve better results, and helping each other when it’s needed.

And when making a track, who does what in the studio and are 2 heads better than one?

Vincent is the one that literally lives in the studio, so he is generally the one who begins all of our many of our songs. It is Paolo’s ears that have the final say, and he will usually add input, maybe making changes to a bassline or flipping up a rhythm. Stuff like this. So yes usually two heads are better than one, but not in every case, it takes chemistry to make it work. In previous projects that Vincent has been a part of, a lack of chemistry could lead to disagreements and break the team balance.

Fortunately for us, we split the job and everyone can do the part that he is more skilled in.

Congratulations on your ace new single ‘Arcanite’. What can you tell us about the release?

The story behind the track is so funny, because one night we were chilling in the studio with Leo, a friend of ours and he was showing us a viral video on the web about an old man speaking in strict dialect of his region (that it is so very different from ours) and he told us: “I challenge you to make a song with this!” So that’s what we did! We sampled the vocal and made the breakdown synths and it worked really well, we think we won at the end!

The single also features some great remixes from Ramon Tapia and Nihil Young, what did they bring to the table and are you happy with the results?

For us, it’s a pleasure and an honor to have this chance to have Ramon and Nihil in the same EP! With Nihil Young, we are really close friends and we already have released on his label Frequenza. The remix of Ramon Tapia is absolutely awesome: the icing on the cake on this release! We’re very grateful to have this opportunity.

You’ve already released on labels such as M5, Repressure, Advanced and Frequenza, which out of your own productions and remixes are your own personal favourites and why?

Our favourite is always the next one to come, even the one we haven’t started yet! When you do an EP, it is like having a baby, it’s your own creation and something really unique, so we love all of them the same but, we can not forget our ‘The Underworld’ release on Advanced, where we had the pleasure to have remixes from legends like Tom Hades and Lutzenkirchen (Thanks to our brother Alex Varveris). Our first ‘Wide Up EP’ on Repressure is also special because it was the starting point for the all of our releases and beginning of close cooperation with that label too. Sometimes behind a small release, there is a passionate man that also becomes your friend for life! Shout out to Abdelilah at Repressure.

How hard was it for you to break on to the scene and what tips would you give to those just starting out?

Fortunately, we both started POLS out of our passion for Techno, so with a lot of work, and a lot of sacrifices, we managed to build a studio to work out of. We strive to be professional and we work out of our studio almost every day. We work hard for all of our accomplishments and no one gives us anything for free. Over time we’ve had opportunities to build lasting relationships and the chance to perform and share our vision for POLS. Years ago it was only about the music and nothing else. Today to work in music requires being a part of something bigger, a producer and a DJ now have to be a brand or a business full time. We have to be a graphic designer, a photographer, a manager, and handle PR too.

So now maybe it is different and a bit harder to stand out also because there are a lot of young and upcoming producers that are learning how to produce very fast, and with all this technology available for all, everyone can have a copy of a DAW to try and learn how it works. So to those just starting out, we would like to say to remember to stay humble, have respect, be passionate about what you are doing, but don’t underestimate that, like everything, if you really want some results you have to play every card you have. Don’t be afraid to experience some closed doors, sometimes you will feel like your wasting your time, but that moment is the one that you should go over and never give up, and remember that it’s a long way to the top if you wanna rock’n roll!

Paolo: I have to say three of the most influential tracks for me are: 20hz by Capricorn, Spastik (Dubfire Rework) by Pastikman and Confronted by Pan-Pot.

Vincent: There are too many that I could mention here, but my love for electronic music began when I was really young and I was traveling with my parents Europe, and I remember I went to this festival with my father and there was The Prodigy playing on the stage No Good. That was something I will never forget!

Where are you most looking forward to playing this summer?

This summer we really don’t have a busy calendar, so feel free to book us! At the moment we will play in Berlin at Anomalie Art Club in August. We haven’t really tired to secure other bookings because we have been so focused on trying finish the next releases. We are working on planning a North American tour after ADE, more news on that soon.

Who else is kicking it musically for you on the Italian Techno scene right now that we should be looking out for?

We will forever be grateful to Johnny Kaos and Nihil Young because through working with them over the last two year we learned a lot and grew up faster than a cannonball! Their styles are different, but both deserved to be named here. Another one that we would like to name is Veerus, he lives close to us and he is really rocking the scene.

What are some of your biggest goals you hope to achieve over the next year? And, have you anything exciting in store for the near future?

The most important goal that we can reach is to improve our skills in what we are doing, and grow every day as artists, taking the chance to learn from every single occasion, as producers and as DJs, and of course also as people. We work with passion and dedication to try to be more established artists in the scene. It is also important to us to continue to develop our live show, because we feel that the vibe with the people, while you are playing for, is something that is priceless. Our future hopefully is bright, at least we hope! We have some collaborations forthcoming: Nihil Young, Classic Roots, Kususa, Juany Bravo, under different labels like to Frequenza, Music is 4 Lovers, KMS, Repressure Recordings. We have a lot of releases planned already and we are always working on new material. For future shows, we are also working on a hybrid-live set where we will use some live instruments in our DJ set, as well as and some cool visual effects too.

So yes, we have lot of expectations for the near future.

This question goes deep inside our souls, and thank you for giving us the chance to finally let everyone know, WE ARE BATMAN & ROBIN (both laugh)

‘Arcanite’ is out now on Frequenza Records and available on Beatport