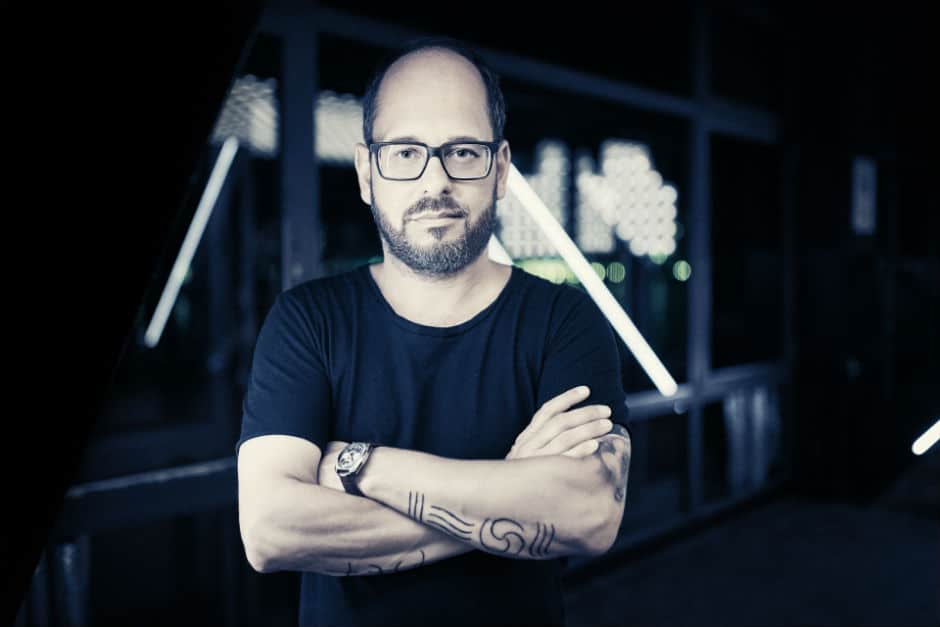 Myths abound in the north of Germany when it comes to techno ground zero, and they refuse to go away. Oliver Huntemann is one of a handful of children of the north who, for what seems like an eternity, add an element of credence to the mythology. He does not, of course, live in a snowy forest or at the edge of the polar oceans. The sun does, on occasion, shine down on Hamburg. Nevertheless, there is a tendency towards a hypothermic reduction in the rigorous efficiency of the Huntemann oeuvre. Images of cold storage warehouses, desolate heavy plant sites and bluish flesh are not entirely misplaced. Shards of German Engineering glimmer in his music, laced with persuasive logic, gruesome Darwinism. What remains: what works.

In “Brighter than the sun“, the English music theorist Kodwo Eshun depicts the birthplace of Kraftwerk, Dusseldorf, as the “Mississippi Delta of Techno“. Huntemann’s tracks may well have dragged themselves out of the same primaeval soup, but it was the far north which fired them with the necessary steel for clubland. The resulting creations are linear, free of fancy, charmingly direct. One particular London arbiter of taste sought to label the nature of his skeletal sound as “bare and stripped back to the metallic core“ – whereby Huntemann’s reduction does not end in thin minimalism, it draws attention to the core itself. Less is more to the max. The only luxury is a little dirt.

Whilst hordes of German producers and DJs set their satnavs for Berlin, Oliver Huntemann chose to head back home. His epicenter is, and will remain, the north. Hamburg, to be exact. This is where he produces his music and it is from here that he sets out into the world, thrilling the populous with his DJ sets.

Huntemann is also the owner of Senso Sounds, the label on which he released his Propaganda LP in 2017. The imprint is busy in the midst of releases two remix packages from the LP, the first of which came out November 30th (buy it here) and featured re-works from Alex Stein, Shall Ocin, Raxon, Carlo Ruetz, Hatzler, Marc Houle and Distale.

We catch up with the Hamburg producer, DJ and label owner to talk about his 2018 gigs, releases, weirdest food he has eaten and much more.

Hello Oliver, thank you for taking the time to chat with us here in the States. You were just here over the Thanksgiving holiday right? What did you get up to?

Yes, I was in NYC for a show at Elsewhere, so just a really, really short hop over to the states. Unfortunately it is not enough time to really enjoy the city but I did manage to hunt down some street art and watching the people going crazy on Black Friday.

How was it being back in the States? Do you feel the country changed since you began touring it?

It’s been so long since I’ve been in the US for the first time. Of course the country changed, like every country does. On the music side it was obvious that the EDM hype actually helped Techno to leave a bigger footprint in the US. I guess the people got used to electronic as it was everywhere and then started digging deeper.

What do you look forward to doing the most when you come Stateside?

I really love the diversity of the country, travelling from the east to the west, north to south. Stopping in the middle sometimes feels like travelling to another country. One day you’re surrounded by skyscrapers, next day you find yourself in a dessert or end up in one of those great national parks.

Is there a food you particularly like to eat over here?

I’m usually not super into fast food – but if I’m in the states I definitely have a ‘cheat day’ and will enjoy a good old burger with fries!

I see you’ll be spending the end of the year at EPIZODE in Vietnam and then Watergate in Berlin. Have you ever played Vietnam before?

A first timer! I have never played in Vietnam before, which makes it super special for me. To play in front of a completely unknown crowd is always intense. I just saw a new trailer for the festival, the location and vibe seem to be overwhelming.

Will you be getting to spend any time there outside of the festival? If so what are you looking to explore?

It’s a pity due to my tight gig schedule I’ll not even spend 24hrs in the country. I have to leave pretty quick though to be in Berlin in time.

In spring next year you’re playing Australia. Suffice to say your career has taken you all over the world – what’s your favorite country you’ve been to?

Kangaroos are calling! It’s really great to be back. Actually I play in Australia at least once a year since more than fifteen years. A fascinating country with a great vibe. I do travel a lot, mostly for touring but of course it’s also a passion. I can’t really say that I have favourite country. As my wife is from Mexico, this country indeed is a favourite. But the world is big and offers so much more to explore.

Is there still a country you’d love to visit someday?

There are always white spots on the map. The Chinese Wall is definetely on my bucket list as well as an expedition in the Arctic.

Are you willing to try anything when it comes to food?

I’m very open to try a lot, especially in more exotic countries – its a great way to get to know the local culture!

From fried ant eggs and crispy grashoppers in Mexico via raw sea urchin entrails in Japan to medium cooked Crocodile meat in Australia I’ve tried already much interesting stuff – list to be continued.

Definetely Labskaus, a traditional dish from the northern part of Germany. It’s made from potatoes, beetroot and minced beef, topped with a fried egg and a rolled pickled herring called Rollmops. Looks really disgusting but tastes phenomenal.

You’re proud of being from Hamburg and to still consider it home. What about it makes it a special city?

It’s just the whole mix, it’s a big city – but not too big. We do have a lot of green in our city but of course the harbour makes it just perfect. Next to that it’s just the people, open-minded and happy to just show the northern German spirit. Although we are rated to be dry and distanced I must say all Hamburg people I know have a very fine dry sense of humor.

Where can we find you hanging out in Hamburg when you’re not working on music?

My very favourite place is at home, enjoying time with my family on the balcony. Next to that I just love to stroll around my hood Altona, have a coffee at ‘Mikkels Café’ or to end up at the Elbstrand to watch the sunset while the ships arrive.

Do you have a favorite restaurant or two in Hamburg?

The Table‘ of Kevin Fehling, the youngest 3 star chef of Germany, is the place to be for me. He and his sommelier David Eitel are into electronic music and clubbing since many years and we always have stories to share. Not forgetting the menu is an entertaining first class taste adventure.

Can you walk us through your studio? Where is it and what can we find in it?

The studio’s heart is basically just a Mac with Logic equipped with a lot of plugins. Me and my studio mate André Winter stripped down the studio and reduced it to the max. I still own some old synthesizer but to be honest they’re more for the vibe. The native synths are so good by now that it’s just a way better flow to use those. An incomplete list: Logic Pro Audio, RME Fireface, Focal Twin 6BE Speakers, Arturia Analog Classic Vintage collection, Albino, Reaktor and some of my old synthesizer incl. Juno 106, Roland SH 101, Roland TR 808 & 909, TB 303 and MAM VF-11 Vocoder.

What are some of the rituals and routines you adopt when making music?

The most important routine is to go into the studio with a clear idea of what I want to do. To be very focused already, so I can start right away.

You’ve remained a prolific producer over so many years. What do you keep drawing inspiration from after all this time?

I mostly take those inspirations from being on tour, while all those days on the road you find so much inspiring stuff which really helps to develop new ideas. Meeting new people and artists every weekend also keeps my creative process going. I basically try not to stop, so the flow goes on and on.

As I said, your work ethic in the studio has been impressive, but the same can be said of the work you put in on your label Senso Sounds. You have two remix packages coming out covering your late 2017 LP, Propaganda. How did you go about selecting the remixers here?

It was a great year for Senso Sounds, we had a lot of great releases and new artists in the pipeline. For example a young producer from Berlin, Distale, had his debut on Senso Sounds – really impressive production skills. That’s why I also selected him to remix ’Trick 17’ on part one of the remixes.

The selection of the remix album was kind of easy, A few artists and long time companions like Carlo Ruetz, hatzler or André Winter were set from very beginning. But I’m also keen to have new artists around me who work with their style on my tracks such as Maksim Dark, Raxon, Shall Ocin and Fur Coat. Also Marc Houle is on board, I really love his style and I’m super happy that he took over ‘Poltergeist’

What other projects do you have lined up for 2019 that you can share with us?

The year starts off with some heavy long haul tours. South America twice in February, Mexico, Beirut and India are on the list as well as the above mentioned Australia Tour. With Senso Sounds we will continue to have showcases in unique venues like our intimate terrace party during Off Week in Barcelona. Part two of my Remix Album will be released in February and in addition I’m working already on a new single release. I try to keep myself busy all time!