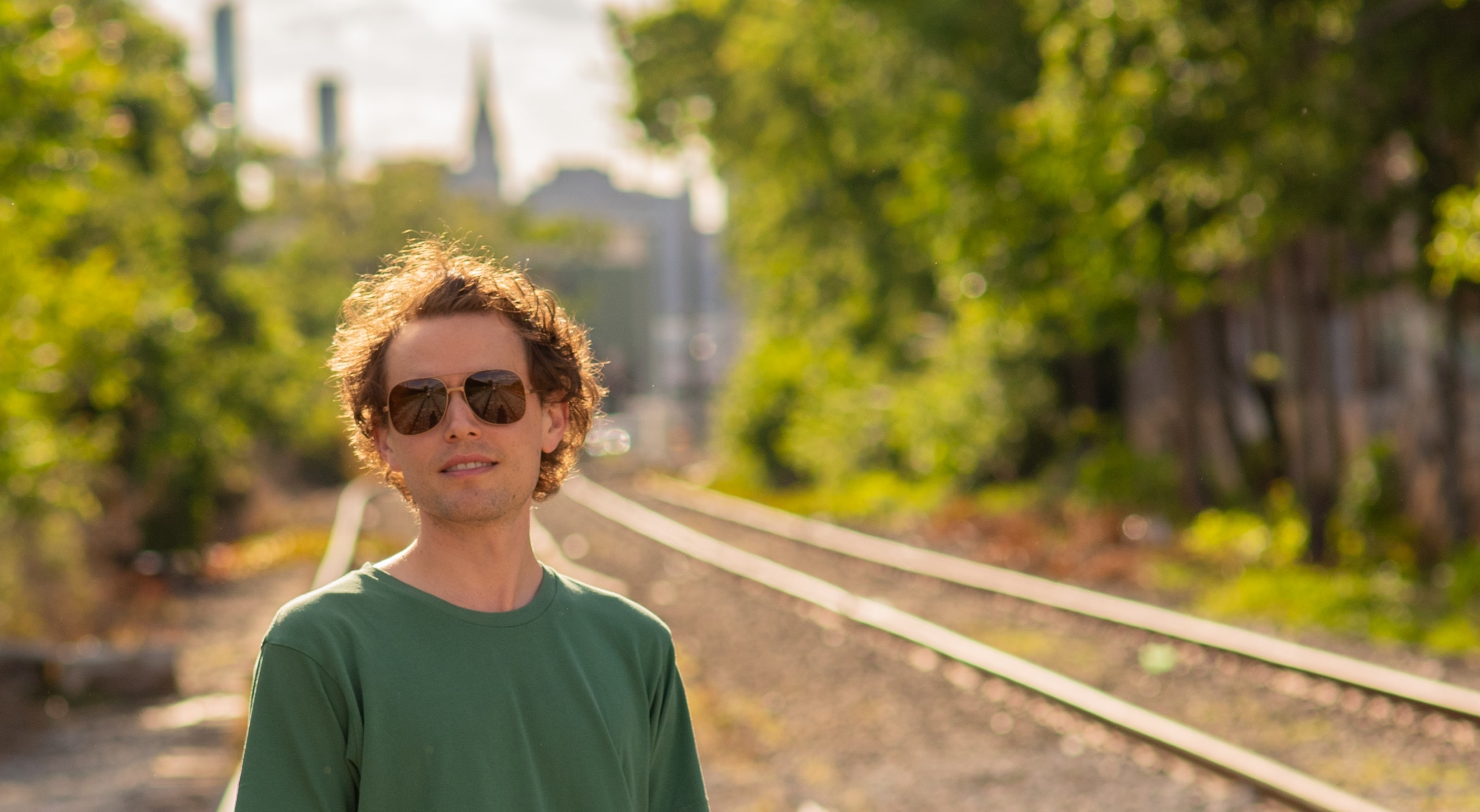 No stranger to electronic music’s various facets, J Gabriel is an artist who has been creating electronic music under various monikers for well over a decade. He is a regular of New York institutions Output and The Brooklyn Mirage.

His performances and releases have garnered recognition from some of the scene’s finest, having been remixed by the likes of Delano Smith, iO Mulen, Mike Shannon and many more. He recently returned to Eyedyllic Music with the sensational jazz-laden Levity, featuring two heavy-weight remixes from Perlon favourite Akufen.

6AM had an in-depth conversation with J Gabriel to discuss his roots in New York City and his involvement with the local scene there, the production of Levity, his love for cooking and much more!

Hi Joseph, thanks for taking the time to speak to us. For those that aren’t familiar can you give us an insight into who J Gabriel is?

Great to be in touch! J Gabriel is my house music project based here in NYC. Been at it with the moniker for around 10 years, but just started releasing and promoting things more recently. We launched the Onysia label last year as a platform for the project, and to showcase other artists pushing interesting sounds.

We love your new release ‘Levity’ on Eyedyllic Music. Can you talk us through the production process of this track?

Ah thank you, yes happy to explain a bit… So I’m often thinking about using the computer to its strengths, and analog equipment to theirs, then combining them in ways to get some special synergy. Sometimes machines don’t want to play nice together, especially some older equipment, it can be tricky heh – and generally I’m drawn to older gear and ways of working to build the main elements of a track. Of course arrangement and additional ideas are being added inside the computer, but I’m recording the main parts first using hardware. Levity started out with the bassline, an arpeggiator triggering an old monosynth, and tweaking the synth filter, resonance and envelope settings during the recording to get those variations. Then chords were played on the keyboards, through a Space Echo to add some nice grit and delay – a lot of Space Echo! Then drum samples sequenced in the MPC and the foundation is there. I often like using real drum recordings as samples, for Hi Hats and Snares especially, which you’re hearing on the track. And I love recording drums, often that’s the first step in starting something new, but I seem to remember in Levity it started differently…

The remixes on the release come from Perlon favourite Akufen. How did this come about?

Akufen is an artist I’ve loved for a while. He was playing at ReSolute Get’s Perlonized party a few years back, with the awesome lineup of ZIP, Fumiya Tanaka, Maayan Nidam, and Akufen. That was the first time we met. Actually it was funny because I can be chatty sometimes, especially when excited at parties, and started a conversation with an interesting fellow who turned out to be Marc (Akufen) – I had no idea. So once he revealed his identity, I ran over and grabbed one of the vinyl’s I’d stashed in the corner of the party somewhere, and handed it over as a demo (laughs). He played for over 4 hours that night, opening ceremonies type of set and it just really blew me away, how good it was. It felt like a situation where nobody wanted him to stop, so he just kept playing into an unplanned extended set! Not sure if that’s what actually happened, but just how it felt to me (laughs).

So, fast forward a few years and I’d invited Mike Shannon over to the studio one Sunday morning, after a special sunrise party he’d played here in Brooklyn. We were listening to some really interesting forthcoming music for his label and an Akufen remix he had ready for release struck me a certain special way. Tallying all that up, when the time for brainstorming remixers for Levity came about, Akufen was top of mind. Mike knew my music, cause we’d been on an EP together recently, and was happy to connect us. Kev O’Brien who’s a good friend and runs the Eyedyllic label really loved the idea, as he’s also a huge Akufen fan. We all got on a video chat and had a great conversation about working together on the release. So thanks Mike, Kev, and of course thanks Akufen!

You’ve had a host of big names remix your music in the past including Delano Smith, iO Mulen, Rick Wade and many more. Do you personally choose who remixes your tracks?

Yes, I’m seeking out quite specific producers on remixes, people who have been super inspiring over the years. It feels fitting to come full circle like that. I’m often brainstorming on who the dream remixer would be for a specific track, and a lot of times it’s the more veteran guys who come to mind. But then it’s like, wait who are the emerging artists that could really bring something special – so seeking a balance there too. It’s been amazing to have everyone involved so far – more to come!

What is your view on the current music scene in NYC and how has it changed over the years?

It’s really quite something. Of course, being New York there’s a large and diverse scene. But it depends on where you choose to hang out which shapes your views, you know? You’re really never getting the full picture, no matter how often you go out, there’s always something new to explore. Ten years ago I’d go to a lot of soulful house parties, with old school heads and music from someone like DJ Disciple. Also some of the older New York guys they’d book to play Cielo, classic house – that was my main area of interest. And in that scene you’re around a lot of people who’ve been a part of dance music for a very long time, some since the beginning. It’s a certain vibe, a really special one. I feel very grateful and lucky to live in a place with such deep roots and history and tradition which continues through to today.

When I moved to the East Williamsburg part of town, which is directly between the nightlife centers of Brooklyn, you can literally walk to and from many different parties. Whether it was Output in Williamsburg, or warehouse parties in industrial Bushwick, it was just a fortuitous coincidence, that’s where I’d settled. I’m talking like 10 minutes walk from the dancefloor to my bed – that makes it really easy, maybe too easy to go out? (laughs) Good problem to have I suppose!

In general, there’s a very high standard held, especially in the more underground part of the scene. Cause I get the impression that these days, big clubs are really hard to pull off here, mainly due to economic reasons. At some point, the city will hopefully change the policies and laws to be more supportive of nightlife culture, and some new awesome big institution of a club can emerge and create a new legacy. But still, there is no doubt that if you know where to look, you can have amazing world-class experiences with electronic music in New York. I’ve returned home after 3 weeks in Berlin and the following weekend gone straight into an 8 hour Dan Bell set in the grittiest, most amazing underground venue imaginable. Let’s just say it was one of the best parties of the year, for me. You have to give props to the Resolute team for continuing to throw proper parties, making this city super relevant for cutting edge minimal and staying true to an aesthetic which fits the music.

What has been one of your most memorable DJ sets that you have performed and why?

Late afternoon New Years Day at the Brooklyn Mirage a few years back. Somehow all the elements came together perfectly at that one. Imagine two huge warehouse rooms in parallel, Mirage style, and a “room in between” they called it, connecting the two big warehouses. The sound system setup was very good. The promoter had requested a more relaxed vibe in this space, as the warehouses were bound to be banging. I think it was Lee Burridge and Martinez Brothers in the adjacent rooms, really big room stuff. So it was packed out, and the first half I played complete freestyle. There was a bunch of instrumental music from Pink Floyd, Pete Rock, King Tubby, downtempo, everything. Then switched over and went into a couple of hours of deep atmospheric house tracks, stuff I enjoy at home but don’t get to play out much. Folks who had been raving for many hours were quite receptive, lots of heads and NYC scene promoters and friends in the room getting down with a more contemplative, kind of nostalgic feeling set – was a really special way to start the new year.

Who are your biggest influences?

Many musicians from many eras – definitely influenced greatly by the sound of the 70s, as it’s my favorite sounding period of recorded music… Also love the attitude, minimalism and sonics of 90s Hip-Hop.

Can you tell us three records that never leave your bag?

Audio Werner – Anytime: So playable and always a hit on the dancefloor. it’s such a fun bouncy bomb from one of my favorite producers. His more recent track “Filled In Later” is also very much a top pic…

Mike Shannon – The Box Is Open: Discovered this listening to one of his sets, I’m like hold on what’s this one? It stood out as my favorite from the recording, and turned out it’s his own track! Love when that happens. For me, it just sets the right mood in any space.

J Gabriel – Sunshine (This Time…): Not just listing my own track (laughs) it actually is in rotation for many sets. Actually got the idea from Mr C who said he was playing it almost every gig, and I thought, ya know what I’ll try playing it. Cause I actually don’t play my own stuff that much. Probably since I’ve listened to it a thousand times by the time it’s finished and release. But yeah it works quite nicely in most sets, which feels really good.

What interests do you have outside of music? Please tell us a bit about them.

Definitely cooking… there’ nothing like searing some fresh broccoli and garlic in a well-seasoned cast iron skillet! And recently chocolate making, a ton of fun – 100% high-quality organic ingredients, very dark, sweetened with agave. The most recent batch was lavender sea salt cashew! I’m also spending time exploring the endless restaurants, wine bars, etc that New York has to offer. Staying active is really important to me, biking around the city, yoga, exercise in general. It can have such a big impact on your state of mind and general happiness. Also, lots of work-related inspiration comes up for me during these activities.

Lastly, do you have any other releases in the pipeline you would like to tell us about?

There are many, but number one is an awesome 4 track Akufen EP which will be an upcoming release on Onysia. For J Gabriel and Chuffing Buffy there’s a Dub EP which includes a version from one of my favorites, Steve O’Sullivan. Super happy about that one and it shows a different style sound than I’ve put out so far… There’s a finished EP collaboration with Connie Yin, longtime resident for Resolute and an overall great musician. Then some tracks in collab with Mike Shannon, and also Shaun Reeves, which I’m real excited about.