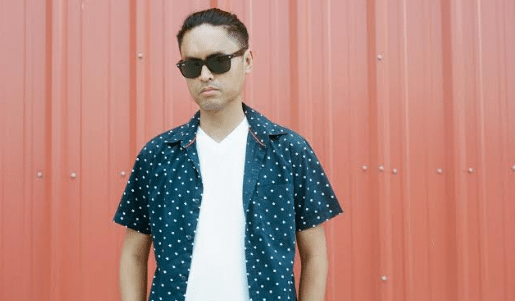 Michael Cobaria aka Micfreak is a producer, DJ and artist from Baltimore.

A multi-instrumentalist, Micfreak brings his love of piano, guitar and drums into his productions, playing everything himself to create his own unique sound. DJ Spen took notice of this emerging talent and took him under his wing, signing him for an album deal on Quantize Recordings, 6AMN digs deeper as he unleashes his debut album Feelin’ It.

Michael, it’s a pleasure to chat with you today, how are you?

I’m doing excellent thanks! Wrapping up a couple of tracks as we speak. I’m really excited about this release on Unquantize. So this has me really pumped up!

I’m an artist/musician/DJ/producer based in Baltimore, Maryland. I grew up in the Philippines and that’s where my musical roots developed. I used to play for bands, then after rehearsals and gigs we would go to raves. I first discovered Techno when I saw Derrick May in the Philippines. That’s where I learned to appreciate the 4 to the floor beat. I discovered the program Acid and Reason. I was blown away at how it was easy to edit loops and lay your ideas with those programs. That was the gateway for me in music production and discovered different genres of dance music.

What’s the story behind your name?

I booked my first gig without an artist name. The promoter asked me for a name and was in a hurry to get one. I didn’t wanna use my full name cause my last name is hard to pronounce so without any thought I just gave them Micfreak. (laughs). It kinda stuck with people, so I kept it! (laughs)

What specifically turned you on to making House Music, have you experimented much with other genres at all?

In the words of Eddie Amador, house music is a spiritual thing, a body thing, a soul thing. It’s the soulfulness of house that made fall in love with it really. As a person of faith, it really connected me to its spirituality. It’s the versatility of it and being able to merge different elements like funk, disco, soul is what makes it truly unique. I’ve pretty much produced and played all forms of music from jazz, rock, chill out, trance, breaks and now house music. I love playing with people in bands & other musicians don’t get me wrong, but being able to convey your ideas right away and have it done the way you want it has its own form of gratification as an artist.

Did you play instruments from a young age or was it something you picked up on later?

I played the violin when I was about 8 years old, and I didn’t like it. In college, I majored in music. I really wanted to be in a band and be a rock star or some kind of an instrumental hero. I knew what I wanted to do in life. I studied the piano, drums, guitar, and bass, so I was kinda like a one-man-band kinda guy. I knew that I wanted to make a living off of music as a creator and a performer. Then I discovered electronic music and then fell in love with house. It’s weird how I things take you in a different direction but still will take you to the path where you want to be. It all worked out, and I’m glad it turned out pretty cool.

Congratulations on delivering your very first album! What can you tell us about the release?

Thank you! It’s an 11 track album. All dance floor ready! It’s all about hooks, basslines, and beats in this album. It’s also an exploration of varied sounds and different sub-genres of house like jackin, deep tech, a bit of disco and tribal. There’s one track where I did a collab with Maryland artist Kevin Stucki. It was the first track that I signed with Quantize called Super Sunday.

Each track has its own character. For me, each one is exceptional. It was written at a point in time where I was really feeling some kind of emotion. I usually write tracks after playing shows cause I still get a high from it, so most of them are a reflection of my DJ sets except it’s a produced track. I think the one that I did indeed have a breeze doing was this track called Nothing To Show U. It Is a piano-driven track. I love the playing the piano, and every time I get to feature it on a track, it just gives me chills.

There’s real cross-pollination of genres throughout the album with everything from Jazz to Jackin house grooves, are you a bit of an all-around music fan then?

YES! Glad you noticed that. That was my intention right there! I did treat the album as like a DJ set where some tracks would work well as opening, then you have the peak time, and some will work as closing tracks.

How long did it take to write the album and what challenges did you have to overcome in the writing process?

Writing music for me is a natural thing. It’s been a part of my life, so I didn’t really have any struggle such as writer’s block, etc. Just like every person in the world the most significant challenge really is time. One thing that really helped me was this DC producers group called Headroom. We meet once a month to showcase and hear our productions in one of the best clubs in the east coast called Flash. Other producers critique and give pointers on how to improve your track. What I like about it is there’s a set deadline on when to submit your tracks so that made me conscious of time and work with a purpose. Majority of the tracks in the album we’re played in Headroom so I have more or less an idea if the track would be a club banger or would need some tweaking. It’s like having Funktion One speakers as your monitors and a sound -treated club as your studio!

Each release is very special. These are the guys who are the best at what they do as DJs and producers. I really look up to them, and they are the artist I aspire to be one day. So to get that support from them is really amazing!

As a relative newcomer to the scene, how hard has it been to break through and what have been your highlights?

Hard work, patience, and perseverance are key. My growth as a producer took a bit longer, but I’ve really enjoyed it and along with its ups and downs. I’ve been making music for about 10 years now, and it took me quite a bit of time to be noticed by some of the movers in the scene. The last 2 years I’ve put out a release almost every month so that kinda speaks about my dedication to this craft. Producing has been part of my everyday life. As far as highlights, just being able to come out once a month and DJ in different clubs is such a blessing for a producer. You get a feel of what sounds are being enjoyed by people, and you get to bring that back in the studio. I’ve started a small group with my friends called Decibel Collective. We host small parties at different venues around DC. We feature up and comers along with some of the best DJs in town. I think it’s important to give back to the community that has helped you grow and open doors for individuals that need some push.

Dig Your Own Whole by The Chemical Brothers on CD!

As a DJ what can we expect to hear in your sets?

I love performing in front of people. I try to bring some of that musician ethos in my DJ sets and try to be cohesive in dropping tracks. I take risks and sometimes get rewarded by it by seeing it in peoples faces and reactions. I sometimes bring drum machines or synths to differentiate it and add a bit of a live feel to my sets.

Who else is kicking it musically on the Baltimore House scene right now that we should be looking out for?

Baltimore is home to some of the legendary House music artists like DJ Spen, Karizma, Ultra Nate’, Thommy Davis, Brian Pope and a whole lot more who have paved the way for an artist like me and put Baltimore as a breeding ground for house music artists. It’s sad that several venues that support it have closed like the Paradox and Red Maple. There are venues that are slowly opening their places and more accepting of this sound. I’d like to give a shout out to the DC scene too! There is an awesome, thriving and diverse scene down there and they have opened their doors for me and welcomed me there as a part of their musical family. This guy Enamour is doing some awesome things, being signed by some of the biggest labels and dropping killer tunes consistently. Jon Swink who’s had a top Techno track release on Beatport is impressive!

What are some of your biggest goals you hope to achieve in 2019? And, have you anything exciting in store for us the near future?

I hope to play more gigs and hopefully out on the west coast and abroad! Right now though I got some exciting projects working with some of the legends in house music like Eddie Amador on Deeplife Records, Terrence Parker and DJ Spen on Quantize.

That I have a passion for cooking. I like to create recipes from scratch.

Feelin’ It  will be released February 15th on Traxsource & Spotify.