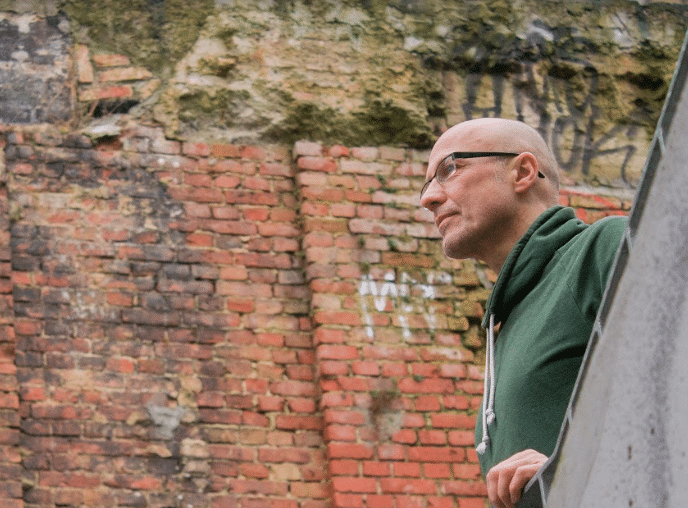 Dr.Nojoke is a producer and live-act born, raised and still living in Berlin.

For two decades now he helps to shape deep electronic dance music with a vision is so unique as the history of his city itself. Dr.Nojoke’s next EP is entitled zero.two and is due to be released on September 28th through his label CLIKNO.

We invited him to talk about his influences and approach.

You grew up in West-Berlin. You saw the Wall falling. What can you tell us about the transformation of Berlin over the years?

Hello. Thanks for having the opportunity to talk to you.

Well, Berlin was full of freaks in the 70ies and 80ies already. With freaks, I mean people, who escaped a normative life. West-Berlin was an ideal ground for individual expressions, be it politically, socially or artistically, When the Wall fell and the system broke down those people flooded into East-Berlin occupying spaces and empty buildings joining together with East-Germans. New things could flour. Techno became the first common culture of both Germanies after World War 2. Those were golden times, freedom without limits. Meanwhile, many districts are gentrified. Some clubs are instalments, but still, there is a lot of movement, venues open up and close down, Everybody is trying to find and fill a niche. There is no consistent scene existing, it´s totally split up. Berlin is kind of filled up with anything. You just have to pick it up. While a lot of interesting things happen all the time most of it I even miss out.

What did you do during the ’90s when the Germanies reunited and how did these times influence you?

I played myself electric guitars at that time, played in diverse bands pretty loud music, but I also was interested in electronic and experimental sounds. I loved trip hop, drum & bass, dub, ambient, IDM, glitch and such. It took a while until I discovered the Chain Reaction label and through it then Basic Channel and Maurizio, which totally changed things for me. When the Roland MC303 Groovebox came out in 1996 I bought one, got infected and started to implement electronic sounds in my projects. I self-released some purely electronic tracks on CDR in 1999 as „Die Hypnokommode“. Then I discovered minimal techno and related music though Kompakt, Force Lab/Inc, Mille Plateaux in the late 90ies. I just loved tiny, clicky and glitchy noises, errors so to say, and the idea to make music with it. In 2002 I started to investigate in digital music and software production myself, which was quite a thing back then. I immediately loved the simple workflow and new possibilities, not caring about midi-connections, limited storage space or hardware at all anymore. Total freedom!

You are constantly putting out music spread over a plethora of labels. Meanwhile, you founded your own label CLIKNO. What exactly is CLIKNO?

CLIKNO is a term derived from „clicks“ and „techno“, it sums anything I create as a reflection of my surroundings, things that get my attention. That can be street-art, architecture, exhibitions, political things, my neighbourhood, friends and sounds of course.

The word CLIKNO somehow just fell out of a friend´s mouth. I liked it immediately and I still use it to label my techno oriented music. But the term as a style is not sharply defined. I can fill it with anything I want. That is the kind of freedom I like – as long as it sounds like Dr.Nojoke.

CLIKNO is also the name of my music label and is reserved only for my cliknotic excursions. I decided to relaunch it as a vinyl label in 2018. In March I put out the “zero.one” EP, “zero.two” follows on September 28th. It is a double EP in two parts. Both vinyls are transparent in a transparent sleeve. 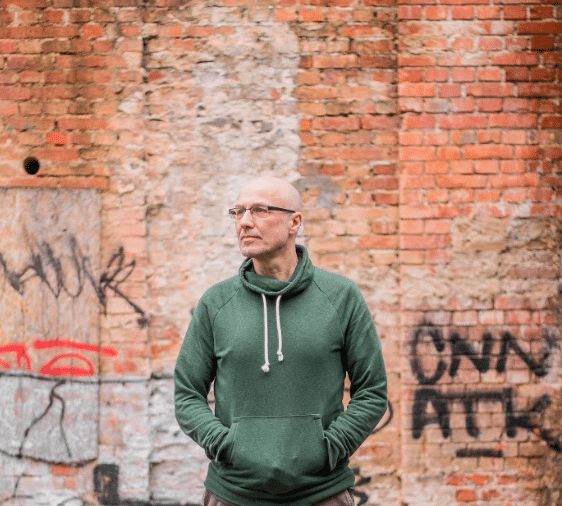 Could you tell us more about your production technique and how you made the tracks on your new EP zero.two?

When I explored the digital production possibilities I found it very natural to use field recordings and found sounds as I already owned binaural OKM microphones (great for ambiences) and other microphones. First I worked with the software Propellerhead Reason and Recycle and since 2005 I am an Ableton Live junkie. I just grab intuitively sounds from my archive, cut, edit, modulate and transform them into something electronically sounding. That is what I still do and what is a big and important part of my music. I treat the sounds a lot, I search for certain sound qualities. It´s kind of a sculpting process. For instance, I used glass marbles for the percussion-loops in the track Aplose, which is on the A-side of the zero.two EP. I just smashed the marbles on the floor and recorded that. When I listened to that I found some rhythmical and melodic phrases, which I layered so that it got that percussive groove. It sounds as if a hoard of freaks clang and bang pots and cans having a ritual, but actually it is just glass marbles. It has a dadaistic touch of course. I like to use objects, which are not regarded as musical instruments, to make some seriously sounding danceable music with it and I love to fool around. Kumuestu, the track on the flipside, has a similar story. It evolves also into a percussive groove with shifting loops, but it is darker and more for the drone and ambient techno heads.

Which other projects are you involved in and what’s up next?

Just this month I start my own radio show CLIKNOsophical Chatter on 199radio, a community radio station from London. In the first edition, I will focus on German electronic and related music from the nineties.

In November right after the zero.two EP I will put out an ambient and clicks album on Abandoned Audio, a sublabel of the well-known minimal techno label 31337. The album is entitled “Reconstructed Electric Bass-Guitar” and that tells the concept already.

Then I am working on a new exciting project together with the concert pianist Jan Gerdes. We are just about to send out our first demos and we are so damn curious, how it will be received.

Furthermore, I am involved in a theatrical reading and music project in the process called IT, which is initiated and directed by the actor, director and philosopher Marianne Kjaer Klausen. And with my friends in Berlin I run the open collective The POOL Berlin and as part of that the PLO or POOL Lab Orchestra, a freely jamming and improvising group of highly talented people. We play with up to seven people and we often have guests like Ditch, the artist formerly known as From Karaoke To Stardom, Akatana, Matt and Mark Thibideau, Fake_Electronics, Alka Rex et cetera.

I also throw private Kitchenparties irregularly, This and the activities with the POOL became nice social hubs and everyone helps to make it magic.

Would you let us know, what have been your favourite pieces of music over the years. Also, are there any types of music that you cannot relate to, or that do not resonate with you?

In my life I was always interested in new trends, streams and innovations in music and sound, let´s say contemporary music, and I had a lot of favorite artists. Some of them still sound so fresh to me, just timeless, such as the Velvet Underground, Joy Division, the Buzzcocks, Dinosaur Jr, Sonic Youth, Suicide, ESG, Liquid Liquid, The Residents, Can. For many artists I would choose just one or two albums.

Here is a short list of albums I would take to an island:

I know that is all such old stuff, mostly from the eighties, which were extremely fruitful and innovative years. More recently active artists I like are Colin Stetson, Raime, Emptyset, Kammerflimmer Kollektief, Radian, Burnt Friedman, Bing & Ruth, William Basinski, B/B/S/, Ambiq, Ricardo Villalobos, Gas, Pole, Tim Hecker … and all my friends from the POOL Berlin and UNOIKI collectives.

When it comes to dislikes I am tempted to say: all what’s on FM radio. Modern mainstream Pop and Hip Hop is terrible. Amazingly when there is a rootsy sounding hit such as Happy I do like it. I love the sound of the sixties. There is a certain sound quality in it I can relate to very much. On the other side I actually can´t get along with traditional jazz, blues, swing, rag, bop, modern – for me it starts to get interesting with free jazz and all that crosses genre-boundaries. Also I am not into all that celtic, gothic rock and folk. And I hate musicals, operas and German Schlager and Folk music.

What will possibly offend many people reading this I am not into early house and techno music. In these years I preferred acid jazz, trip hop, big beat and drum & bass.

Would you name a few German artists, that you think everyone should listen to?

What are your next dates?

Thanks for reading. I hope that was inspiring for you!