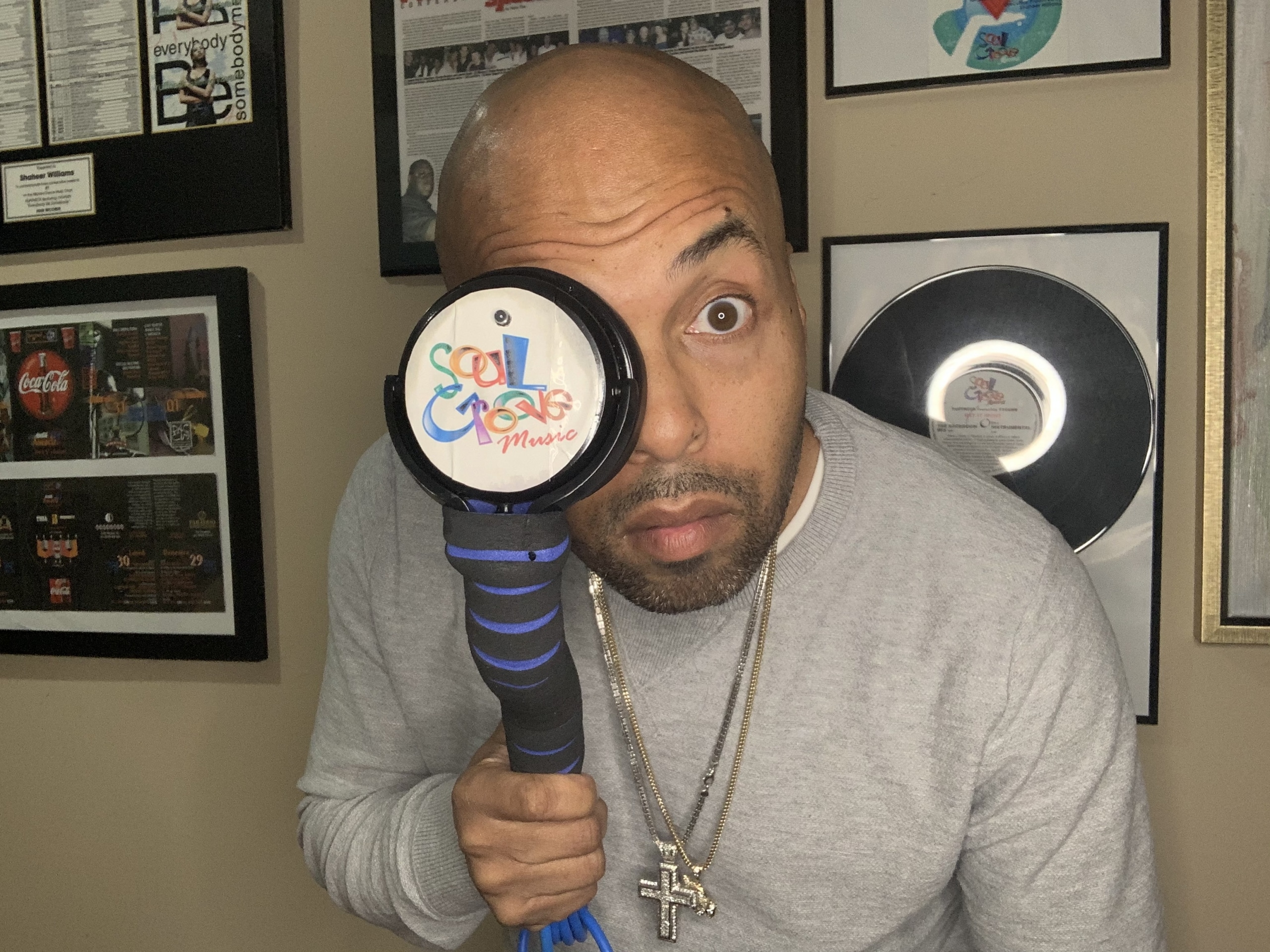 Nurturing his own brand of soulful house, Shaheer Williams launched Soul Groove Music back in 2004, which featured collaborations with Kimara Lovelace, Susu Bobien, Stephanie Cooke, Louie Vega, Kenny Bobien and Ann Nesby, among many. He also co-produced the international smash hit, ‘Everybody Be Somebody’ by Ruffneck feat Yavahn on MAW Records. After a few years of exploring other projects, including launching his own night spot in Newark, Shaheer is back in the studio and relaunching his much loved label with a stunning collab with Sheree Hicks.

6AM checks in to dig deeper…

Hi Shaheer, it’s a pleasure to chat with you today, how are you?

A pleasure to chat with you as well. I am tremendous, thank you!

Who or what first turned you on to Djing and producing music?

I was introduced to DJing at the age of 7 years old from my two cousins who where great DJs. I would watch them and they would drill me on the art of blending two songs together seamlessly. At the same time, I would listen to the radio mixshows of the Legendary Tee Scott, Shep Pettibone and Tony Humphries. I knew music was my love and my passion, so in order to be good in the art of DJing I would have to study the greats. I was introduced to production around the same age. I was able to sit in studio sessions with my uncle Leopoldo Fleming who played percussion for Miriam Makeba and Nina Simone. And also with my Cousin Derek Jenkins and Dwayne Spen Richardson of Backroom Productions, who produced the musical trio Jomanda. As I sat in the studio sessions and watched how songs were created, it sparked an interest to create my own songs and remixes.

Growing up, I listened to the Motown Sound who birthed the artists such as Stevie Wonder, The Jacksons, Smokie Robinson, Temptations. The Philly sound of Gamble and Huff, who’s artist were Teddy Pendergrass, Ojays, MFSB, Bue Magic. Quincy Jones, Aretha Frankin, Roberta Flack, Donny Hathaway. I also listened to El Gran Combo de Puerto Rico, Tito Puente, Eddie Palmieri. These were all the songs my parents played in my home as I was a child and they all influence me production wise. The melodies, the grooves and the musical arrangements all play a part of my production now.

What has been your most successful release to date?

My most successful release to date was ‘Everybody Be Somebody’ – Ruffneck Feat. Yavahn, released on MAW Records.

After a break for a number of years, you’ve just re-launched your Soul Groove Music label. What have you been up to in the meantime and what made you finally decide to get back in the studio?
I took time off from music due to the change in sound and the direction of dance music. I didn’t want to follow the sound of the moment, I wanted to make music from the heart and soul. I really needed sometime to find my creativity. In the meantime I opened up a club in New Jersey called ‘Fever bar and Lounge’, where I was the resident DJ. During the pandimic I had time to sit down and express myself through the music. So much was going on in the world and so many people close to me were suffering and dying from Covid-19. I realized I had something great to offer to the world, so I got back in the studio and expressed what I felt in song mode. From that point it was time to re-launch Soul Groove Music.

So you’re kicking things off for Soul Groove with your new single ‘Attention’ with Sheree Hicks. What we can expect to hear?

Classic Soul Groove Music sounds with a modern twist. We like to make timeless, soulful music that have lyrics with true meaning. I want to release songs that makes the hairs stand up on your arm, tap into your emotions and make you dance with joy. I feel ‘Attention’ brings all those elements with its great keys, sweet bassline and the captivating lyrics and performance by Sheree.

How did you connect with Sheree Hicks and will you be working together again in the future?

I heard so many songs by Sheree and every time I listened to her she just drew me closer to her lyrical vibe. I reached out to her on Social Media and the rest was history. Yes! Stay tuned, we will definitely be working together in the near future.

What else have you got line-up for Soul Groove that you can tell us about?

I have a DJ Shaheer Williams Remix of ‘Spread Love’ by Kenny Bobien Feat. Ann Nesby, ‘Kinda Love’ – DJ Shaheer Williams Feat. Stephanie Cooke, a single from Ruffneck Feat. Yavahn called ‘Reasons’, produced by Backroom Productions, of which I am one third of the production company and many more to come.

How much has the scene / industry changed since you took a break? Has it been an easy to get things up and running again?

The music scene change so much. My last song was put out on vinyl and now we are in a digital market. The business is pretty much the same, but the sound has changed, but that happens with every generation. Overall, good music is good music, so no matter how the industry has changed I will continue to release quality music from the heart and soul.

You’ve worked with some big names over the years including Louie Vega, Kenny Bobien and Ann Nesby, Kimara Lovelace, Susu Bobien, Backroom Productions and Stephanie Cooke, among many, who else would you like to work with?

I would like to work with Eric Roberson, Dwele, Lalah Hathaway, Ce Ce Peniston, Joi Coldwell and many more.

I generally go into my studio and Just vibe. I come up with the groove and put it into a song structure. As I come up with the hook, I sit with my writing team and we come up with a song. So if I have a song that I hear a certain voice on it, I contact the artist, as I did Sheree Hick for ‘Attention’. She wrote the song and after we recorded the vocals, then I went back into the studio and finished up the song. My keyboard player Tiger Wilson also added his special touches well.

I work on the Slate MTI 2 touch screens, Logic pro x, Apollo, Quad, UAD and wave pluggin’s, just to name a few. My favourite pieces of kit and all time go to are the AKAI MPC and the AKAI 950.

Visual ‘The Music Got Me’. This was the first song I heard walking into the New Jersey Legendary Club Zanzibar at a very young age. Hearing Tony Humphries play this song on a major sound system took me over the edge as a DJ. Years later as I became a DJ at that same Club, that moment hearing Tony play that song never left my mind. Its always that one song that sticks to you and Visual ‘The Music Got Me’ was it.

‘What I Need’ by Soft House Company, it’s an all time house classic.

What’s next for Shaheer?