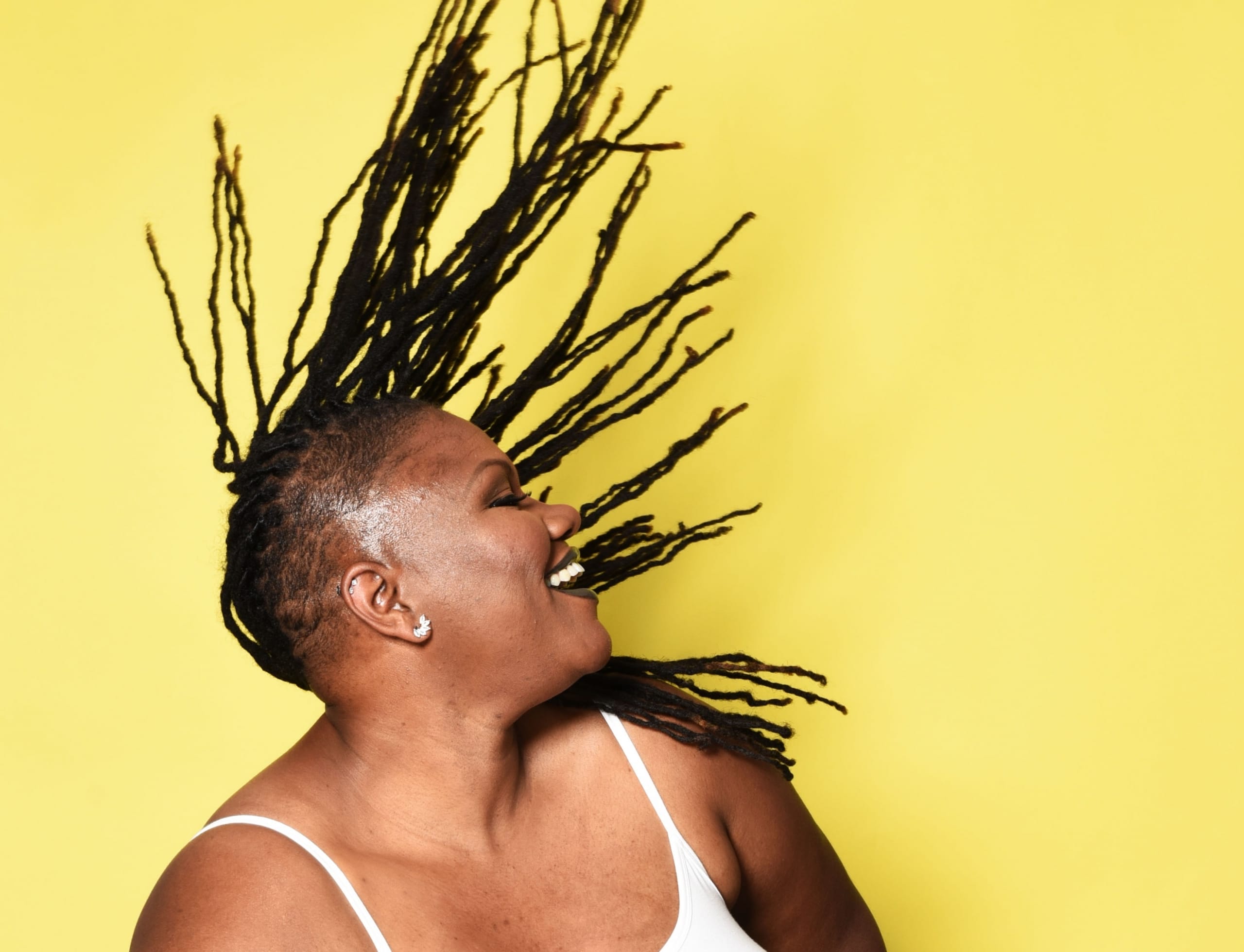 Without need of much further introduction, Tasha LaRae is the lead female vocalist in the legendary Hip-Hop band Arrested Development. In addition to her ongoing tours and writing with the band, in recent years she’s also been making waves on the house scene, honing her own unique soulful sound and penning her brilliant debut solo album, ‘Tasha’.

6AM checks in with the songbird to find out more…

Hi Tasha, it’s a pleasure to chat with you today, how has your summer been?

Hello! Likewise, my summer has been very enjoyable and relaxing. And now that the cooler weather is here, I’m excited to dress for the fall.

What first turned you on to singing and songwriting?

I first learned to sing from my mother. From a really young age, I would follow her around the house singing everything she did. My mother also played a lot of music like Mahalia Jackson, Whitney Houston and Yolanda Adams, so I would sing along to them as well, trying to sound just like them. While singing started as a natural skill that I constantly work to improve, songwriting is a skill I didn’t learn until I moved to Atlanta in my late teens. I wanted to write my own songs, but didn’t know what to say or how to say it. But the more my skills developed the easier it was for me to express myself in other areas of my life.

Who or what inspires your songs?

Real life experiences inspire my songs. Anything from a phone conversation with a friend, to watching clouds float by while staring out the window of an airplane, the inspiration for music is all around. I try to capture as many of those moments as possible and set them to melody.

You have already had an amazing career as part for the Grammy Award winning band Arrested Development, please tell us a little about your history with the band?

I was singing for an event in Atlanta as a background vocalist and Speech, the co-founder & leader of the band, was also attending the event. We had a mutual friend at the time who connected us via email. The day after the event I received an email from Speech asking if I’d be interested in auditioning for the group. A few months later, I did my audition and by January, 2008 I started touring with them. I have the pleasure of traveling the world with them spreading uplifting, feel-good music and collaborating on albums starting with ‘Strong’ (2009), ‘Standing at the Crossroads’ (2012), ‘This Was Never Home’ (2016), ‘Changing The Narrative’ (2016), & ‘Craft & Optics’ (2018). One of my favorite moments happened this September when we were awarded the 2019 Hip Hop Icon Award by Black Music Honors for our contributions to music for the past 30 years.

And is there anything new on the horizon for AR that you can tell us about?

We are still performing around the world and writing new material. Speech is also producing a documentary called Ni%*a Factory and a film called 16 Bars.

You’re releasing your wonderful debut solo album ‘Tasha’. What can you tell us about the release and are you pleased with the results?

Thank you. I am very excited about the release of ‘Tasha’! This album truly reflects how I view the world and my belief in our ability as human beings to accomplish extraordinary things. I created this album for people in motion. Meaning, people who are actively doing their best, on a daily basis, to create the best life for themselves, their loved ones, and/or their community. As we travel the road of bringing our dreams or goals into reality, there are a lot of chances to give up and quit. My desire is that the next time someone feels like quitting or giving up, the lyrics to one of these songs will automatically play in their mind and it helps them to keep going. I am very pleased with how the album turned out and eternally thankful for every person who had a hand in helping me create it.

With a successful music career spanning decades, why has it taken you so long to release a solo album?

Starting my musical journey with Arrested Development in 2008 was a pivotal moment in my music career. Prior to the band, I spent my time developing my songwriting skills and trying to figure out who I was as a woman, an artist and a businesswoman. I released several EP’s as an independent artist (The Tasha LaRae EP 2010 and Light 2018), worked as a background vocalist, vocal coach & studio session singer and continued to learn more about the business of music. By the time I connected with Quantize Recordings in 2016, I had a more well-rounded view of the world and how I fit in it. Releasing my first LP is a milestone that represents my journey so far while simultaneously fueling my fire for where I’d like to go next.

The album is quite a departure from the style of AR, so who or what turned you on to making house music?

I was introduced to house music in the mid-2000s by DJ Tallboy, DJ Kemit and TheFREEZproject. They encouraged me to learn more about the world of house and the more I studied, the deeper I felt connected to it. I would work with them in the studio writing lyrics and creating melodies to tracks they created and it helped me to develop my style & writing approach. I would also call them to ask a million questions to which they are always so generous to share their wisdom and experience.

You also have 2 classic cover versions on the album, Angie Stone’s ‘Wish I Didn’t Miss You’ and Teena Marie’s ‘I Need Your Lovin’. What made you choose those to cover and do they have a special significance to you?

DJ Spen & DJ Thommy Davis are the masterminds behind this one! They approached me about ‘I Need Your Lovin’ first and my initial thought was, “uhh, that’s Teena Marie…how in the world am I supposed to pull off a Teena Marie song?!!” ha! But then I said, “YOLO” (you only live once) and I went for it. I’m so glad I did. For the Angie Stone cover, I’ve admired her voice for years and jumped at the chance to remake one of her classics. Her lyrics are so honest and real and I appreciated the level of vulnerability the song displays.

What’s your favourite track on the album and why?

I have several favorites, but If I can only pick one, it’s a tie between “Uncomfortable” & ” ‘Til You Get There”. Both of these songs played in my head throughout the creation of this project as well as other areas of my life when I needed the encouragement most. And now that the album is being released soon, their lyrics continue to push me to keep going.

You have worked with a lot of different producers/artists on the album including DJ Spen, Jay Kutz, Rhemi, Spencer Morales (DJ Spen & John Morales), Master Mello, DJ Kemit, Sebb Junior, Soulfuledge, Jihad Muhammad, Beat Rivals, Earl Tutu & John Khan, Opolopo and Arrested Development bandmate, Speech. How long did the project take to put together and how did you go about selecting the artists you worked with?

The entire creation process took us about 2-3 years to complete. Collaborating with each of the producers, songwriters and artists featured happened very organically. Many of these connections came through Quantize – all of which seemed to be at the perfect time, every time.

What pearls of wisdom have you got that you can share with new singer/songwriters who are just starting out?

Understand that no matter what genre of music you want to shine in, you will have to put in a lot of work developing your artistry, cultivating your business skills and understanding who you are as a person. You will hear “no” a lot more times than you’ll hear “yes”. Don’t take it personally. Use these moments as opportunities to strengthen your skills and keep moving forward.

Janet Jackson’s “Together Again” holds a special place in my heart because it was the first time I experienced a celebration of the life of a loved one who’d passed on. I think it’s a beautiful tribute that helps heal the hurt and grief that comes with loss. Her song became an inspiration for me as I wrote “Angel Fly” the day after my grandfather passed.

That’s a tough one to answer. Many of them are already on this project and there are a few I hope to work with in the future.

I’m working on my touring calendar for 2020 and looking forward to the festival season next summer. Hopefully, I’ll be coming to a city near you soon.