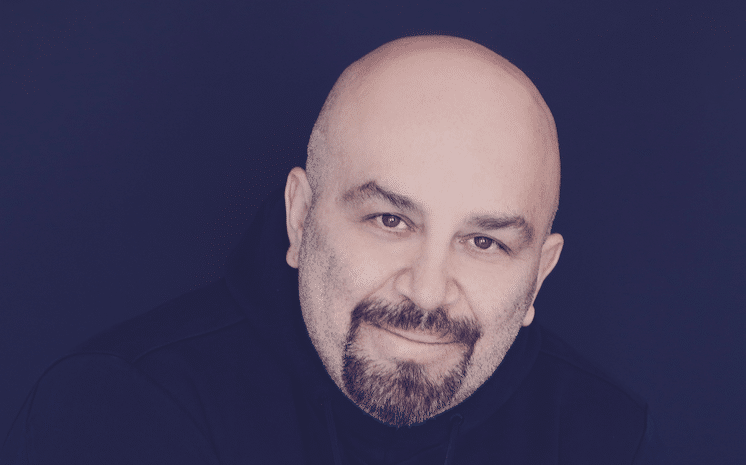 Now if there’s a guy who knows how to cut a decent dance track, it’s the legendary Angel Moraes! Having been on the scene for over 25 years and still smashing dance floors with his unique house jams, we dig deeper with the legend about his musical career, his bespoke sound systems and his new EP Dancin’ Wit My Baby…

Hi Angel, it’s a pleasure to chat with you today, how is 2019 treating you so far?

Not bad actually, lots of exciting new things happening including new releases on Griffintown and Nervous Records, so pretty good so far.

What goals have you set yourself for this year and what do you hope to achieve?

I never really set goals form year to year, although I must admit I probably should. The reason Ii don’t is because in life there are very few things that are in your total control, especially in this business a lot of times you have to depend on others to fully materialize your goals and if I set goals for myself I don’t want to be disappointed because of someone else’s shortcomings.

For those who don’t know you, who or what first turned you on to DJing and producing and what was your breakthrough track?

The first time I DJed for a crowd was for my Aunt’s wedding, believe it or not, I was 13 years old and that was around the same time I saw a DJ play for a crowd of over 1000 people at a roller skating rink in Brooklyn. When I saw that I told myself that’s what I want to do.

I’ve been told that my sound is deep, chunky, rhythmic and relenting like a freight train.

You’ve taken a bit of a break from music production over the past couple of years until recently, what fuelled the decision and are you now glad to be back in the saddle?

It definitely seems like I’ve taken a break but quite the contrary, I have been producing quite a bit over the years and have lots in pre-production, I just haven’t put anything out because of how over-saturated I see the market. So I didn’t want my music falling through the cracks, also because I really didn’t feel I had a label I could trust, and I don’t mean that from a financial standpoint, but more importantly I to make sure if I start putting out music again that it would get as much exposure as possible for the tracks. One of my main requirements with Kirk at Griffintown was he must secure some kind of PR/promo for the music, thankfully Sarah at Favouritizm took on the task and I couldn’t be happier, she’s doing a great job, thanks Sarah.

So you’re back and about to release your ace new ‘Dancin’ Wit My Baby EP’, how does it sound and are you happy with the results?

Obviously, I think it sounds great otherwise I wouldn’t have put it out so I’m very happy with the track and very happy with Darius Syrossian’s remix. His in your face, energetic approach is a great contrast to my original, but staying true to the template, I love it.

Both tracks carry a distinct Disco/Soul influence, what was the inspiration behind the release?

Really there were no influences, more trying to take something like that and give it a fresh new groove, but stay true to the integrity of what it was, which is not an easy thing to do. Lots of times I wouldn’t play things like this cause they are over the top or not well enough produced, so I tried to find that happy medium.

There seems to be a massive resurgence in Disco music at the moment, as someone who used to frequent the legendary Paradise Garage, how do you feel about it?

If it’s done right and is able to bring something new while staying true to the meat and potatoes of what the original source is, then I love it

You’ve been contributing to the dance scene for over 25 years, how does the scene compare now to back in the day and what needs to change for the better?

Wow this is a good question. While it’s great to be aided by the computer to realize a musical vision, I think its blasphemy to use it to create your “musical vision” and call it yours because it’s not yours. I watch people copy and paste pieces of other music to create tracks in 30 mins. The problem with that is: 1. its not your music. 2. you’re not creating fuck all, you are copying and pasting. and 3. because of the ease of it you don’t gain any discipline, therefore, you don’t respect it.

I am thankful for the computer, I really am, but I think it has hurt us in more ways than it has helped us. Perhaps its because of the timeline that I have been alive (the greatest in history as far as music is concerned in my opinion), but I firmly believe that need is the mother of invention/creation, if we have some kind of device that does 80-90% of the work for us, how are we gonna stimulate creativity? Less we forget music is an art form not a science project.

You spend a lot of time between both Barcelona and Canada, how do the two club scene’s compare?

I love Barcelona I really do, but If I’m gonna be honest then I have to say that there is a certain superficiality and somewhat of a synthetic aura about Barcelona’s nightlife to the point that a true underground house party doesn’t exist, whereas in Montreal its pure and feels very real and true, you get the feeling people are really into the music when they love cause if they don’t they´ll let you know.

In addition to your production and DJ talents, you’ve designed and built some amazing sound systems, including the work famous Stereo Club in Montreal and you’re currently building a new one in Barcelona that many top jocks are raving about. How did you get into sound design and what in your opinion makes the perfect sound system?

Another great question. Stereo’s sound system was inspired by my nights at the Paradise Garage and the truth is when the Garage closed I hadn’t heard that type of sound till the original Sound Factory and Sound Factory bar opened. Then when they closed nobody had that monster sound anywhere, so I decided I wanted to hear it again and built my own, LOL. Most people thought I was crazy, but it worked and Stereo is still there 20 years later, so I guess I wasn’t that crazy. I ain’t no genius and people are quick to judge, but everything is crazy until you do it. Then all of a sudden it’s genius, people lack vision or balls or both sometimes, so I don’t mind being the guinea pig every once in a while. This is why I´m doing what I´m doing in Barcelona for the reason I mentioned earlier. Barcelona doesn’t have a true underground club to represent what I feel is a great underground venue, so I decided to create something like what I did with Stereo here in the Catalan city. Although the mentality here is very different and there’s lots of envy and lots of cut throat, just like anywhere else in nightlife, so we’ll just have to wait and see if people embrace it instead of sabotage it.

Your own discography is pretty huge, have you got a favourite release or remix and which was the biggest labour of love to create?

I’ve never really thought about this although Imm sure if I sat down and listen to everything I’ve done in one sitting there would be things that I think are better than others. that being said my most favorite thing is when I write a song and when I hear the singer nail it as I’ve heard it in my head. There’s nothing like that.

In 1996 you helped reshape the face of dancing music, inspiring many to take a different approach to the way tracks were produced when you released the classic underground anthem ‘Welcome To The Factory’. Did you anticipate the record would have such a huge impact and what pearls of wisdom have you got that you can share with new producers just starting out?

As with some of my tracks “Factory” was a fluke creation and a total “roll of the dice”. When I laid down the bassline I knew I had something special, but as with anything you create you hope people will like it, but I had no idea how people where going to react. It was extraordinary what happened with “Factory”, it truly changes a bit of the production landscape and ushered in a new approach in house music production.

What’s been your most memorable gig to date and where would you most love to play in the future?

Well put yourself in my shoes for a minute, I got the change to create one of the greatest clubs in modern history, to design build and install one of the baddest sound systems in modern history and own the place, so you tell me where do you think are my most memorable sets? (laughs)

My sets at Stereo are amongst my favorites cause it was my place so it was total freedom. Sometimes I’d play 3 or 4 hours and on several occasions for 10, 12 hours and on a few occasions played 17 hours from 2am till 7pm the next night. I’ve had some amazing sets in Ireland, Scotland and in Britain, Italy, so many in Spain and Miami, so it’s really hard to single one out.

I guess I would have to say “Can’t Play Around” by Lace. When I was first introduced to the Paradise Garage this record was already in rotation there and my friend Edwin would point it out every time it came on because he absolutely loved it but I didn’t get it, in fact, I hated it. Then one day Edwin out of frustration takes me to the middle of the dance floor and says to me “Angel listen to her heart, listen to how she is singing about the way sometimes pain can be so much better when you’re making love” and all of a sudden it clicked, this is not some girl wailing on a mic, these are emotions, real emotions which is what Edwin was saying all along. As I’m writing this I got a bit teary eyed cause I can still hear him, may he rest in peace. he passed away long ago, but I thank him all the time for talking a little straight kid like me into a wonderful gay Paradise and making me understand the real meaning of music.

(Laughs) This one will make people go huh? I never use the same socks twice, I put on a fresh new pair of socks from the pack every day. (laughs)

Funny though because I’ve told this to several of my friends and explained it so now they do it. (laughs).

Thanks for your time.