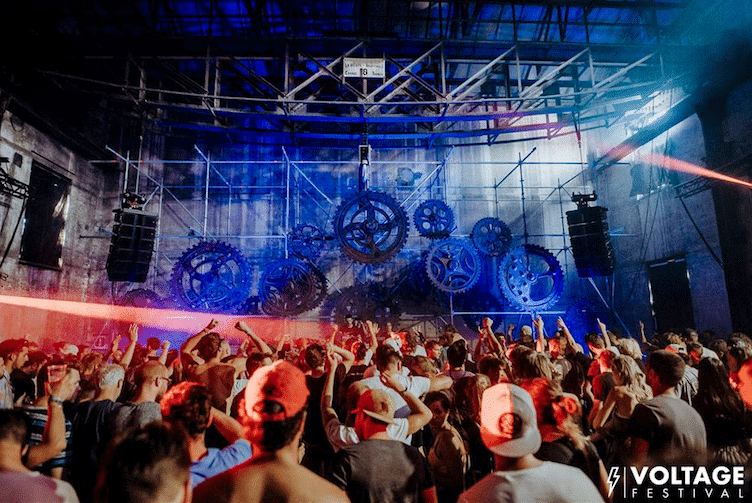 999999999, which reads as “Nine Times Nine,” is an abstract concept from the minds of two people who do not feel the need to define it.

It is spontaneous, random, unlimited. This project, officially started in July 2016, has already affected several important Clubs and Parties in different cities in Europe and aroused much interest even outside the continent.

First two releases on their label “Nine Times Nine” and the most recent appearance on Planet Rhythm special “303” vinyl release were immediately sold out after few hours.

Live is what they are whether in or out of the studio, they are spontaneous. Improvisation with hardware is the key element of their performance and is impossible to replicate.

Recently, they were interviewed by French blog Itineraire B to discuss their project and dig deeper into what they’re all about. Enjoy the translated interview below:

It’s a reflection of who we are, we do not like to give out too much personal information since we think the focus should be on the music. The people behind the project is just a secondary aspect.

As you just mentioned, a mysterious duo is behind 999999999, how did this friendship come about?

We clicked immediately: we had very similar taste in music but especially the same motivation and the same goals even despite the age difference.

What was your beginning in the electronic music scene?

It was a slow process, listening and studying of what was, what is and what will be in the electronic scene. We studied the history of electronic music, listened to a lot of records, and from there we started trying out, playing the first tracks, shaping our own sound, our own identity.

Your studio productions are made with many machines (Octatrack, Analog Four..), when you started were you using this many machines?

No, our first approach in studio was through the classic DAW (Ableton, Logic) but we felt the process was lacking spontaneity and most of the time we spent hours playing around without feeling truly satisfied. At that point we started to integrate some hardware until we went to a purely analogue approach. Obviously, the work of editing and post-production is still digital.

What inspired you to work on live music and be a live act?

Playing live is the most gratifying. Playing records from other artists is not the same feeling. « Live » for us means interacting with machines in every single second, it means improvising, never taking anything for granted. Each of our live performances always sounds different because improvisation part is essential of the gig, it gives us that adrenaline that appears to be missing when we simply play a track.

When was your first live show?

We officially launched our project only last year in July with the first release NTN001. We wanted to give priority producing more tracks before heading on tour, but we did set up a live and performed it in Berlin, at Griessmuehle last November.

How do you guys work in the studio, can you describe your creative process?

There is not a fixed pattern, because as we said, we want our music to be less rational and more improvised. The key is the acid sound of the 303, once we like something, we start to work with the other elements (drum, layers).

You launched your own label, NineTimesNine, which is also where you released your first EP “000000002”. Will the imprint only focus on your own work or also that of others?

Currently we give priority to our productions in our label. We feel the need to establish our style with complete freedom and only in NineTimesNine can that freedom happen completely, but obviously we do not exclude the possibility of collaborations, remixes and productions of other artists in the future.

In another interview, you stated, “What’s important is the quality of the music released, not the format”. When you started to release your productions, did you start with vinyl or digital?

We do not want to enter the classic debate “vinyl is better than digital,”. There are so many technical aspects that could keep us talking or hours. Let’s just say that we understand perfectly well what it means to release your music on vinyl and the efforts that go with this choice. Vinyl is a priority for us, but it should not be an obstacle for those who want to play our music without turntables, we also make every available in digital format through our Bandcamp page.

Your vinyl releases have been selling out in no time, how does this make you feel?

It’s definitely a good feeling, that motivates us a lot … We did not think to have so much positive feedback in such a short time. We just thought of making music we like (by selecting several tracks and discarding many others), not on producing music to please people or to sell.

What are some things you are working on as far as the future direction of your music, in and out fo the studio?

We are working very hard every day to evolve our sound and integrate our machines with the modular system. It will definitely be an integral part of our future productions and live performances. We want to work more on experimental/IBM sounds in a hypothetical album to be released in the next two years.

What’s your opinion on the Italian techno scene? Does it inspire you? Do you see yourself staying there or do you feel like you need to move to another place to pursue your career?

The Italian techno scene is full of talents, many of them still relatively unknown. We follow the scene but we prefer not to overthink it but just get inspired to conceive our own vision of techno.

Living somewhere where you are surrounded by techno every single day (as in Berlin) can definitely be inspiring, but currently, we do not feel the need to make this move. We are aware that if you have the right motivation, you can achieve great fulfilment regardless of where you live.