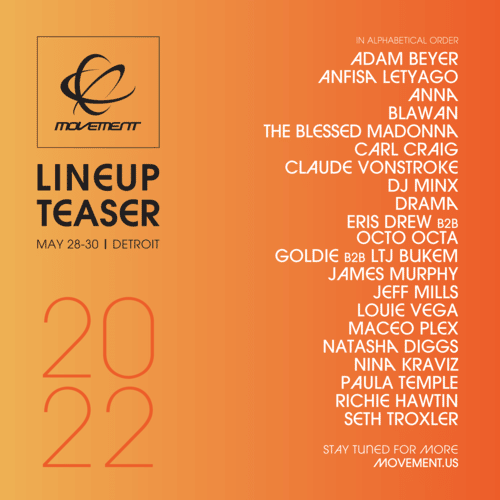 Movement Festival returns for the first time since 2019. Music fans will once again be able to make the pilgrimage to Detroit, the mecca of Techno music, for three days of diverse curation on Memorial Day Weekend (May 28-30, 2022) inside Hart Plaza at downtown Detroit’s riverfront. Today’s lineup teaser offers an early taste of the breadth of the festival’s programming, featuring an inspired selection of dance music’s most in-demand artists, underground mainstays, and notable first-time performers; a potent cross section of seasoned vets and future generations of electronic music.

This year’s Movement Stage headliners will include Swedish producer and Drumcode label boss Adam Beyer; Techno titan Richie Hawtin; as well as acclaimed Techno pioneer, producer, and composer Jeff Mills. The Detroit native makes his long-awaited return to Movement for a special performance celebrating 30 years of his iconic label, Axis Records. “Of all the places I’ve traveled to and audiences I’ve played music for, Detroit is still the city that remains the barometer of advanced creative knowledge and technique,” states Mills. “It’s special because of what the long list of native Detroit musicians that have contributed to the world of music. It’s a place that is infamous for proposing new ways and ideas as well as a unique and common viewpoint on the future of music. The city taught me to never fear what lies beyond, but embrace it as a means to advance the music art form. I look forward to Movement 2022 – returning back to the city and to the people that taught me and the World everything.”

Read More: 6 Techno Subgenres You Need to Know About

The 20 performances announced today, in alphabetical order, are as follows:

Movement 2022 3-Day and 1-Day Passes for both GA and VIP are on sale now at www.movement.us. Payment Plan options are also available.