Are We Taking The Underground Scene Too Seriously? – An Interview with Austin Gebbia (Dear Morni) 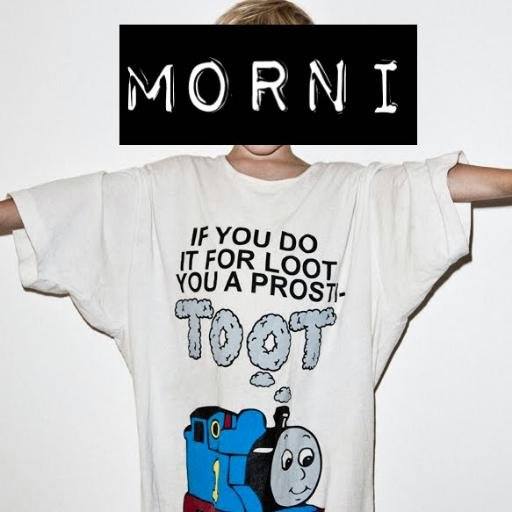 Are We Taking The Underground Scene Too Seriously? – An Interview with Austin Gebbia (Dear Morni)

The mere mention of clubbing and nightlife evokes thoughts of dark rooms, a dance floor filled with black-clad partygoers, sunglasses and a sense of elitism that would put the Royal family to shame. In all fairness, it’s hard to not imagine nightlife, and in particularly the techno scene, as a truly serious affair. But is it really?

Early last year, I encountered a seemingly bizarre Twitter account that used the handle @DearMorni. Whoever this Dear Morni was, they clearly enjoyed making crude yet pin-pointed jokes at the expense of the DJs, clubs, and really anything that was dance music related with a focus on underground house and techno. The more tweets I read, the more I laughed. The jokes were all brutal yet innocent, and always contained at least a pinch of truth. Most were accompanied by haphazard memes that were also getting love on Dear Morni’s Instagram account. The photoshop job on each was boorish but I could sense it was part of gig  – there was sure nothing serious about Dear Morni. 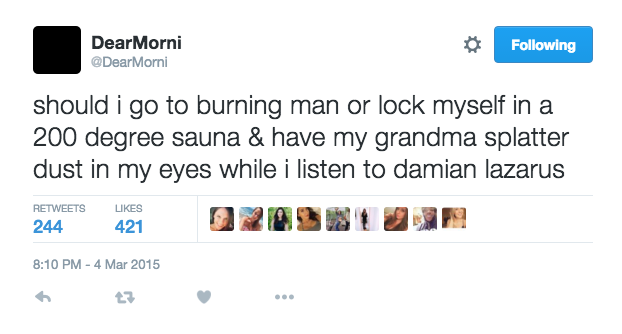 Dear Morni became so popular amongst his followers that an online store popped up selling t-shirts and sweaters emblazoned with the very same memes and jokes making the rounds online. I can’t deny that I was hooked. Finally there was someone out there who not only understood the scene I loved, but grasped the concept of satire and the need to add laughter to what otherwise could be a bleak hole of unneeded seriousness. And I wasn’t alone, for esteemed artists the caliber of Seth Troxler, Lee Foss and Tale of Us began to not only follow Dear Morni but share the very same content that made fun of them and their scene. It appeared that Troxler particularly enjoyed Dear Morni’s humor and shortly after “Troxler Doing Things” was born, an Instagram account focused on highlighting the interestingly quirky sides of the outspoken Kalamazoo producer. Again, I was sold – I had to meet the person responsible for the countless internet laughs. 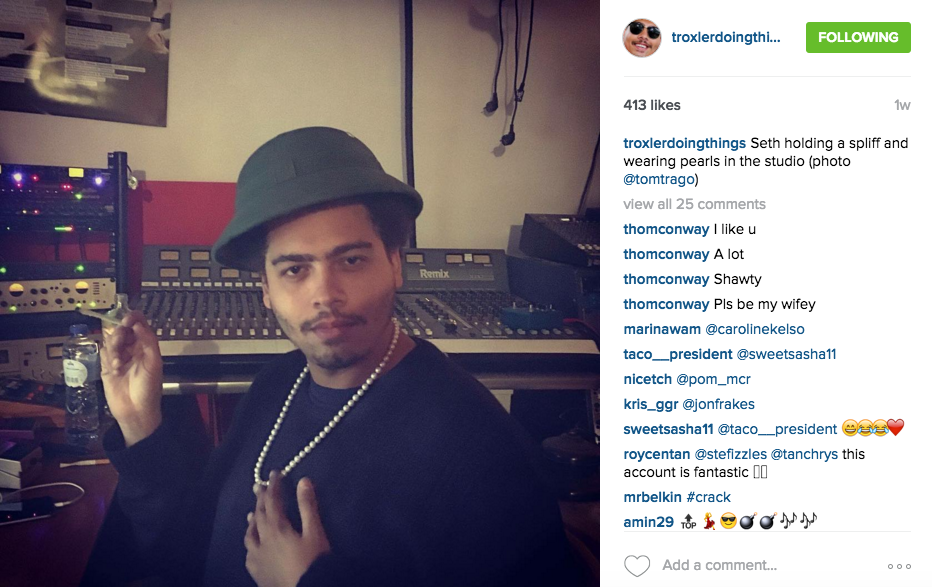 Proof that what some consider is a global scene is actually much smaller than we all think, it turns out that despite being born in a different continent than me, Dear Morni had gone to High School with a friend of mine in New York City, where he lives and is known as Austin Gebbia – his real name. We tried to meet last November at Time Warp in Brooklyn but alas technology (a.k.a. a dead phone battery) got in the way, delaying our talk until this week.

Alright, first things first, what does “Dear Morni” mean? Where does the name come from?

The name “Dear Morni” has no real meaning. My friend Sarah, who is notorious for her spelling errors, one day tweeted “Dear Morni” and that tweet somehow turned into a Twitter account after a few of our friends said I should start one. The first few tweets all began with “Dear Morni,” in letter format. I would sign them off as “- Sarah.”

That’s funny, I used to think your name was Morni and you were a girl. How did Dear Morni as a project start?

“Dear Morni” started in 2013 as a Twitter account. I didn’t know what I was doing with it but I knew I wanted to combine comedy and dance music. The first couple hundred tweets were very bizarre, which resulted in tons of DJs blocking me. I would tweet them the weirdest shit, so I don’t blame them. I recently tweeted Nina Kraviz saying, “At what age did your hymen pop?” She replied, “What’s a hymen?” I don’t know if she’s kidding or not. I really hope she is. Now when I tweet crazy things, I don’t look as psychotic since I have some followers and people know what to expect from me. Two years ago I made a shitty photo edit of Marco Carola, Carl Cox and Courteney Cox (who I always refer to as siblings separated at birth) sitting in a Toyota Corolla. Get it, Corolla. Ha ha! Everybody loved that, so I stuck with the visuals. It adds a layer to the jokes. After the Twitter account became popular, I started the Instagram page, which is by far my favorite.

Why did you choose underground house and techno as a sort of target? Do you feel laughing/satire is important in the scene?

I noticed everybody was taking themselves way too seriously. The things I would see every weekend in clubs baffled me. I had to joke about it. So many DJs put up a front as if they’re not human. Nobody is curing cancer or solving world hunger. It’s music and clubbing. These big DJs are touring the world, doing tons of drugs, screwing different women each night and getting paid shit tons of money for it. Some of them are real assholes. We should be constantly laughing at how crazy it all is. They need to be able to step back, take a joke and laugh at themselves. There is really so much to make fun of. 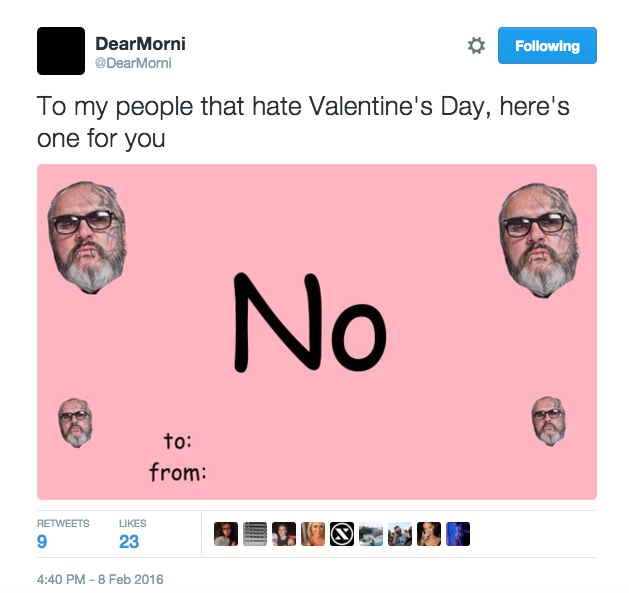 Do you or have you ever worked in the nightlife industry?

I had an internship at Pacha for a few months, which I didn’t love. It wasn’t what I thought it would be, didn’t take me anywhere or give me any useful connections. I was 17 at the time so I think everybody had a hard time taking me seriously. One day I worked with the head of VIP to call the bottle service clientele and give them the details for the upcoming weekend. She asked if I had ever been in the mezzanine [you have to be 21 to be in that section of Pacha] and I said “yes” because what, was she going to go and tell on me? Well, she went and did just that. Really? You’re that fucking bored with yourself? This one other girl in the office would always ask me to do things for her while she sat there on G-chat probably trying to coerce a tour manager into taking her to Nobu. Little shit like that really bothered me.

Are you selective about who you cover in your memes and jokes? Do you choose artists, clubs and festivals that you particularly dislike?

No. Everybody has been the center of a joke whether I personally like them, or not. My selection is pretty random and I want to cover everything. I love joking about festivals. If you really observe a music festival, it’s absolute recklessness. People are at their worst and it’s hysterical. I love seeing people from all walks of life come together to partake in debauchery. I’m constantly observing. I know girls who will snort coke off of a porta potty toilet seat at Ultra but won’t eat an apple unless it’s organic. People that go to BPM 75% of the time get diarrhea. Why would I spend 2,000 dollars to fly to Mexico and shit myself when I can do that in the comfort of my own home and spend only $4.00 on Taco Bell? I want to make it all funny. Sometimes people will get mad and what they fail to realize is that none of this is done with malice. If you get mad at a joke I make, you really need to re-evaluate your life.

You’ve received some negative feedbacks from industry members and DJs. How did it feel to receive that from artists that you possibly looked up to musically? Did that change your viewpoint of them?

Luckily most of the people I’ve looked up to musically have enjoyed it. If you don’t enjoy it, that’s fine. Humor is subjective.

If you were to meet one of these artists and they knew who you were, what would you tell them?

Let’s go get sushi and tattoos. Then dance all night.

The overwhelming majority, however, has seemed to understand your satire and get behind the jokes. Seth Troxler in particular has not only supported your work, and especially jokes about him, but has shared it and encouraged others to follow you. How did that relationship start? Were you friends before that or did the relationship start after?

Seth started following me on Twitter a little over a year ago and that’s when it all started. He’s the best. I always thought we’d get along since he’s funny, weird and doesn’t care. We share the same mentality. He’s artsy and quirky and is refreshingly real.

Are there any other artists whose approval/support for Dear Morni you particularly appreciate?

I appreciate anybody who enjoys it.

Was it your idea or his to start “Seth Troxler Doing Things”? Why did you choose Seth out of all artists?

That was my idea. I knew it would take off. It’s a knockoff of the Instagram page “Kanye Doing Things” by Elliot Tebele who does FuckJerry. Seth has tons of hilarious pictures, like him in a cape or him wearing lingerie at an after-party in Ibiza. He’s also always wearing different wigs. It’s a perfect match.

I love so many of them. Just recently I made a joke about Verboten, Soundcloud and SFX all in one since they’ve made headlines lately for similar reasons. “A music streaming service, a Brooklyn nightclub, and an event company walk into a bar. None of them can afford a drink.” The one I made on Martin Luther King Day where I said, “Lee Burridge should throw a party and call it ‘All Day I Have A Dream.” Also the one where I put a rose on Joris Voorn’s head and wrote “Every rose… Has its Voorn.” Right after somebody went overboard on the Mad Decent Boat Party, I tweeted “Mad Descent Boat Party.” There’s many favorites. 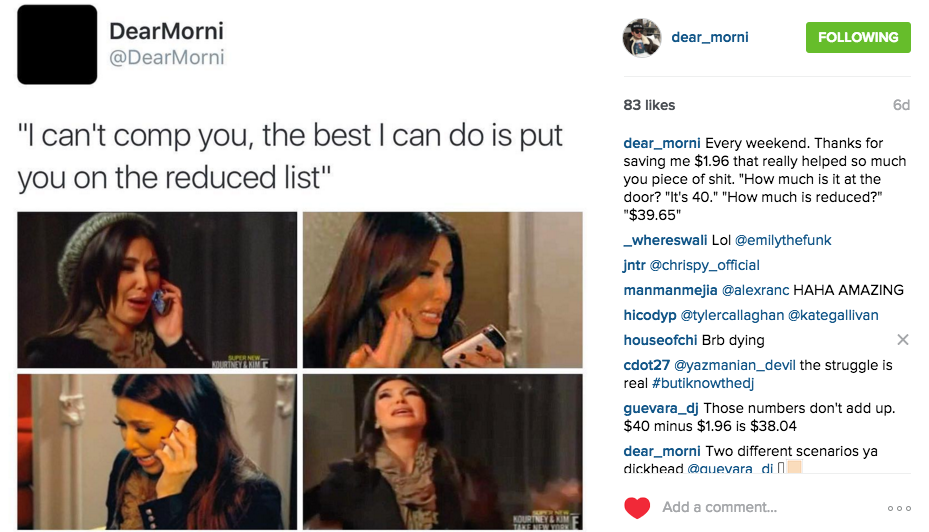 What is your aim/goal with Dear Morni?

I want to take over the world.

Alright, next up I will ask you some short, rapid questions. Just give me the first answer you think of. Worst NYC dance music venue?

Webster Hall is a botched abortion.

What gives you anxiety?

Definitely my vast collection of guns. 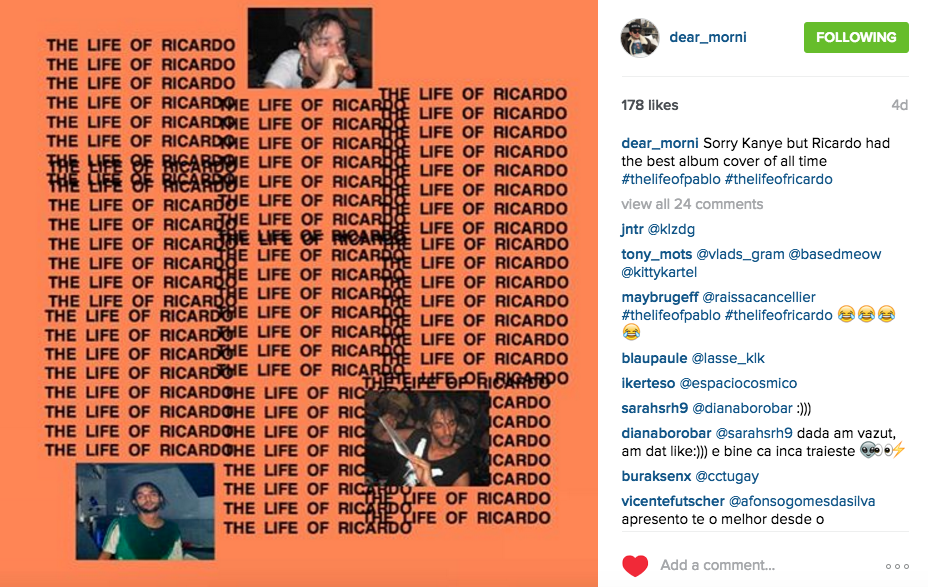 If you were to get a tattoo of a DJ, whom would you get?

I would get Nicole Moudaber’s lips tattooed on my right ass cheek.

You’re stuck on a deserted island and can only bring three things with you. What do you choose?

A stool and a noose. I don’t want to be stuck anywhere.

When the person at the door says, “We can’t find your name. Can you maybe text them?”

If you were to be reincarnated as a DJ, who would be the last person you’d want to be? 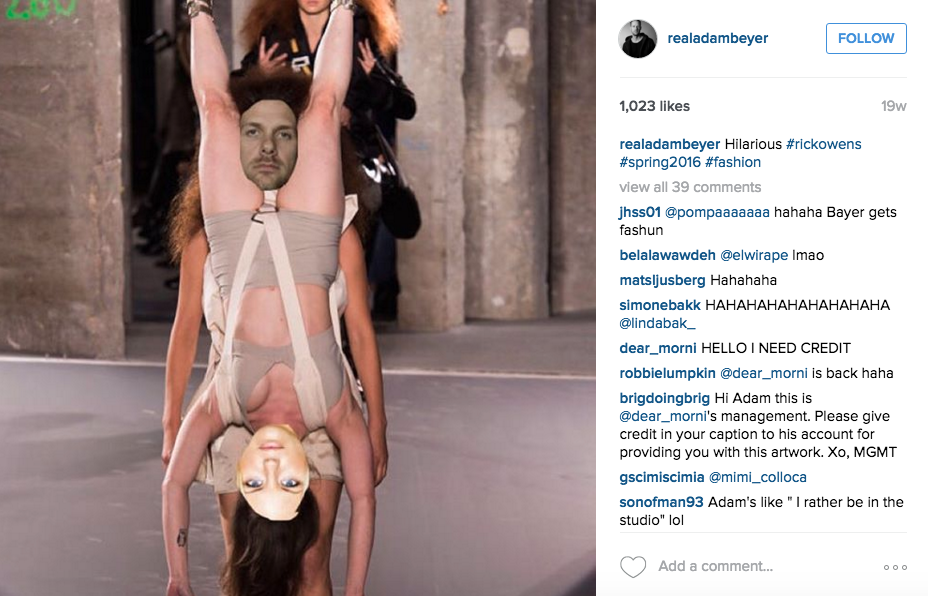 We could have gone on forever, me asking silly pointless questions and him finding a way to always tie it back to the very things in the nightlife circle that we can all find something to laugh about. There is no denying that Austin’s humor, like that of any comedian worth his/her trade, is subjective. It won’t please everyone and it has certainly gotten him his fare share of social media blocks from DJs, industry members and regular people alike. But in a scene where darkness and seriousness reign, where arrogance and elitism abound, and where focus can often be in the wrong place (see table service and generic cookie-cutter sets), Dear Morni provides a welcome escape through crude humor and light-hearted jokes.