To Dance or Not to Dance: DJs & Their Stage Presence 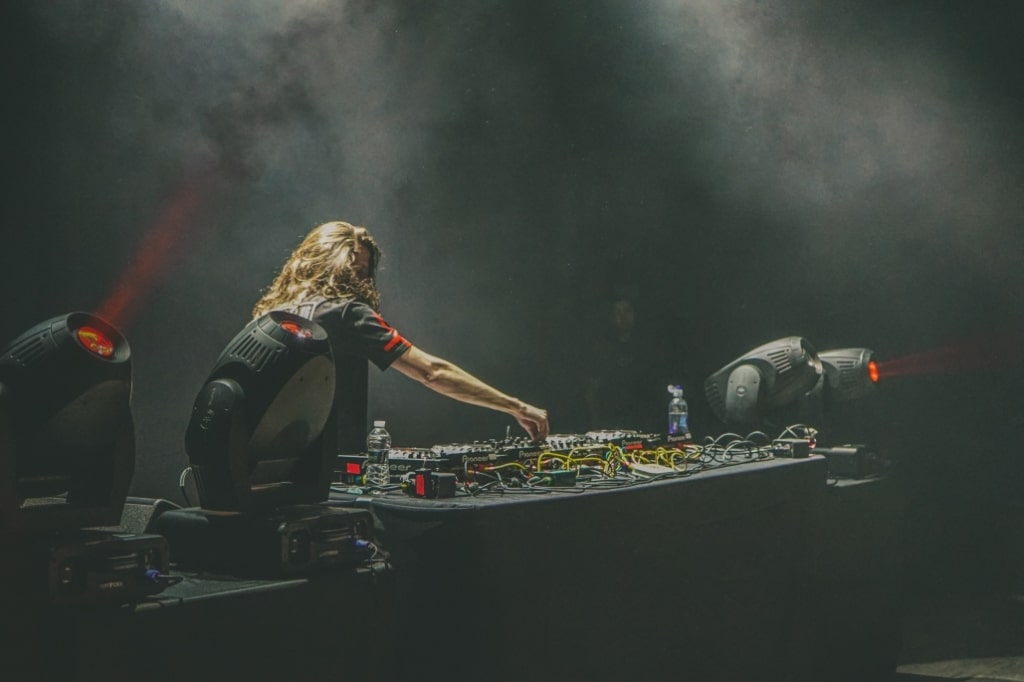 To Dance or Not to Dance: DJs & Their Stage Presence

When you go to a show, do you care what the DJ does onstage while performing? If a DJ doesn’t pump up the crowd, are they really doing their job? It’s an age-old question in the dance music scene and one that recently re-sparked a lively discussion thanks to social media. Dance music fans are split: what makes a good DJ, a good DJ? Is it just the music and technical skills alone? Do artists who put work into their live production also deserve accolades? Do DJs need an onstage persona or gimmick? Should they even be up there enjoying themselves or focused solely on curating the perfect set?

In a time where DJs like Fisher rise to massive popularity seemingly because of their on-stage persona, some dance music fans bemoan when showmanship and gimmicks appear to overtake the music. Once the DJ booth became the focal point of a rave by oftentimes being elevated front-and-center above the crowd, it’s hard not to pay attention to the entire performance. While a DJ is technically performing their job when they spin on the decks, where is the line drawn when it comes to added factors, such as onstage dancing, grooving and interesting production?

A recent Twitter thread decided to weigh on this debate, sparking a discussion within the community about the importance or non-importance of stage presence:

Hard disagree. I didn’t come to SEE a DJ perform. I came to hear them play. One of the coolest things ever was watching guys like DJ Dan completely destroy a dance floor and look cool and calm af while doing. The set is all that matters. pic.twitter.com/Npn8RLAsJ6

While some fans of the genre would clearly rather see DJs rely on the music and their mixing skills rather than an onstage person… but is there a middle ground? Many fans chimed in that it’s all about context. A dark warehouse is not about the stage presence but purely about the music, but the main stage of a festival is a completely different vibe and a DJ who is not connecting with the crowd just might lose them.

I think this view ignores a big component of human psychology. People mirror others emotions. If Hardwell played Ultra mainstage standing totally and unreactionary to the music it would really detract from the vibe in that context

Not to mention, human psychology can, and does, play a role. People feed off each other’s energies. A bored DJ might invoke a bored crowd. A DJ with an infectious aura will electrify the crowd, and so forth.

Nailed it. It’s completely about context. A main stage DJ needs to have high energy to match the excitement of the festival goers whereas an underground club show is more about music discovery which allows a DJ to be more understated.

Redditors who discussed this same topic in the past also had a wide array of responses. Some commenters just wanted to hear good music, while others acknowledged the psychological aspect to performing as well.

Does a DJ need to be having a good time on stage for the crowd to have a good time? Well, even the legendary Carl Cox thinks so:

When you see a DJ playing and not smiling, they’re not comfortable and overthinking what they’re doing.

Carl Cox in interview with 6AM

If you were asked to describe a serious DJ, who comes to mind?

Now, who did you think about… was it a man? The “serious” and “hard-working” labels for DJs who are more stoic often make the assumption the DJ is a man. A male DJ can appear detached onstage and be considered “putting in the work,” while a woman might come across as frigid and unenthused.

Twitter user @AerynPfaff brought up a salient point: a preference toward understated DJs is likely biased towards heterosexual cis men.

This is also another way queer DJs are gatekept out of straight spaces. We have different party cultures. Some of us don’t wear shirts in the rave, some of us have a unique sense of style and some straight DJ’s/bookers take anything they see as “flare” as a lack of seriousness.

Critiquing DJs who are enjoying themselves seeks to silence those most vulnerable in the community from expressing themselves fully. Especially in the techno scene, where conformity is often expected: techno fans must be serious, wear black, proper techno is only performed in warehouses.

When men perform without any antics such as dancing or smiling, they seem like they are putting in serious work when they DJ. Women in the dance music industry often have to work twice as hard to prove they deserve a seat at the table.  Femme-identifying DJs such as Nina Kraviz and Amelie Lens are known for their dancing and twirling on stage, but are also subject to sexist comments about taking the focus away from the music onto their own onstage personas. Members of the LGBTQ+ community are known for throwing lavish parties, such as the Defected Glitterbox imprint. DJs and fans alike are invited to dress up and have fun; it’s a party to unite people after all. Part of the appeal of these types of parties is the entire vibe of the party. Critiquing DJs who are enjoying themselves seeks to silence those most vulnerable in the community from expressing themselves fully. Especially in the techno scene, where conformity is often expected: techno fans must be serious, wear black, proper techno is only performed in warehouses, etc. Some techno fans are judged by others if they stray from these standards.

Location of the DJ Booth

Given the location that a DJ booth or a festival stage is generally at the front of the crowd these days, the attention tends to be on the artist. This move towards elevating the performers has only served to put the gaze (and pressure) on them to put on a performance. Some commenters brought up the fact raves used to be about the crowd and vibes.

Yet, some artists are actually wishing to change this paradigm to help curb the deification of DJs up in the booth. They want to encourage human connections within the crowd and take attention off the DJ. The dance music community is largely about connecting with others, after all.

“When I started All Day I Dream, I actually had this idea that I would take the focus off the DJ slightly. I’ve never really been one for wanting to stay in the DJ booth above people. I like ground-level… just you’re with people.”

Lee Burridge in interview with 6AM

So, what do you prefer?

With so many varied opinions, it begs the question: does this discussion about stage presence even matter? Some DJs are stoic; some like to dance. Some prefer to focus purely on the mixing, while others want to provide an entire experience for the crowd. Some DJs are in it to connect with the crowd and just have fun. There is an experience for every type of dance music fan. Ultimately, the discussion ended with a positive message on inclusivity: the dance music community should be one that welcomes DJs across the spectrum of stage presence. The community shouldn’t pressure those with more understated vibes to step out of their comfort zone if they’d rather just be up there mixing some tunes.

So if you’re a DJ, keep doing you. If you’re in the crowd, have fun any way you see fit. The dancefloor is there to unite us; not divide us.