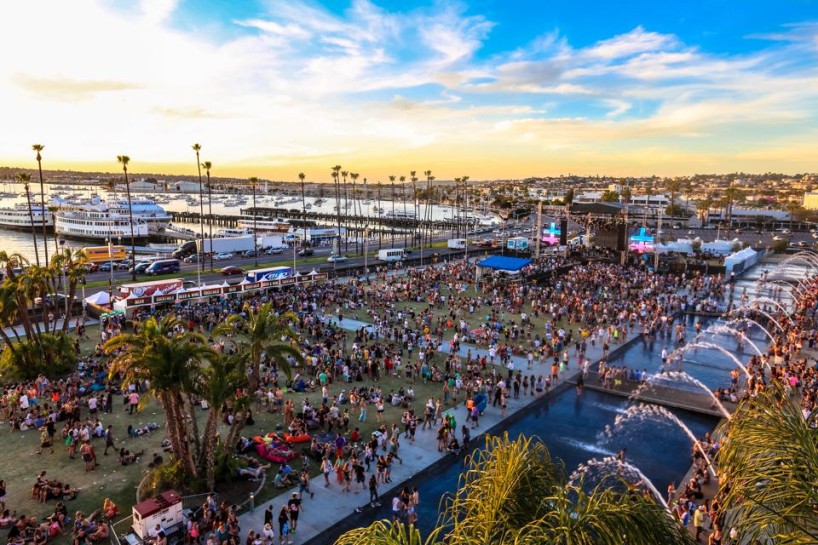 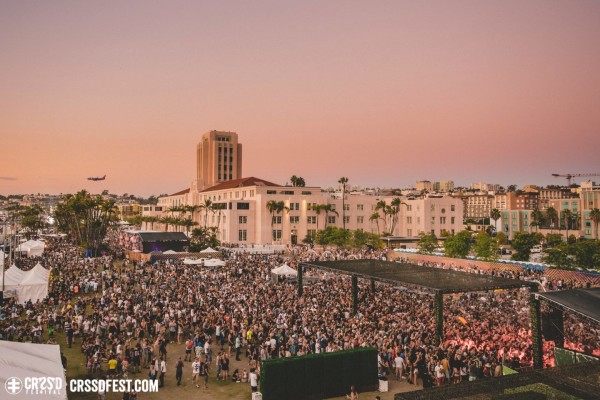 Admittedly, it had been a while since my last festival escapade. Myself and others were eagerly anticipating One Tribe, but after it’s unfortunate cancellation we looked to other options to end the 2015 festival season. After hearing relatively positive sentiments about CRSSD Festival in the spring we decided to rally the troops and made our way down to San Diego for the weekend.

Upon entering Waterfront Park on Saturday October 10th, we heard a light hearted mix of LIPPS INC – Funkytown being dropped by none other than the rising talent, Justin Jay, and it was a clear sign of great times to be had. Playing to a lively San Diego crowd, Justin Jay dropped everything from massive 909 based techno, hip hop, some recent releases, and featured special vocal and live guitar appearances from his friends, Josh Taylor and Benny Bridges, respectively. 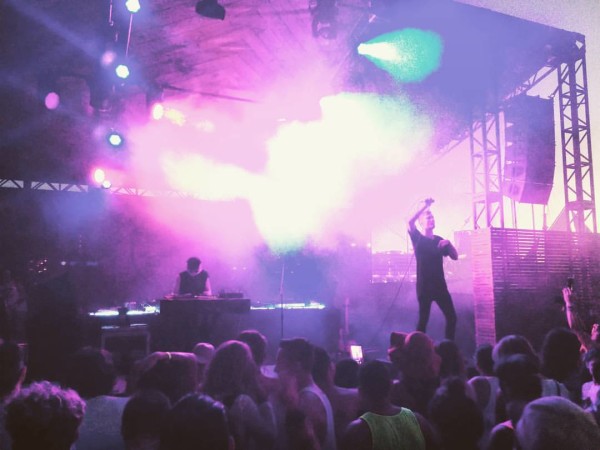 While this was a fun set to start our weekend, there was a general consensus among us regarding the sound, or lack thereof, on the City Steps Stage. Much to our disappointment, the sound never reached the optimal level for dance music, and it is believed that some of the sound became distorted after bass heavy sets earlier in the afternoon. With this in mind, it was about time for a margarita and to carry on with a proper set from Detroit Swindle. It was everything to expect from the duo, and the sunset transition into Bob Moses’ live set was one of class. Bob Moses swiftly mixed in hits such as Far From the Tree and All I Want, and was an enjoyable moment for the most part, but distorted sound and muddy bass limited the possibilities for the full sonic journey.

Despite a relatively lackluster set from Bob Moses, the next two sets we witnessed remained the best of the weekend, bar none. As the sun just began to fade away under the Pacific Ocean, Bonobo put on a master class for festival DJ sets dropping an eclectic range of tracks such as Nuits Sonores, Knowing We’ll Be Here (KINK Remix), Piano Weapon by Doorly, Thirstin by Jack J (so random, yet so perfect), as well as his own tracks Flashlight and Cirrus. I’d be comfortable giving Bonobo the accolade for set of the festival, but then Jamie XX happened. 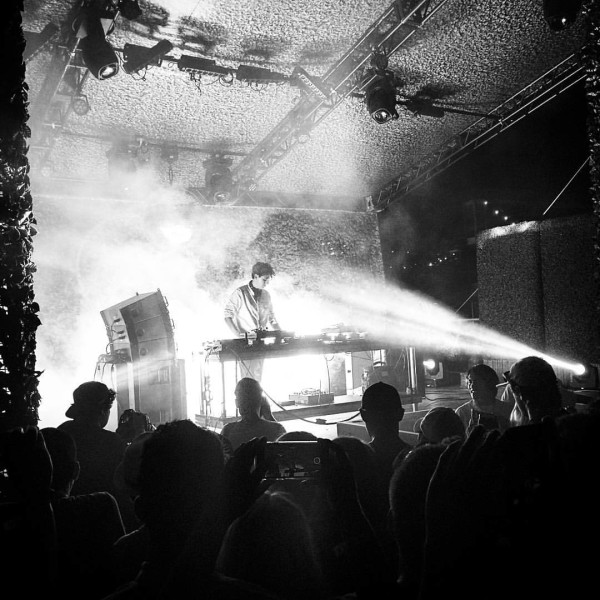 Heading over to The Palms Stage, Jamie XX graced the stage amidst a cloud of smoke and proceeded to drop heavy breaks tracks to set the mood, while proceeding to mind tantalizing acid terrace thumpers with some of the most wicked clave grooves we’ve ever heard. I’d also like to take this moment to give a special shout out to the guardian angels of the dancefloor, who would sporadically come raging through the crowd with their fans cooling off the weary ravers. On behalf of the groovers, I thank you, fan wielding savior.

With a giant disco ball as the backdrop to the stage, it was expected that we’d hear some great disco tracks. It was a spotty transition into the disco segment of his set, but the vibe was infectious and we’re not gonna hound the lad for one so so mix. He proceeded to end his set on music predominately from his recent album, In Colour, dropping tracks such as Obvs, Gosh, and Girl. A satisfying way to end Day 1 at CRSSD.

Looking back on Day 1, everything seemed to go smooth. Entrance was quick and painless, the vibe remained intact all day (something we were worried about considering the vast variety of talent on the lineup), and the music was world class. It was also especially satisfying to have some breathing room on the dance floor, and being able to navigate through the crowd with ease. As far as the venue, not much changed set-up wise for the Fall installment of CRSSD either. Some of the stages were rearranged in different directions, and City Steps added a canopy this time around, but overall nothing major to affect the event in a positive or negative way.

Where Day 1 at CRSSD was fun, festive, and care-free, Day 2 was serious techno business. Sporting a “No Bad Vibes” shirt and drinking giant steins, Andhim laid into massive tech house groovers such as Butch’s recent release, Dope, and began laying the foundation for the rest of the City Steps stage. We were locked in an absolute groove, but after an obnoxiously drunk sorority clique spilled beer over us it was time to ditch the stage and catch the end of Bicep. No regrets there as the duo hammered out tracks such as DJ Koze’s remix of Bad Kingdom, UK grooves, and eventually ending on their classic track, Just. The next part is where CRSSD could use some programming help. After such a nice thirty minutes of Bicep, the next act, Jai Wolf, stepped up to deliver commercial tropical house and pop-trap. Needless to say we weren’t feeling it. Nothing against Jai Wolf either – to each their own, but it just leaves an incredibly awkward vibe, and one that could easily be avoided when creating the set times. But hey, at least City Steps was only a few strides away. 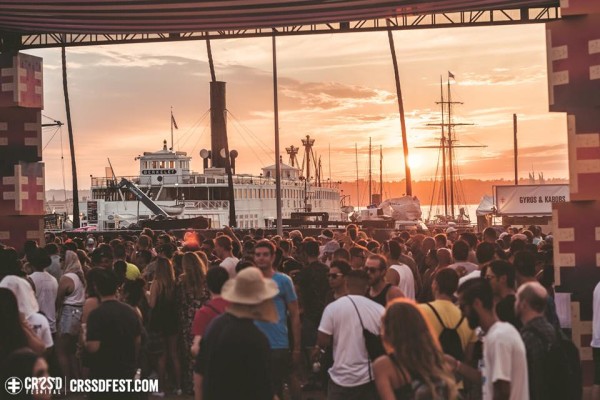 Eager to get back to the groove, we trotted over to catch Claptone only to be disappointed by commercial vocals over decent beats. Luckily, the masked DJ picked up the pace and groove leading into DJ Tennis who, as expected, brought some seriously trippy techno to the table. Tracks such as Trentmoller’s Take Me Into Your Skin stand out, but it was hard not to crack a huge smile as the bass plucks of Bob Marley’s Could You Be Loved echoed through the open air atmosphere of Waterfront Park. With a clear blue and pink sky overhead and ships in the harbor, it was one of the better moments of the festival. 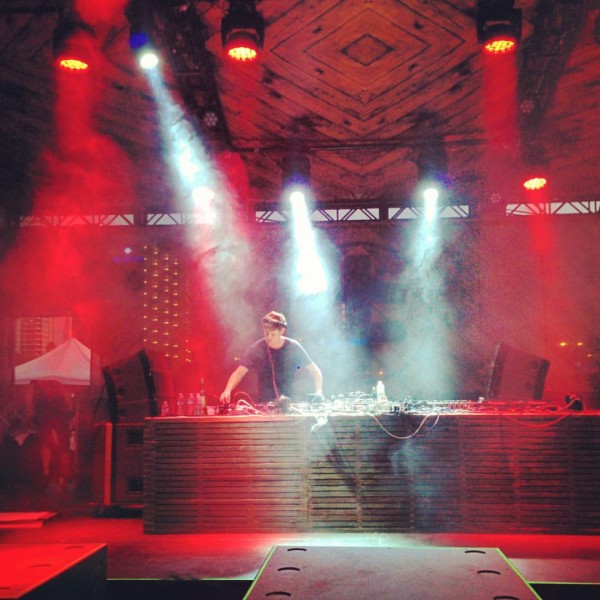 The rest of the night favored the techno vikings as Mano Le Tough, Ben Klock, and Maya Jane Coles ripped into forceful techno grooves that undoubtedly slapped a few people in the face. In a feeble attempt to end our night on a peaceful note with Nicolas Jaar, the groove at the City Steps stage was inescapable. Myself and a few friends enjoyed thirty minutes or so of Jaar before agreeing to end with Maya Jane Coles. There were no bad options to end Day 2 at CRSSD. If you wanted a more eclectic music experience then Nicolas Jaar was your man. If you wanted to test out some of your weirder and energetic dance moves then Maya was the option for you. We went with the latter, and don’t necessarily regret it.

With CRSSD ending at 10:00 PM we were naturally eager to keep our night going. Thanks to San Diego influencers Dadon and Jimbo James, it was off to a very intimate after party with DJ Tennis and Mano le Tough – a highlight of the weekend., and that’s about all we’re going to say about that one.

Overall, CRSSD met expectations. With a great group of friends, old and new, the event seemed to build off their previous edition. For those in search of a fun and festive experience in Southern California, CRSSD should definitely be in consideration for next year.