The Correlation Between Social Media and Record Sales 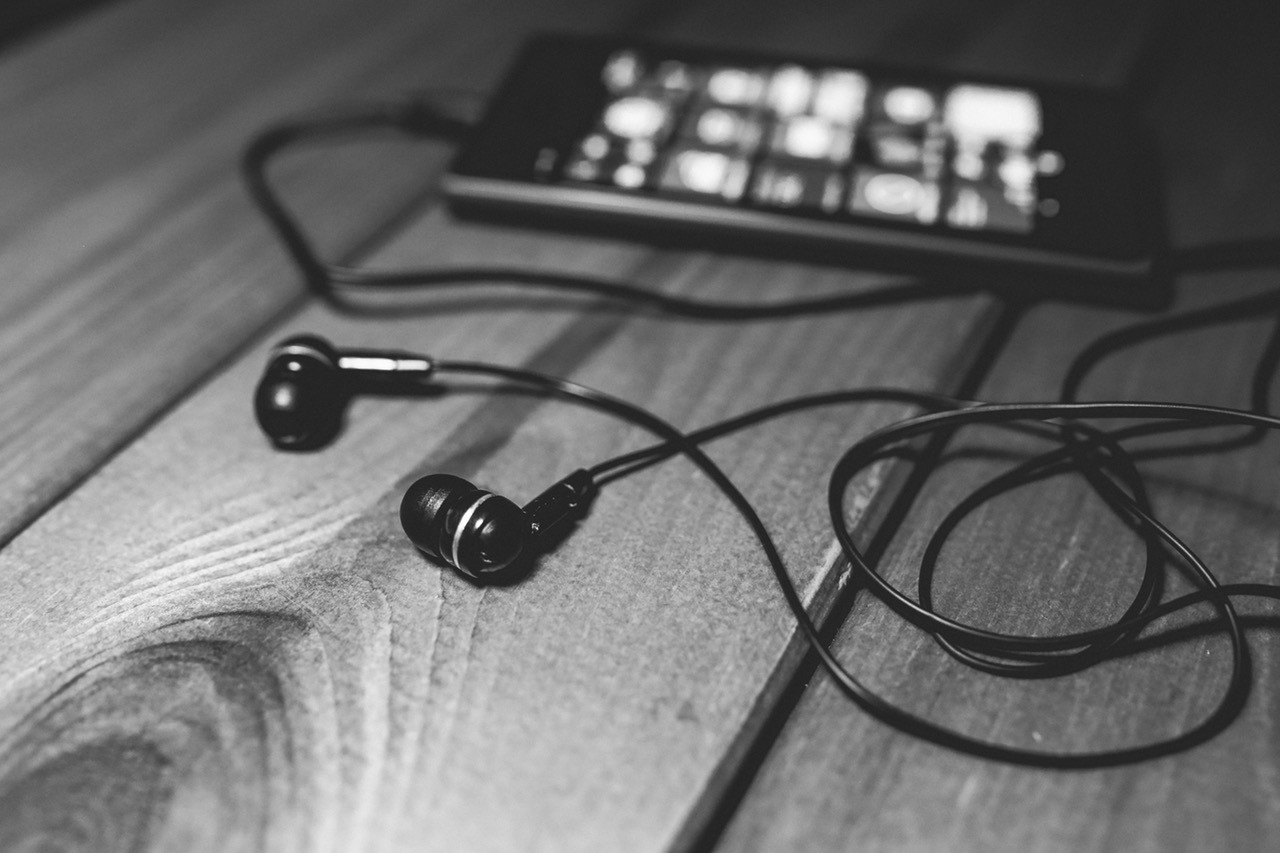 The Correlation Between Social Media and Record Sales

Before the turn of the century, when an artist recorded a song, you had to buy the music before you got to listen to it at will. The more record sales, the more successful the artist and the music was. People loved buying records; there was the vinyl LP, the cassette tape, the compact-disc and then the evolution of mp3s. While before you have to have a special player to hear the record you bought, today things are very different. Now you can just log on to social media or streaming sites and listen to the newest tunes.

But is there a connection between social media popularity and a track or album’s final sales? Check out the following graphs from hypebot.com to see the correlation between the two works: 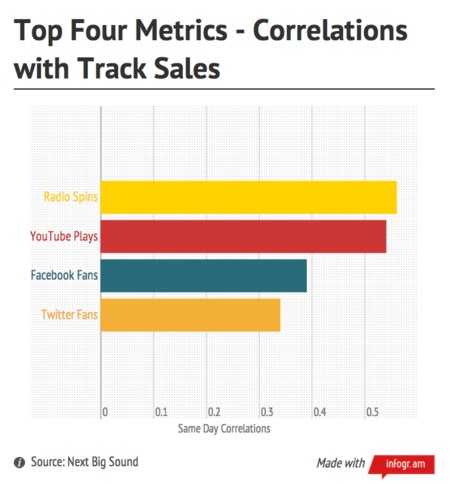 Based on the chart above, the more radio spins the more track sales. Social media lags behind the metrics, but it looks like YouTube plays are important. This just shows that people will buy a single they hear more often and without searching for it. A strong video for the single is also important to viewers. A catchy video prompts buyers to purchase a track, and with videos now playing an important role within Facebook marketing this becomes a key tool to promote an artist’s upcoming release. 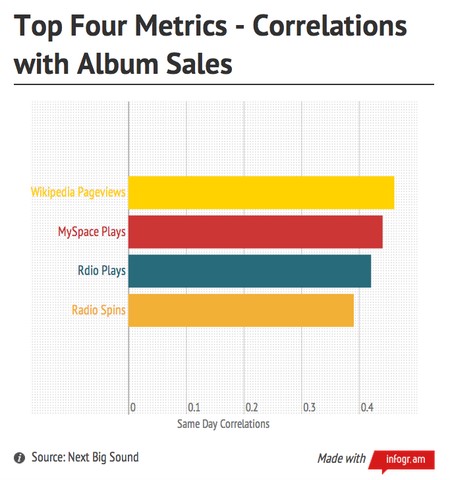 Social media hits in the week leading up to an album release and the album’s first week sales look to be pivotal. The more searches on Wikipedia and MySpace equal the more album sales. Radio plays and radio spins are behind. This shows that consumers want to know more about an album before they buy it. They need to see the track list and the album art and maybe a sample single. This is where social media plays a big part in album sales. 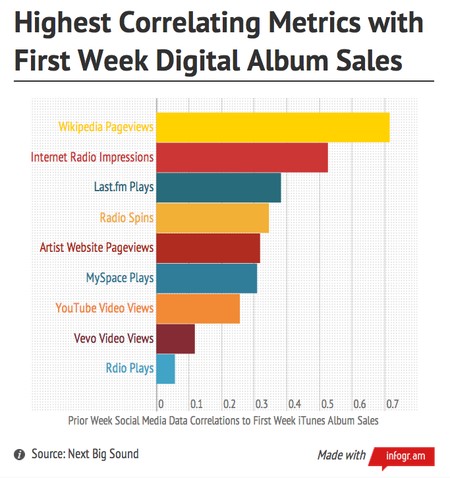 First-week digital album sales increase with Wikipedia hits as previously mentioned.  Internet radio sites (ex: Pandora, Rhapsody, and Sirius) are also a big motivator based on the graph. The number of hours a song plays on the broadcast radio rank dead last in the long list of motivating factors to buy on iTunes. 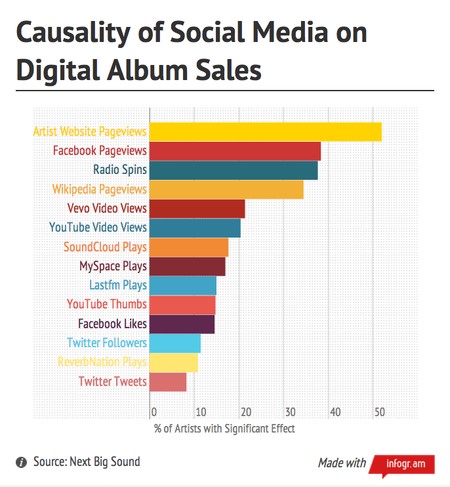 According to hypebot.com, around 50% of the artists they interviewed said they take website hits and social media engagement into account when predicting their album sales. Therefore we can say that social media plays a big role in future album sales. The artist’s website and their Facebook page are the most responsible avenues for generating sales. 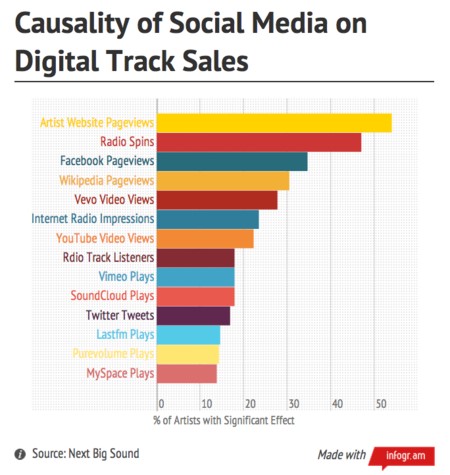 On track sales however, it’s the artist’s website and radio plays that are the biggest factors in boosting sales. These two avenues are the easiest places to listen to the track or EP they are interested in buying. This again shows how valuable a tool social media is in terms of sales.

We now have calculable proof that social media can affect album or track sales.  With the internet being right at our fingertips, buyers now want to learn more about the music before they buy. They might check out the artist’s website or Facebook first or listen to the song on YouTube before making the transition to purchasing it for themselves. They might check the history of the artist on Wikipedia first to familiarize themselves with the music and the producer. This information makes it easier for the producers and agents to sell albums and tracks. By strategizing being the artist’s social media platforms, the engagement with their fans and more, they can change marketing tactics to pull in more sales, pivoting where necessary depending on the trends they spot on social media. It is safe to say, based on this analysis, that having a strong social media presence, which is also valid for the record label releasing the material, has direct correlation to track, EP and album sales.

Smart artist management, publicists and artists themselves are able to tap on today’s social media boom and to use it to their advantage, capitalizing on the interconnected global world we live in to reach more and more ears every day. We see this trend more and more in today’s electronic music scene, with artists using videos, SoundCloud previews, snippets and premieres and other tactics on a regular basis to generate interest on their music ahead of the scheduled release day.

We have in the past looked at why sheer talent isn’t enough to make it big as a producer and/or DJ in today’s industry, with social media and general marketing playing a large role in getting the music to the right ears and enough ears at that. Take a look at our analysis here for full info.

If you found this article interesting, sign up for our newsletter to learn more and to stay up to date with 6AM’s news and features on the world of electronic music.[brew_cta id=”5″]