The Connection Between Anime, Trance & Techno 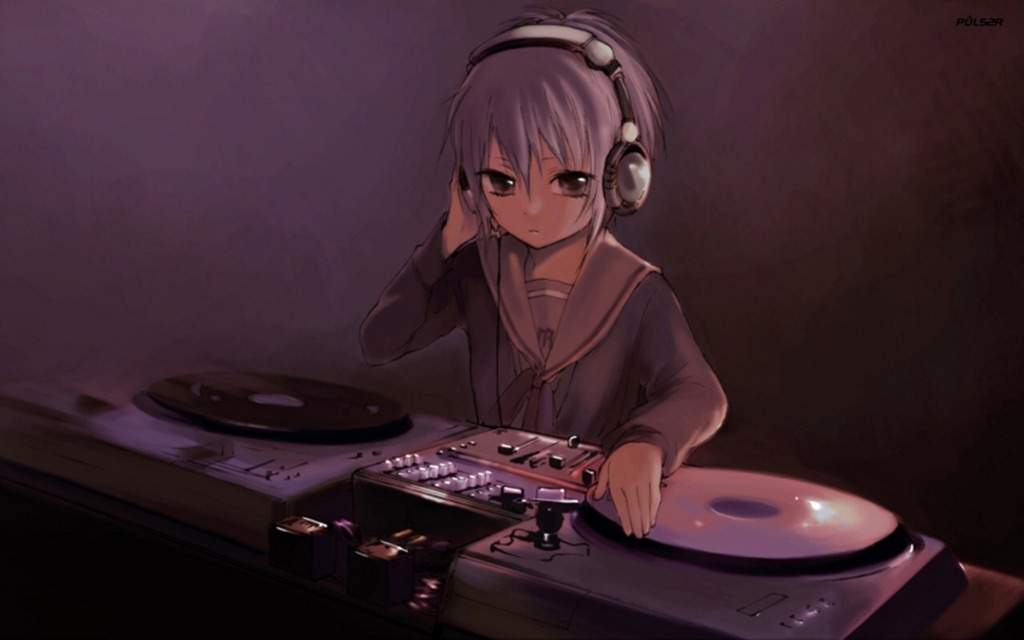 The Connection Between Anime, Trance & Techno

The overall growth that’s apparent from 2019 up until now showcases that anime has truly made itself known as a household name. Along the way, anime, trance and techno have “crossed wires” so to speak, but in a good way.

2019 saw an increase in people watching anime. Netflix reported that households streaming anime had grown a whopping 50 percent and more than 100 million households watching at least one anime title on its platform. Crunchyroll, the largest streaming anime platform, reported it had reached three million subscribers in July 2020, and then six months after, reached four million subscribers. This represents an overall growth of 33 percent in six months.

Like trying to find a needle in a haystack, it is difficult to trace the first anime that became affiliated with techno Synth-pop, euro-beats, dance, techno-pop, and more eventually started to have an influence on 90s anime including Sailor Moon, Pokémon, Slayers, and Angelic Layer. These and other shows have featured techno as staple music in their series. Some shows even include techno DJs as characters.

Read Next: Attack on Titan & Techno Find Their Way to Matt Altman & ALT 002

The 2003 show, TEXHNOLYZE  featured Junor Reactor, a psytrance and electronica artist for their series. The show opened with “Guardian Angel” included “Razor Back” in an episode. The prominent anime, Ghost in the Shell: Stand Alone Complex had ORIGA sing the show’s intro, titled, “Inner Universe.” Lastly, the show Initial D had popular hyper-trance, euro-beat tracks included within the show such as, “Express love,” by MEGA NRG MAN, “The Race is Over,” by Dave Rodgers, and “Max Power,” by Dr. Love featuring D-Essex. 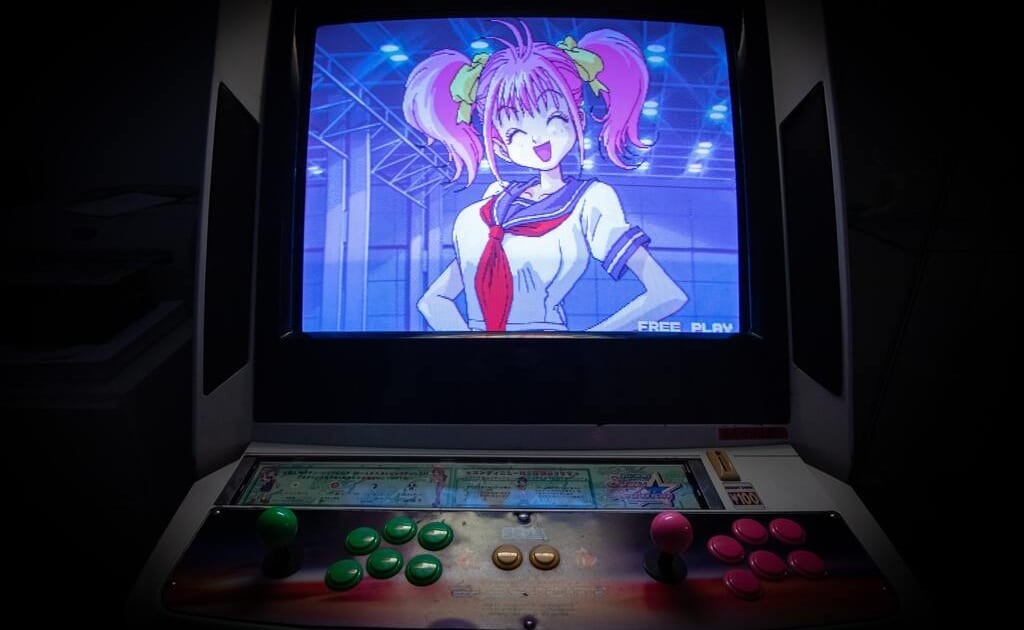 Following the 2000s, Night-core, a sub-genre of Eurodance, started to make headway within the anime community. To better understand Night-core, it is the process of increasing the pitch and speed of any song, and the vocals sound similar to a chipmunk. Most commonly, Night-core remixes are edited into EDM songs, though, there are many cases where Night-core has been remixed into hip-hop and pop tracks as well. As for the name itself, Night-core is derived from the Norwegian duo DJ TNT (Thomas S. Nilsen) and DJ SOS (Steffen Ojala Søderholm) who released pitch-shifted versions of trance and Eurodance songs.

Night-core is also commonly associated and accompanied with anime, as there are many YouTube thumbnails of Night-core remixes containing anime characters and art. The subgenre is not a thing of the past. Even though it started garnering interest in 2007/2008, to this day, it still has a devoted fan base with thousands of fans creating and uploading videos and songs into a Night-core remix.

Around the same time that Night-core was building a cult-following, another music flare was on the rise to stardom; this time, however, it wasn’t a genre but an artist: Hatsune Miku. Although she is objectively a software synthesizer program that was developed in Japan, her character represents so much more to her loyal fan base. Due to her technological availability across PC and MacOS platforms, it wasn’t difficult for her program to pick up much traction, but how she picked up and continued her longevity is the beauty, especially within the techno and electronica scene.

We know that her software is available for computers, but to clarify deeply, who and what is Hatsune Miku? Simply, her character name perfectly translates and matches her role:

As for the “what” in the aspects of her program, she uses singing synthesizing technologies and editors. In other words, this 16-year-old girl with long, turquoise twin-tails helps you create music. As for her popularity, she has been a global sensation, despite not actually being a real human. Various hits of hers became sensations on Youtube including “World is Mine,” racking in 25 million views in 2008, and “Po Pi Po” receiving 15 million views in 2009.

In December 2020, Hatsune Miku was a featured artist on the alternative, hip-hop artist Ashniiko’s song, “Daisy 2.0”

Since 2008, Hatsune Miku has been on a steady climb not only from accumulating millions of views, buys, and fans from her musical program, but her empire has also expanded towards her own anime expo and even live concerts — yes, live concerts. Her 2020 concert Crypton Future Media continues marketing Hatsune Miku to the highest degree.

Although the user can create any kind of music genre with Hatsune Miku’s program, most users have opted to stay in the realm of electronic music, particularly with techno. Perhaps it’s because of her high-pitched, melodic, and robotic voice that adds to this automatic choice from the user, but the majority of her songs can easily be classified as electro-pop, electro-dance, dance-pop, and techno-oriented.

The overall beauty of her program is when it comes to techno and those that have an interest in DJing is that she allows users to not only synthesize their own songs as a 3D character but to also experiment their songs into remixes with other artists/DJs — thus leading down the rabbit hole of various creators customizing her songs into techno mixes.

Whether it be within the series, having a connection to fan art, or to the characters,  techno and the subgenres of techno all share a connection to anime. It could perhaps all boil down to a simple fact: escapism; anime and techno both embody the term. Cartoons allow a watcher to see through a world of infinite possibilities. Tie that in with a hypnotic, techno track…well let’s just say that such a duo is a great way to feed into the wonders of fantasy.

Nowadays, where everyone is grappling toward a fantasy, it makes sense why anime has been on the rise in recent pop culture, with celebrities, and audiences worldwide.

As for what techno and anime have birthed in process of crossing with one another, it seems that if anything else, both have created a secure community. Even now, anime conventions dedicate different parts of their venues that relate to different styles of music such as gaming music, mainstream,  Japanese, and in this case, techno. A great example is the Los Angeles anime convention: AX Dance. The convention is represented as a “cross-section of EDM and anime fandom“.

AX Dance focuses on headlining local and international DJs that all come together. For AX Dance, all the DJs play every major popular genre from J-pop to House music, as well as remixes of anime songs.

AX Dance: A Past Look of The DJ Line Up 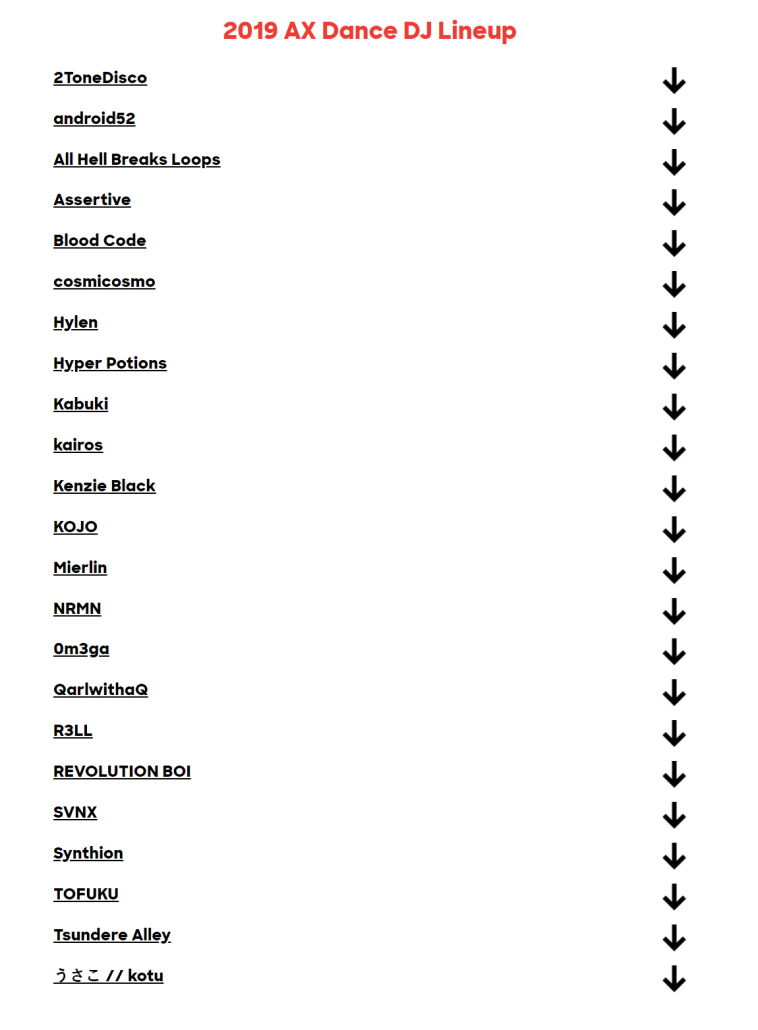 As for Hatsune Miku? She’ll continue to revolutionize the techno community as well as she is a bridge between the worlds of techno and anime. As long as her fans continue to create and remix techno and electronica music, the synthesized idol will continue to have longevity.