Colorado Might Be the Next State to Decriminalize “Magic” Mushrooms 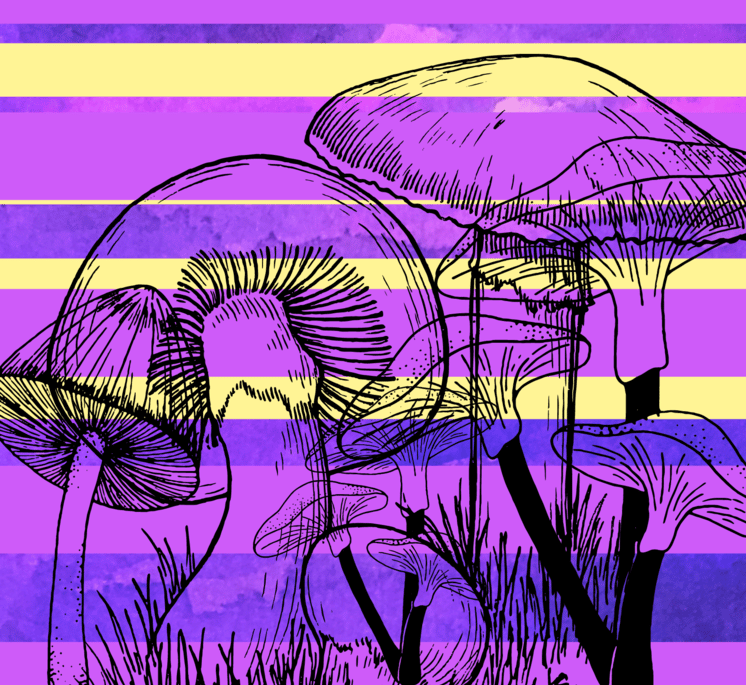 Colorado Might Be the Next State to Decriminalize “Magic” Mushrooms

It wasn’t just the painful tumors or medication that made Alan Floyd sick. It was the idea that death could come at any time, a brutal fact of his condition that came to dominate his days and grew into night terrors during his sleep.

“It was this monstrous, impending doom of death hanging over me,” Floyd said.

But Floyd found a way to interrupt the cycle of rumination and fear by experimenting with “magic” mushrooms. He’s one of many patients and spiritual seekers in Colorado who have sought healing and relief from mushrooms and other psychedelic substances, despite a federal prohibition.

Although recent research showing the healing potential of these drugs has spurred renewed interest, mushrooms and naturally derived psychedelics like mescaline, ibogaine, and dimethyltryptamine, or DMT, have been used by people for centuries. It’s only in the past 50 years that they were considered illegal. 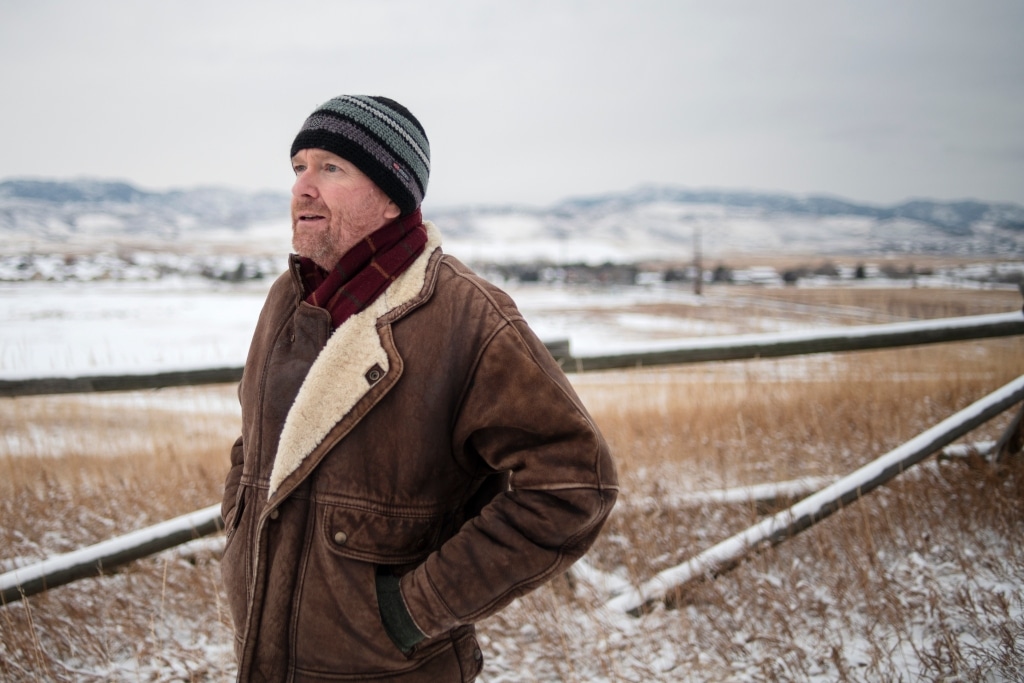 Now advocates are hoping Colorado will join Denver and a growing number of cities and states that are decriminalizing mushrooms and other psychedelics. They’re working on initiatives that, if approved for the November ballot, would ask voters to eliminate criminal penalties under state law for possession, use, and cultivation of certain psychedelic substances.

The statewide effort comes after psychedelic drug advocates successfully passed a 2019 Denver measure that decriminalized adult possession and use of psilocybin, the psychoactive substance in so-called magic mushrooms, and made it the lowest priority for local law enforcement. But disagreements are forming already among advocates backing the effort, who remain divided over what statewide decriminalization should entail.

Kevin Matthews, a proponent of Denver’s 2019 decriminalization measure, is pushing initiatives to create a regulatory system that would allow people 21 and older to seek psychedelic therapy at state-sanctioned centers.

“They’re not a panacea,” Matthews said. “But I think we have an opportunity to powerfully treat a lot of mental health conditions.”

They’re not a panacea, but I think we have an opportunity to powerfully treat a lot of mental health conditions.

Four initiatives have been approved by the state Title Board, and advocates are debating which one to petition onto the statewide ballot in November. Another camp of activists has put forward their own measure, which is still under review, that would decriminalize mushrooms and three other psychedelics without calling for further state regulations.

Read Next: Max Gardner Brings Psychedelic Sonics With “This Is A Test” – Peer

The move to decriminalize magic mushrooms in Colorado comes as Denver and jurisdictions across the U.S. have enacted laws to legalize the use of psychedelic substances.

Shannon Hughes, an associate professor of social work at Colorado State University in Fort Collins, said that, outside of studies and clinical trials, underground guides have long been helping people access psychedelics to treat health issues, explore their spirituality and experiment recreationally. Hughes serves on the board of a Colorado group that promotes the safe exploration of psychedelics.

“There are folks who have been doing this work for a very long time, but because it’s underground, they can’t really talk about their experience without fear of criminal risk,” Hughes said. “All we get access to is how it’s getting medicalized.”

There are folks who have been doing this work for a very long time, but because it’s underground, they can’t really talk about their experience without fear of criminal risk. 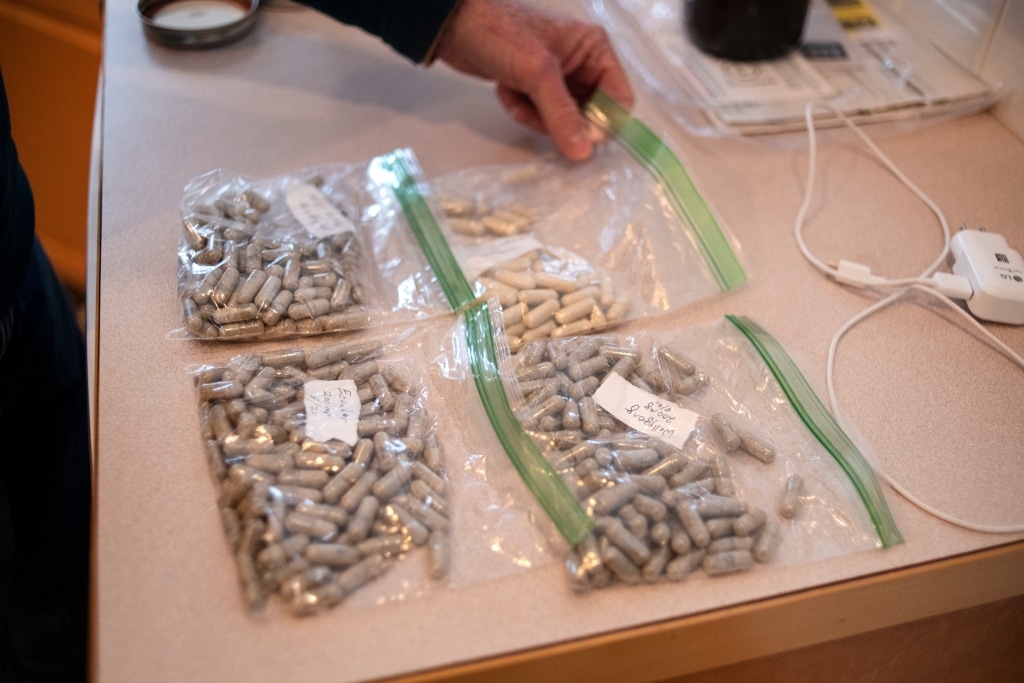 In the 14 years since doctors told Floyd that he was unlikely to survive the large tumors growing on his spine, some of which divide his spinal column and are too dangerous to remove, he tried 16 psychiatric drugs and opioid painkillers to treat his pain and distress.

The now 57-year-old Colorado resident credits illicit psychedelics like mushrooms and LSD for showing him how to cope with his illness. The Colorado Sun is using a pseudonym for Floyd because possession and use of psilocybin and other psychedelic substances remain illegal under federal law.

“It helps me to look at those thoughts in the face and realize, that’s serving me no purpose at all,” Floyd said.

Recent scientific studies and clinical trials are showing psilocybin and other psychedelics have the potential to treat serious depression, end-of-life anxiety, post-traumatic stress disorder, and other issues.

Psilocybin and other psychedelics were previously studied in the 1950s and 1960s as treatments for alcoholism and other health issues. But as recreational use and stigma surrounding the substances grew, several states banned their use, eventually culminating with the Controlled Substances Act in 1971.

In addition to psilocybin, Colorado advocates are working to decriminalize three other psychedelics derived from plants: ibogaine, mescaline (which is found in peyote), and DMT. All are still considered Schedule I drugs, the strictest federal designation, meaning they are considered by the government to have a high potential for abuse and no currently accepted medical use in treatment.

But that classification has also hampered widespread medical research, meaning researchers and the public have a limited glimpse into the benefits and other effects of these substances.

Researchers at Johns Hopkins University, however, have argued for rescheduling psilocybin as a Schedule IV drug, alongside substances like prescription sleep aids, if it clears additional clinical trials. They cite studies of animals and people that suggest psilocybin has low abuse potential and there is no known overdose level and advocate for using psilocybin in clinical settings. The other psychedelic substances included in the initiatives are also being studied for their health benefits, although they haven’t received the same attention.

Ibogaine, which is derived from iboga, a plant mostly found in Africa, is being studied for the potential to help people with addiction cope with withdrawal. Mescaline, the main psychoactive substance found in peyote, has been used for centuries by ancient peoples and Native American nations. DMT, which is found in certain plants and animals, is a powerful and short-acting psychedelic that researchers believe can shed light on cognitive neuroscience research.

Studies also suggest that people on certain antidepressants, who have heart problems, or with schizophrenia or bipolar disorder may be at increased risk by using psychedelics.

The Psychedelic Community is Divided

There’s growing political momentum across the U.S. to support the legalization of psychedelics, but Colorado advocates are divided over how, and to what degree, those substances should be regulated.

Four of the five initiatives submitted to the state were brought by a local coalition backed by the national New Approach PAC, which has funded successful cannabis and psychedelic legalization campaigns nationwide. Its major donors include Dr. Bronner’s Magic Soaps, a California-based company.

The group’s proposals generally call for the state to set up a regulatory framework where people can seek psychedelic-assisted therapy through state-licensed “healing centers” or at home from a licensed facilitator. Two of the measures would also decriminalize the personal possession, cultivation, and use of those substances, as well as gifting to adults over 21. 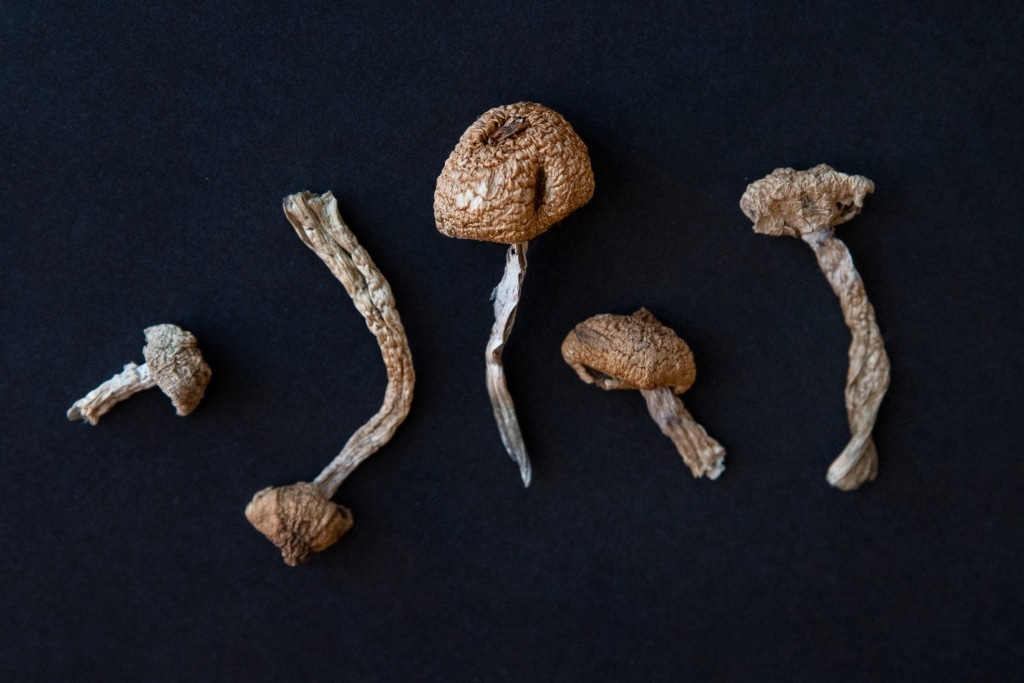 Earlier drafts, however, limit legal possession to 4 grams and would create fines for possession above that limit. Matthews said the regulatory approach would make it easier for most people to access psychedelics in a safe way.

“Most people who would want to try natural medicines as an alternative treatment are more likely going to want to see a person who is trained and licensed,” he said.

Another group of advocates is wary. While it might be politically viable to frame psychedelics as a treatment for serious mental health issues, that doesn’t account for the underground practitioners who have used psychedelics for decades and generations, said Nicole Foerster, an advocate with Decriminalize Nature Boulder.

Foerster is also concerned the “healing center” model would place legal emphasis on creating a medical system for psychedelic use while leaving out individuals and people of color who have sought out psychedelics because of a lack of access and other failures of the mental health system.

“Sometimes just connecting to spirit and the divine is healing. In the same way, people are healing treatment-resistant depression, they’re using it to become more creative,” Foerster said, adding that many people may not have a diagnosis but could still benefit from use.  Foerster and other activists have submitted a pending one-page initiative removing any criminal penalties under state law for possession, use, cultivation, or gifting of psilocybin and other plant-derived psychedelics by people 21 and older.

Underground guides and users can still define their own relationships to psychedelics under the most recent draft initiatives, Matthews said, pointing to language that not only allows for personal use and cultivation but also use in group settings. The state would also spend months hammering out details in official rulemaking.

“It’s disingenuous to think that decriminalizing-only is the best way to move forward,” Matthews said.

It’s disingenuous to think that decriminalizing-only is the best way to move forward.

As psychedelics draw more mainstream interest, many advocates caution they are not for everyone, and shouldn’t be viewed as a miracle drug.

Using psychedelics intentionally — surrounding oneself with the right people, creating boundaries, and setting one’s mindset beforehand — is also key to a therapeutic experience, said Devin, a licensed professional therapist in northern Colorado who also works as an underground mushroom guide.

Devin, which is a pseudonym, agreed to speak with The Sun on condition of anonymity because of concerns about losing her license. She points to a decade of recreational experiences in her 20s with drugs like LSD, ketamine, MDMA, and mushrooms. Many of those were positive and transformational. But others felt unhealthy, and a few resulted in psychotic breaks that prompted her to seek therapy.

The problem wasn’t that she was using drugs, she said, but a kind of casual or unmindful use where she didn’t take the time to learn from the experiences. She also is concerned about people experimenting with psychedelics in groups without setting boundaries.

Devin recalled one experience where she joined a group of new friends at a home in the Colorado high country for what they described as a journey weekend. But without her knowledge, she was given a powerful hallucinogen, known as 5-MEO. It was one of the most powerful trips she’s ever experienced, Devin said. But later in the night, stirring from an experience of being completely dissociated from her body, she awoke on the floor, alone next to a man. The rest of the group had gone to sleep.

Read Next: Jim Carrey Immerses Himself in Nature While Taking Mushrooms To Prepare for Psychedelic Film Role

“I remember feeling like something had happened — I couldn’t tell you what,” Devin said. “I felt violated, but not knowing why.” It was a later experience as a participant in a ceremony guided by a woman who trained in Ecuador that shaped how she facilitates groups. “There were rules: You can’t talk. You can’t touch anybody. Nobody touches you,” Devin said. “(I thought), ‘this is how you do psychedelics for healing,’ the other (stuff) was just chaotic and scary.” 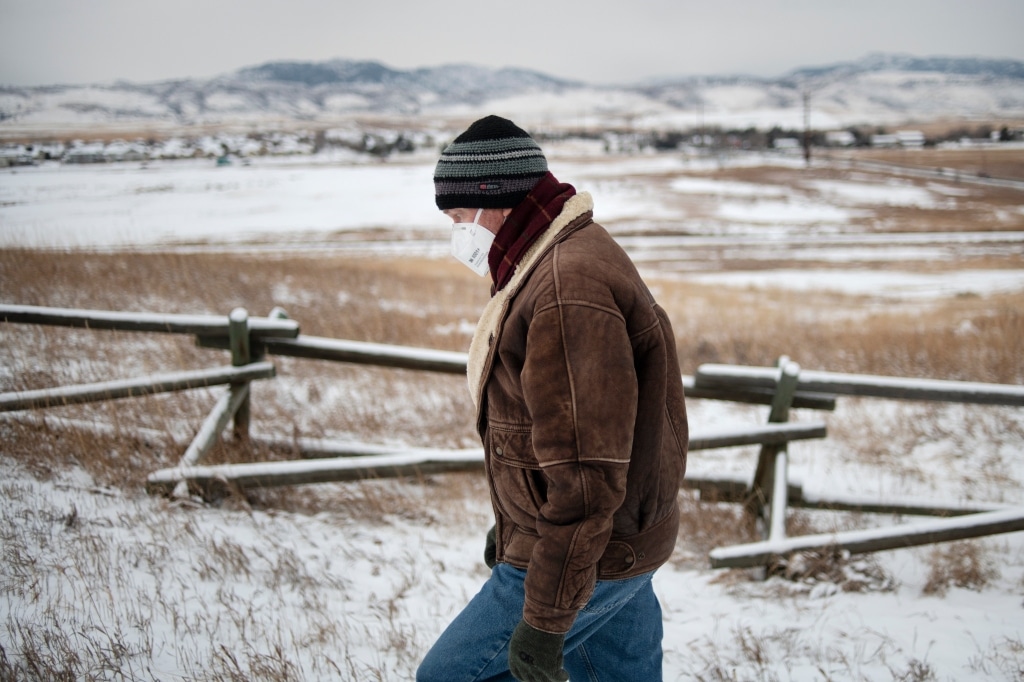 Floyd, the patient who uses mushrooms to deal with distress about his terminal illness, has had to experiment to find the right balance. In addition to taking small doses every three days, every few months he takes large doses of mushrooms with a friend, often other people with terminal diagnoses.

These days, Floyd’s depression and night terrors are nearly gone. He has the desire to get up, have a full day and see other people. And, he notes, it cost him about $600 to begin growing his own mushrooms.

It’s like changing the oil in a car, Floyd said. These days, his depression and night terrors are nearly gone. He has the desire to get up, have a full day and see other people. And, he notes, it cost him about $600 to begin growing his own mushrooms. “A freaking fungus never should have been described as a drug,” Floyd said. “They never should have been criminalized in the first place.”

Originally reported from The Colorado Sun