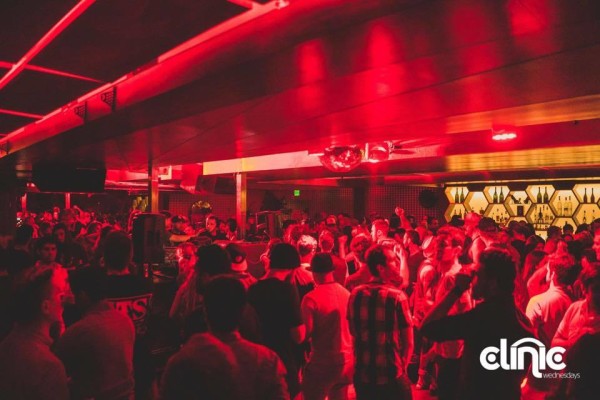 Though weekends in Los Angeles are always to impress, we can’t forget about the hump day fun – particularly with one of the best Wednesday night house and techno shows, Clinic Wednesdays. Happening at Couture in Hollywood for their second year, their lineup never disappoints.

Clinic has released their stacked March and April lineup – you can check it out below.

The dynamic duo of Frank & Tony, who also operate Scissor and Thread Records, have an undying love for house music you can hear in their music.  Frankie Skates and Tony B. Real build sounds constantly aimed to keep you moving on the dance floor. Their latest EP, and Scissor and Thread‘s first release of 2016, “Waiting Ground” is more magical than one could expect; the single  “Ebreo” will be released on vinyl on March 18th and digitally on March 25th.

Tickets and Information for Frank & Tony at Clinic Wednesday

Butane has been flying the underground flag, professionally, unapologetically, since 2001 when he began DJing. Owner of two exceptional record labels (Alphahouse & Little Helpers), and responsible for a sprawling and impressive discography of original work and remixes, he forges his own path. Butane consistently snubs offers promising money in exchange for small pieces of his soul. Those kinds of things chip away at a man until what remains is unrecognizable. Instead, he grows, evolves, changes on his own terms.

Tickets and Information for Butane at Clinic Wednesday

DJ Three, an American DJ from Pittsburg,  creates a sound that magically mixes house, techno and beyond. This music, mixing tradition and modern sound, is music to the ears of a very diverse audience and “a genre-bending passion for good music.”

Tickets and Information for DJ Three at Clinic Wednesday

Bortz is a German DJ originally from Augsburg. He has been a DJ for over 15 years and reached RA’s Top 100 DJs of 2011. His house and techno sounds – which he claims to “master as if they were hip-hop” (RA) – are due to have you dancing.

Tickets and Information for Daniel Bortz at Clinic Wednesday

Cardini, a French DJ and producer living in Cologne, Germany, has made a name for herself. She has played at popular nightclubs including Panorama Bar, Nitsa, and Fabric and continues to establish herself as a well-known DJ with an amazing taste in sound.

Tickets and Information for Jennifer Cardini at Clinic Wednesday

Hailing from Berlin, Germany, this deep house DJ and producer is the author of  productions of incredible musical skill and beautiful remixes . His signature rhythms, percussive usage and captivating atmospheres are due to blow your mind.

Tickets and Information for Powel at Clinic Wednesday

A Motor City, Berlin, London hybrid, Ryan Crosson is a complex artistic creature. Equal parts energetic, down to earth Detroit native and ultra-refined, musical aesthete, Ryan has one ear to the club and one ear far, far beyond. Known the world over for shape shifting, shoulder shaking tracks on groundbreaking labels including M_nus, Supplement Facts, Spectral, Wagon Repair, and his own Visionquest, Ryan’s production and sampling practices depart from the worlds of house or techno by referencing musique concrète, Downtown New York funk, and East African jazz. Born and raised on a steady diet of post-apocalyptic landscapes, dark warehouses, and the sounds of Plastikman, Matthew Dear, Magda, and Villalobos, Ryan’s DJ sets aim to expand the horizon of possibility without sacrificing dance music’s core element of sweaty, hedonistic fun. His unique musical vocabulary and tireless dedication insure him a place in the dynasty of forward-thinking techno transplants.

Tickets and Information for Ryan Crosson at Clinic Wednesday

Fort Romeau, a London-based producer whose real name is Mike Greene, continues to dominate the house music scene with his mixes. His first album, Kingdoms, was released last year on the LA-based label 100% Silk. He has an amazing ability to mix classic Chicago house with new, millennial generation beats that creates an unreal sound.

Tickets and Information for Ryan Crosson at Clinic Wednesday