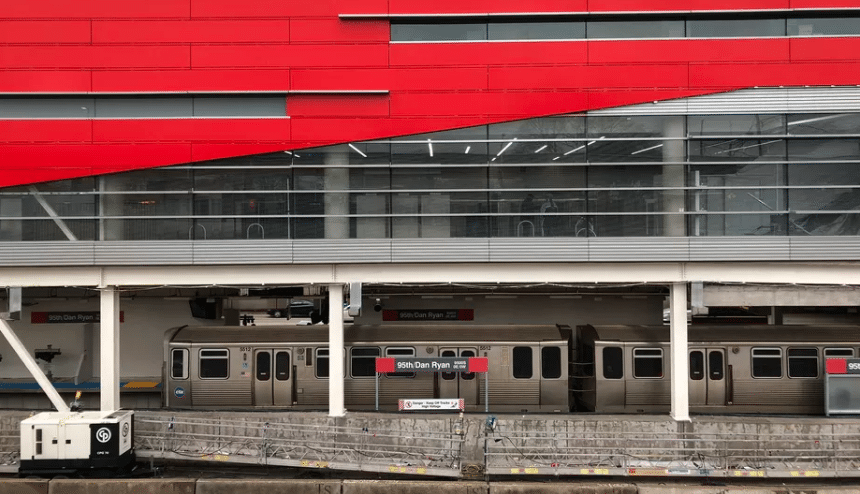 Chicago’s Red Line 95th Street Station has just undergone a massive $280 million overhaul, the most expensive station project in the Chicago Transit Authority’s (CTA) long history. What’s cool about it, though, is the incorporated “first of its kind” performance space at the new bus and train station that comes complete with its own radio station and DJ booth.

The CTA partnered up with Chicago-based artist and community activist Theaster Gates to design and create the new radio station,  An Extended Song of Our People (AESOP). Located in the transit building’s north terminal, the broadcast will showcase live mixes and oral histories from local artists and residents

“(We can) use the radio station as a platform for amplifying the daily ideas, the daily interests of our people. We can also pump really good soul, funk, house, and gospel throughout the station. Residents can get a little house music Friday evenings, like Frankie Knuckles, and for the morning commute some Sonny Rollins.” – Theaster Gates

When music isn’t playing, Gates wants to broadcast stories from community members in a podcast style. It’s an engaging and comprehensive way to showcase the daily ideas, interests, and stories of South Side residents. Currently, he’s working on finding more DJs and a public partner that can run the storytelling aspect of “AESOP.”

The artists’ performance space & radio station, called An Extended Song of Our People (AESOP), is located in the North Terminal & is the 1st of its kind public broadcast studio/disc jockey (DJ) booth. AESOP will provide riders with real-time programming, plus an on-site DJ.????️????????️ pic.twitter.com/ADHfBm78ew

“When I think about the kind of experience I want to have riding the CTA, I kind of want to wake up and hear some Aretha,” Gates said.