Celebrate #808Day With These 808-Inspired Tracks 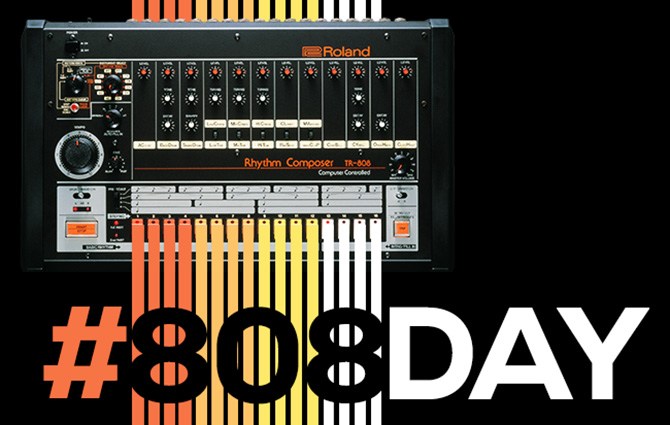 Celebrate #808Day With These 808-Inspired Tracks

As far as music technology goes, Roland’s 808 Drum Machine has been one of the most influential of our time, making it hard to believe that the now coveted drum machine was actually discontinued in 1983.

Since then the 808 has reemerged within the musical community and has made a drastic impact within all areas of music. This iconic drum machine has been used far and wide throughout the music industry, from hip-hop to house, and has undoubtedly changed the game.

To commemorate the 808 and all its bass-y and percussive goodness, we’ve selected a few fantastic tracks that utilized the legendary drum machine. Enjoy our selections, and make sure to let us know what some of your favorite 808 tracks are too.

Any artist or fan will attest to the power of the 808. It possesses a certain sub warming punch with percussive textures that are instantly recognizable. In 808 in My Mind, A Man’s Dream explores the various possibilities with the machine and brings forth a heavy drum workout of a track. It isn’t until halfway through that a melody hook becomes present, but even then the focus remains on the 808.

A timeless classic from A Guy Called Gerald, Voodoo Ray defined the possibilities of electronic music at the time. The iconic kick, toms, claves, and hi-hats are instantly recognizable from the first beat, and the simplicity of the vocal and Roland 303 proved how powerful these machines could be.

Back in the late 80’s, not many would have predicted the explosion of dance music in our cultural landscape. But with tracks such as Voodoo Ray there was a story being told, and it was only a matter of time before the word, and sound, spread all over the world.

Voodoo Ray on Discogs or Beatport

Fast forward to 2014 and the 808 is still kicking…pun slightly intended. Beesmunt Soundsystem displays how to extract a hard-hitting clubroom groove with Amsterdam 808. Relying solely on the 808 with a little assistance from some synth stabs, the track is a dance floor bomb waiting to go off. The 808 is a fundamental piece of technology in dance music, and it’s power and versatility is portrayed in this track.

Released just before the turn of the century, 808 The Bass Queen stands out as one of the many defining tracks of the time. Villalobos injects a level of hypnotic mysticism and slick emotion into this track, while fulfilling the less is more feeling. Not to say that the track is basic, but more a testament to how a few refined elements can stand out so brightly to make a complete track.

With only a few copies of the vinyl for sale on Discogs, 808 The Bass Queen is up there as one of the most sought out records in his catalog. But be warned. This one comes with a price tag…Luckily, there is a digital version available on Beatport for those who don’t want to shell out $120.

Do you not wanna 808? Hard to say no when it comes to the infectious groove from one of the best rhythm machines. Finding a home on Loco Dice’s label, Desolat, Wanna 808 went on to be a go-to jam on many occasions.

Wanna 808 on Beatport or Discogs

Where Ricardo Villalobos keeps 808 The Bass Queen relatively calm and peaceful, Redshape shows how to transform the 808 into a serious dance floor weapon. As described on Redshape’s Soundcloud, it’s nothing but a “Pure 808, a little fuzz, [and] some slight reverb.” Those few additions bring a whole new level of character to the 808 that can expand the creative process.

He’s been so kind and has giving this one out as a free download.

You know the 808 drum machine has made a deep impact on music when it starts finding it’s name referenced in group names. We’re talking about 808 State, and throughout the years they released countless albums and EPs spread out between ZTT Records and Warner Music. Pacific State is a feel good groove complete with lush pads, a charming hook, and of course, the powerful 808.

Obviously, there’s too many amazing 808 tracks to list, but we hope you’ve enjoyed listening to some of these 808 tracks from over the years. Share your favorite tracks with us, and make sure to find your groove today!