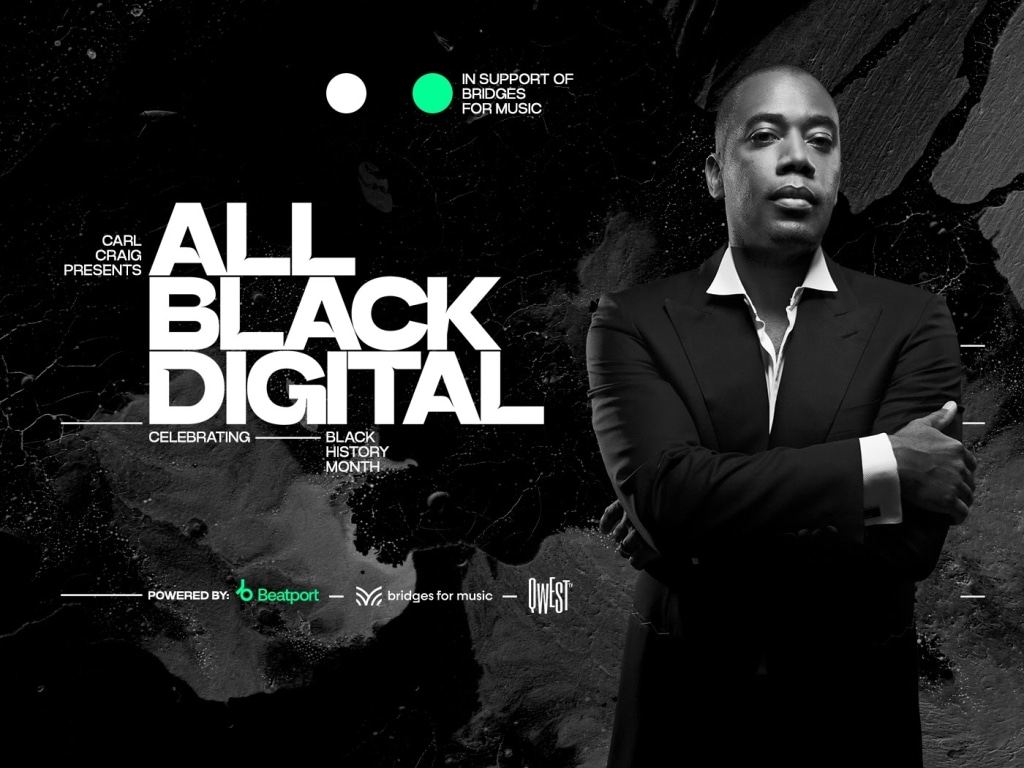 Carl Craig has built a legacy defined by the discovery, amplification, and showcasing of black excellence. Over the last thirty years his iconic Planet E label has acted as an incubator for the wide reaching and globally leading sounds of Detroit, fostering a creative mixing pot built from the unique perspectives of black and brown voices. Now, as the world takes a long awaited stride towards examining global race relations, Carl remains an intellectual leader for the music and arts community at large. Today, in celebration of Black History Month, Carl announces All Black Digital, a series of virtual conversations and performances in support of Bridges For Music and in partnership with Beatport and Qwest TV.

Each week of February, Carl will welcome some of electronic music’s most revered thought leaders to the table for a series of discussions. He will discuss Afrofuturism with Professor, DJ and composer King Britt, dig into the African-American origins of electronic music and subsequent white-washing of the genre with Make Techno Black Again’s DeForrest Brown Jr., and celebrate the thirty-year anniversary of Planet E alongside its multi-generational label mates DJ Minx and DJ Holographic. The final conversation will be recorded at South Africa’s living museum, Constitution Hill. This Africa Special will explore how the rhythms of Africa permeated into Black Music in the Americas, specifically Techno and House music.

It’s a great honor to return to South Africa and to perform in the motherland of my ancestors. The music I have been making, producing and performing for the past 30 years is an homage and continuation of what was born in Africa and runs through my blood here in Detroit.

Carl Craig on his forthcoming performance in South Africa

The series will culminate with a breathtaking live-stream from Constitution Hill, the former prison and military fort that acted as the incarceration site for world-renowned men and women like Nelson Mandela, Mahatma Gandhi, Joe Slovo, Albertina Sisulu, Winnie Madikizela-Mandela, and Fatima Meer. This is a location that bears testament to South Africa’s turbulent past and, today, is home to the country’s Constitutional Court, which endorses the rights of all citizens. Together with non-profit organization and music educators Bridges For Music, Carl welcomes some of South Africa’s brightest stars to perform alongside him including Villosoul, Gina Jeanz, Da Capo, Shimza and DJ Buhle. The stream will stream live across all Beatport platforms in addition to Qwest TV, live and as video on demand.