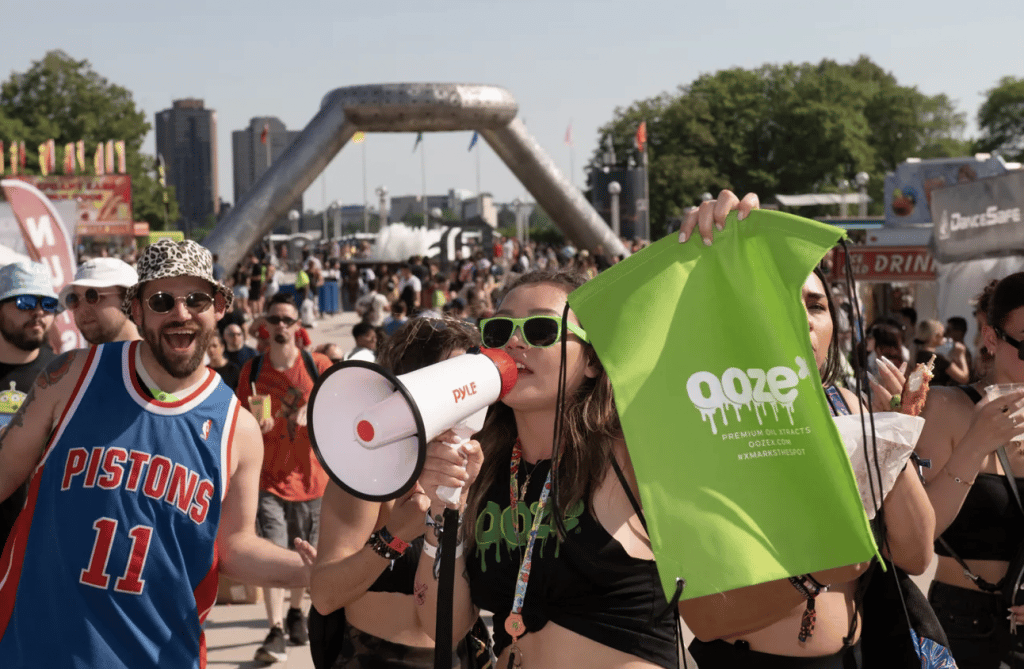 Detroit — Those in the know might say the marijuana scene at the Movement Electronic Music Festival is dank.

In addition to the performers and techno fans at the event, which returned this weekend after the COVID-19 pandemic silenced it for two years, the cannabis industry is also kicking up its heels.

Marijuana-related businesses were highly visible at the international dance music celebration in a sign of growing mainstream acceptance of the drug.

One, Troy-based JARS Cannabis, is the first cannabis retailer to sponsor the event.

JARS has 14 dispensaries in Metro Detroit and four in Arizona. Their space at the Movement Festival included adult coloring under a canopy, temporary tattoos and an “Instagram-able” area designed by artist Kylie Hight.

The festival, which had five stages for performers in the past, added a sixth — the Detroit Stage presented by JARS — for this year’s event and it featured Detroit-based artists. It also sponsored the festival’s official opening party on Friday and the official closing party on Sunday.

Other cannabis companies that sponsored this year’s techno music festival include Weedmaps, Breeze Dispensary and Ooze.

Sam Fotias, the Movement Festival’s director of operations since 2006, said the cannabis companies account for 25% of the event’s sponsorships. Other sponsors included Budweiser, Tito’s Handmade Vodka and Michigan CAT.

“I think this is a prime example of what has happened in that industry over the last two years while events weren’t happening,” Fotias said at the festival Sunday. “We were approached by a multitude of brands and we were fortunate enough to have the time to vet all of them and see who was the right fit for us and how easy their teams were to work with.”

The presence of cannabis vendors didn’t seem to bother festival-goers.

Mary Dynis, 25, of Las Vegas, said she came to Detroit just for Movement. She first attended the festival in 2019 and was excited about its triumphant return. She said she’s been at the festival all weekend.

“Movement is monumental and life-changing,” she said. “Detroit brings the techno. The music shatters the earth. It’s crazy.”

Read Next: Why I Attend Movement Electronic Music Festival In Detroit Every Year

Dynis said she didn’t notice if there was more or less pot smoking or cannabis consumption at the festival than in 2019.

“I think it was just as much as before,” she said. “People are always going to smoke weed, no matter where you go.”

She also said it didn’t bother her if cannabis companies were sponsoring the event.

Ally Galanty, a JARS spokeswoman, said at the festival Sunday that the company hasn’t had negative feedback.

“No one is coming up to us upset,” Galany said. “If anything, it’s more curiosity (and) excitement that we’re seeing as the main sponsor, which speaks to the progressiveness of what happened during the pandemic.

“Three years ago, I don’t believe this would have been the case.”

Galanty added the company will also sponsor the Breakaway Festival in Grand Rapids at the end of August.

Tristan Blackett, marketing director of Ooze, a hardware cannabis company founded in Oak Park, said cannabis brands can’t do traditional marketing on social media or television because while the drug is legal locally, it’s not legal on a federal level, prompting the company to focus on events — until the pandemic struck in March 2020.

“We realized we have to spend our marketing dollars wisely with a focus on experiences,” said Blackett, 46. “A lot has changed on the national, state and local level because weed is no longer the big, bad thing it once was and people are finally coming out of the green closet.”

James Sesi, 36, remembers attending Movement in his 20s when the event was just a few stages facing the river. Sesi is one of the five partners who own Ooze.

“Last night seemed nuts with thousands of people here to see 2 Chainz,” he said Sunday. “It’s pretty much the same as it always has been but the main difference is you’re seeing these weed brands take hold and be confident in their product marketing. We did 46 trade shows in 2019 before the pandemic hit and now we’re trying to make a comeback. It’s crazy to think about where we started.

“I used to sneak weed into this festival and now we’re basically walking in with a joint in our mouths,” he said.

About 5 p.m. Sunday, friends Sylvia Cisczek, 26, of San Francisco, Ben Barteau, 31, of Reno, Nev., and Brooke Spruit, 27, also of San Francisco, were lounging on the grass near the festival’s ticket sales tent near Huntington Place. They were waiting for another member of their group, Brooke Ritter, 27, of Royal Oak, to join them before heading into Hart Plaza.

Like Dynis, they all said they didn’t mind the cannabis industry’s sponsorship of the event.

In fact, they pointed out that there was even a spot in the festival where party-goers could have whatever they were going to consume tested for fentanyl free of charge.

“They have stations around and I think that was kind of neat seeing that,” Cisczek said.

Barteau added: “We’ve all lost friends who died from fentanyl overdoses. This is some peace of mind.”

Originally reported by The Detroit News.