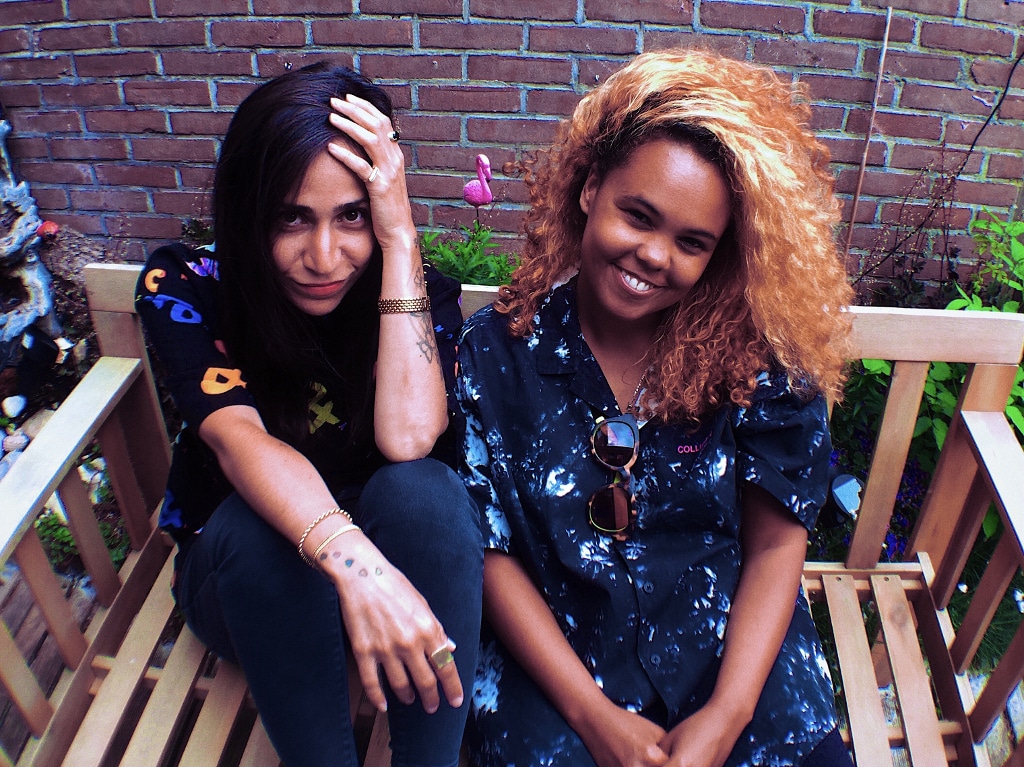 Music is a form of expression that conveys emotions and messages. It tells love stories and heartaches. Music has also been a means to disrupt the status quo and expand consciousness. Going against the current isn’t always the easiest or safest because it can single you out. Stepping away from what’s expected and doing things differently involves risk, and not everyone is willing to place their bets. However, for the DJ duo, Black Girl/White Girl (BG/WG) being different—both in their personal and artistic lives—has given them freedom.

In an industry where authenticity is key to success, many artists fall into trends replicating sounds to please labels and crowds. These pitfalls lead to saturation often leaving little room for original content. “We try to make music that sounds different than what’s already out there,” says Ty, one half of BG/WG. “We’re lucky because the things that we love are also not the usual stuff.” Since meeting in 2012, the duo (comprised of Karin and Ty) haven’t spent more than a few weeks apart. Their love for music brought them together, and it’s also what keeps them together when they step away from the DJ decks.

At the end of the day we’re all [people], we all have some story. We all can make an impact…We are in 2020, and what’s giving me a headache is why stuff like [this] still a subject. Why is it still a thing?

Although the real-life couple shares similar backgrounds and is close in age, they see the differences that make them unique. Karin is of Israeli-Portuguese descent, and Ty a Curacaoan based in Amsterdam. “We are queer. I am a person of color. Karin is Jewish-Israeli. We see it from a different angle,” says Ty of their identities and how it plays into the Black Lives Matter movement. “I’m sad that the whole world had to watch a Black man die. It’s just ridiculous that that’s what was needed for everybody to wake up. Stop this violence that’s going on….it’s almost normalized. You see these news [headlines] and think ‘another one,’ but then you think ‘f*ck another one!’” They both know the road to change has only started and just hope that where it starts is not where it ends.

At a time where racial tensions run high and micro-aggressions have become full-blown injustices, they’re mindful of how much news and social media they consume on a daily basis. “We found ourselves needing some space and relaxation, so we connect[ed] with nature,” shares Karin. Reflecting on life, its purpose and the stories people create. For them, that purpose is music and sharing their story with the world through it.

The Journey Into the Unknown

Thanks to MTV and VH1 their musical journey began. Both Karin and Ty admit that the music channels were a gateway to self-discovery leading them down the music rabbit hole. “I used to watch [all of that] and be impressed…I wanted to be so desperately in a band. I used to play guitar and I can’t sing, [so] back then I already knew okay it’s not for me,” laughs Ty. “I want[ed] to do something with music but [knew it wouldn’t be] singing or playing guitar because I didn’t love it that much. Later on in life, I realized there’s also something called being a producer and DJ. […] I can learn this stuff…I can study it. I can go online [and go] on YouTube and just do it.”

It’s different when you’re producing the music yourself because you’re coming from a different direction. I wish I could listen to our music as if we didn’t make it—to experience it in a different way.

Once you produce you never go back, Ty (one half of BG/WG)

Reminiscing on their early music memories BGWG highlight artists who inspired them growing up including Celine Dion, George Michael and The Spice Girls. However, as change is the only constant in life so is the curiosity that encourages them to explore other sounds–something they continue to experiment with. “Tastes evolve and change. I think from last year we’ve started to target a different sound. A little bit higher BPM,” says Ty. “We have a lot of music right now that hasn’t been signed, yet purely because we already have music scheduled…that [music] is also kind of a different sound to what people will hear right now.”

BGWG have been producing music for more than a decade, but it’s only recently that they feel they have a firmer grasp on their sound. “After almost 15 years of learning, only in the last two to three years I actually feel like ‘wow okay, I kind of sound like [how] I want to sound like—together of course—we were able to create something that people view as proper music,” says Ty. Well, getting the attention of Green Velvet, one of the most respected figures in house and techno, probably means you’re doing something right.

The natural sound progression of BG/WG, Karin (one half of BG/WG)

In 2018, they released Space Cookies EP via Green Velvet’s Relief, and since then, they’ve followed it with another two EPs on the imprint (Mind Warp and Twilight Zone). Their music has also gained support from major artists including The Black Madonna, Maya Jane Coles and DJ Deeon. “We have a vision of the sound we want to target, are more aware of what we’re doing, what we want to achieve [and] what feels right,” explains Karin. “We have this goosebump [moment], the right energy. We’re looking at each and we have this smile, so we know we’re going to the right places.”

Despite making strides in the music industry one thing doesn’t change: doing music with a purpose they connect to. “We never wanted to do it for the charts or just for the Top #1. We always say we need to stay true to ourselves,” says Karin. “We’re not just copying to be a sound that is hot at the moment. We knew it would be a struggle because you’d be an outsider, and we’re already kind of an outsider. We said [that’d be] our purpose and we’ll stick with that.”

We’re constantly inspired by life. […] At some point, we say ‘It’s time for something new, something fresh.’ We become, I wouldn’t say bored, it just doesn’t activate [our] creative bone anymore.

Never Missing a Beat and Always Broadening Creative Horizons, Ty (one half of BG/WG)

Their upcoming EP ELEV8 shows why sometimes less is more. “Specifically for this EP we wanted to bring it back to basics,” says Ty. “We love techno [and] want to make techno [but] do it as clean as we can in the sense that it’s recognizable but keep it raw. What makes or breaks a track for us is the raw sound.” ELEV8 captures their never-ending quest for pushing their creative boundaries while keeping the integrity of house and techno intact. Each track has its own vibe and groove, super fun, always different. “We were inspired by the jackin’ techno sound we all know so well, but also by elements of acid house, disco, electro, and rave,” BGWG shares of the new EP. “We respect and value the rich history of house and techno so much and are so incredibly inspired by it.”

BG/WG show that one thing is clear: being different isn’t necessarily a bad thing. It means you’re standing out and helping change expectations. Everyone has their own identity, beauty and story to share.

In honor of the U.S. national observance of Pride Month, Black Girl/White Girl celebrate the freedom to be, and share some of their favorite tracks from LGBTQ artists. Check them out below: