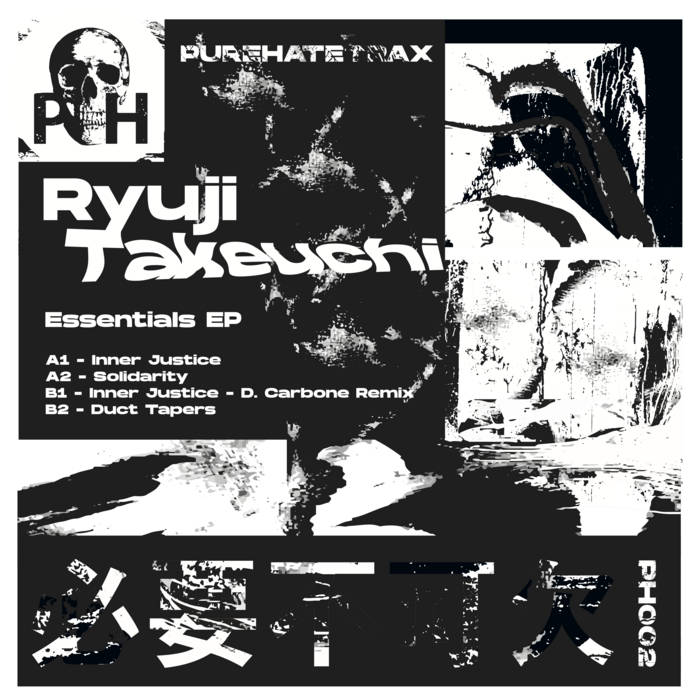 Berlin’s PURE HATE delivers one more release for 2020 from Osaka’s Ryuji Takeuchi presenting his Essentials EP, which comes in the form of 3 original tracks with a remix from D. Carbone.

PH002 is available in stores from 14th December 2020, distributed by Ready Made Distribution, Berlin.

Ryuji Takeuchi (Local Sound Network / LSN, HueHelix) was born in Osaka, and then first contacted with Electronic Music in the early 90s.

In the late 90s, he moved to the United States, where he discovered Techno, House and Electro Music.

As soon as he got back, he started to DJ at several locations and eventually learned to produce at the same time. After that, he released on such labels as: LK Rec, Arms, Mastertraxx, FK Rec, SWR, Innervate, I.CNTRL, Impact Mechanics, Silent Steps, GSR, Brood Audio, to name but a few.

As a DJ, Ryuji had a debut at Awakenings at Gashouder, Amsterdam, Holland, in 2007, when he closed the night with his tremendous 90 min DJ set.

In 2011, Ryuji started his own imprint called ‘Local Sound Network / LSN’ as a platform for new generation of electronic sound which following words can appropriately describe: driving, hypnotic, atmospheric, emotional, groovy, funky… and any other aspects that rock from brain to the dance floor under the following statement:

From local to global…

It exists in order to inspire the world…

Also, Ryuji kicked off another brand new label called ‘HueHelix / HHX’ as a new platform, which discloses something new, only represented by HueHelix, together with Go Hiyama, Tomohiko Sagae and Kazuya Kawakami, in order to push quality music with global standard from where sun rises.

In 2012, Ryuji launched ‘Local Sound Network Digital Solutions / LSNDS’ series in need of discovering and introducing wider range of electronic music, aiming at dropping unique audio output while it’s hot. Music style varies. All top quality output from new and established producers all over the world with its bottom line as follows:

What we believe in…