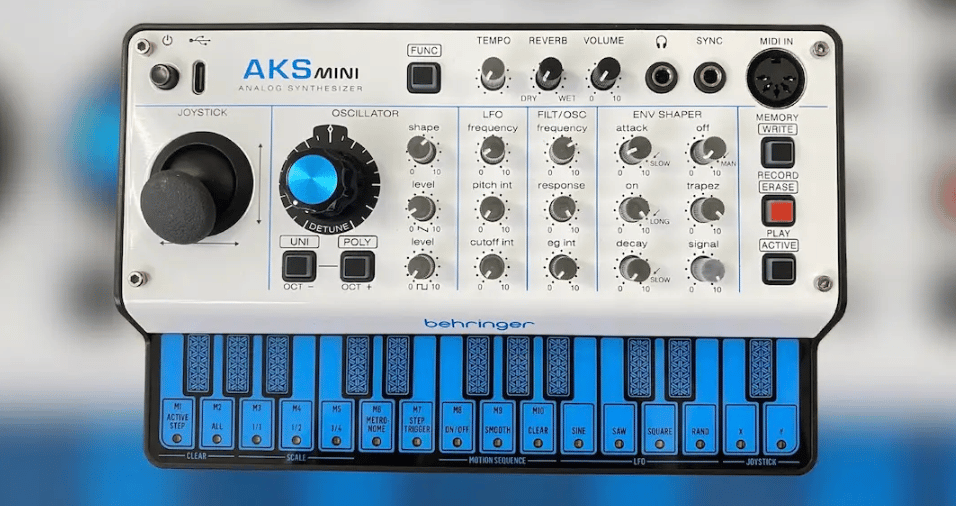 Synth and audio-interface company Behringer says it’s nearing completion on a recreation of the EMS VCS3, with first orders expected to ship this summer.

The synth is part of Behringer’s Soul series—classic synths recreated in a tiny, desktop form factor and sold at very low prices. The AKS Mini is designed to emulate the sound of the VCS3, created by British synth company EMS in 1969.

According to Behringer, the AKS Mini uses the exact same oscillators and filter as the original synth, but also includes a 27-note touchscreen keyboard, a 16-step sequencer and an arpeggiator. Additional features include a built-in reverb and LFO, USB-C and midi jacks, and the ability to record parameter changes made with the knobs.

Over the past couple of years, Behringer has teased the release of dozens of synths inspired by classic models, including low-cost, mini versions of the Roland Jupiter-8, Minimoog Model D and Sequential Circuits Prophet VS. With a similar shape and size to Korg’s highly successful Volca range, these are intended to put classic-sounding synths into the hands of any bedroom producer.

The original VCS3—which today fetches upwards of £15,000 on the second-hand market—was one of the first portable synthesizers and had a huge impact on early electronic music and prog rock. It was used by Pink Floyd, Brian Eno, Led Zeppelin and many others before being embraced by the likes of Aphex Twin, Autechre and Orbital.

Read Next: Buying Your First Sythesiser