Behind The Scenes At Brooklyn’s Dirtybird BBQ

Behind The Scenes At Brooklyn’s Dirtybird BBQ 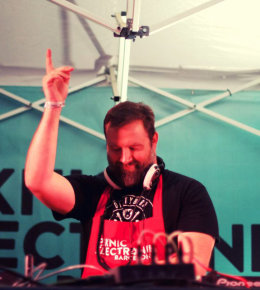 Claude VonStroke’s career as a DJ/Producer has been monumental, rivaled only by his accomplishments creating and running dirtybird Records. In just 11 years, what started as a small get-together of friends in San Francisco’s Golden Gate Park has turned into the behemoth that is the dirtybird BBQ. This summer, they packed up the grill and brought their legendary BBQ on tour across North America, hosting events in cities such as Detroit, New York, and Toronto, as well as linking up along the way with larger events and festivals, culminating in a full-fledged dirtybird stage at Hard’s Day Of The Dead. The BBQ featured the usual dirtybird suspects, including Claude himself, Justin Martin, Christian Martin, Justin Jay, and many more. Although he is running one of dance music’s most influential labels, Claude comes from humble beginnings, and his dirtybird BBQ have time and again reinforced this DIY aesthetic, creating a welcoming and inviting place driven by a love for music and a deep desire to push the limits. Back in 2003, there was a huge void in San Francisco’s dance music scene; DJ’s had gravitated toward jazzy and soulful house music, and labels weren’t too keen on darker and edgier sounds. Claude and his friends, inspired by techno, hip-hop, and bass music, brought an entirely new sound to San Francisco, and, later on, the world. He is often seen as a primary tastemaker within the dance music community, fostering talent of all ages and creating a platform for a generation of artists to break into the scene. As Grillson neatly puts it: “The thing blew up, everyone got famous, and here I am on tour.” The parties were a huge hit, drawing an enormous turnout in each city. Luckily, they have documented the adventures on video, and have released a behind-the-scenes glimpse into this incredibly unique event.

Check out the video below, and click here for more info