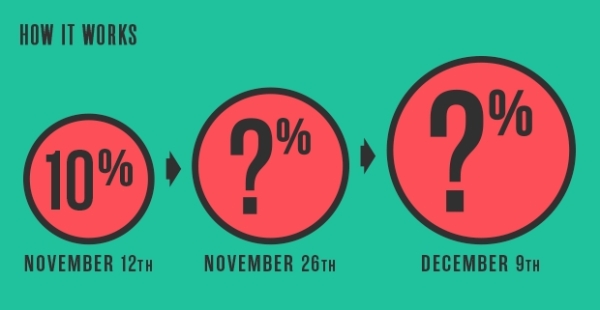 The holiday season is upon us, and as much as we love spending time with friends and family, some amazing deals always make us feel better. To keep in line with their holiday tradition, Beatport has recently announced their winter promotion campaign.

The promotion is done in three phases, and requires involvement from the start in order to achieve maximum savings. Just like the previous winter promo it starts by using the first code given through their newsletter and website. Take a look at the following steps to capitalize on the discounts:

1) Enter code “STEP1” to save 10% up until Sunday, November 23rd, and qualify for the next discount code.

2) After using the first code, users will receive the second code on November 26th with an even bigger discount to the online store.

3) Last, on December 9th after using the second coupon users will receive a code for Beatport’s largest discount of the year.

In the past the second and third promotion discounts were 25 and 50% respectively. This may be the same this year, but who knows maybe the folks at Beatport are feeling extra generous this year.

In order to take full advantage of this it might be wise to purchase very few tracks when using the first code for 10%, making yourself eligible for the second stage while not shelling out excessive money on tracks. Do the same for the second promo, and hopefully if Beatport repeats history with the 50% discount on stage 3 then that’s when you can let go, and really load up on tracks.

From a marketing standpoint this is a great way to get the consumer onto the site, and one that is unrivaled by many of the other digital music stores. So if you’ve been eager to pick up new tracks, this is probably the best time of year to do it. Head on over to the Beatport store and start browsing and looking for those gems.