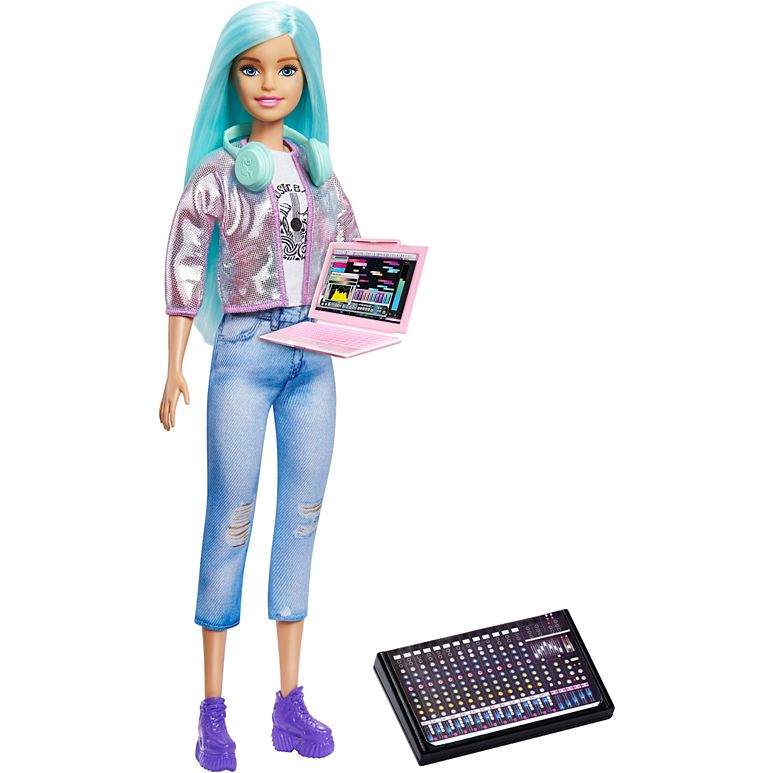 Mattel, the creator of Barbie, nods to female underrepresentation in the music industry. The new Barbie Career of the Year is Music Producer. The Barbie comes with all the music producer essentials: sound mixing board, a computer and headphones to get the creativity flowing and music going.

While women make up almost half of the global population representation is lagging when it comes to visibility outside the home. Looking at the music industry alone, women make up less than 3 percent of music producers. However, women in the workplace have been steadily breaking through glass ceilings. From corporate America to artistic careers and everything in between, women are empowering each other and creating their own opportunities now more than ever. Sure, some might scoff at the latest Barbie Music Producer doll but the first step for change is awareness. The doll serves as a visible manifestation of the strides popular culture is making toward inspiring young girls to think about career paths in the music industry. You can’t underestimate the value and importance of seeing yourself represented in elements of today’s world.

When girls play with Barbie®, they imagine everything they can become, and for those that love making their own music, they can be a music producer! Right on beat, a music producer is responsible for working with musicians and artists to create and publish musical projects. This exciting music producer doll wears a graphic tee, trendy jeans, an iridescent crop jacket, platform boots and has amazing long blue hair!

Read Next: Tracking the Diversity (Im)Balance of 2021 Music Festivals

Barbie is also teaming up with MTV to raise awareness and shine a light on current music produced by women in hopes of inspiring the next generation to follow their lead. On September 18 at 8 a.m. ET, Barbie and MTV will host an hour-long takeover of MTV’s Saturday Music Video Block to feature music hits produced exclusively by women.

Girls Make Beats® (GMB) is a 501 (c)(3) nonprofit organization that empowers girls by expanding the female presence of music producers, DJs, and audio engineers. GMB was founded in 2012 by certified audio engineer, Tiffany “Delilah” Miranda. GMB works with girls ages 5-17 and hosts educational seminars, summer camps, industry panels and networking events. GMB helps girls further their careers as music producers, DJs, and audio engineers by providing courses on industry-leading hardware and software. GMB also serves as an outlet for girls to unite and collaborate within the music industry. With a presence growing globally, GMB is dedicated to creating real-world opportunities for girls to break barriers in the music industry.