Aslice: A New Service Aiming To Equalize The Disparity Between DJs And Producers 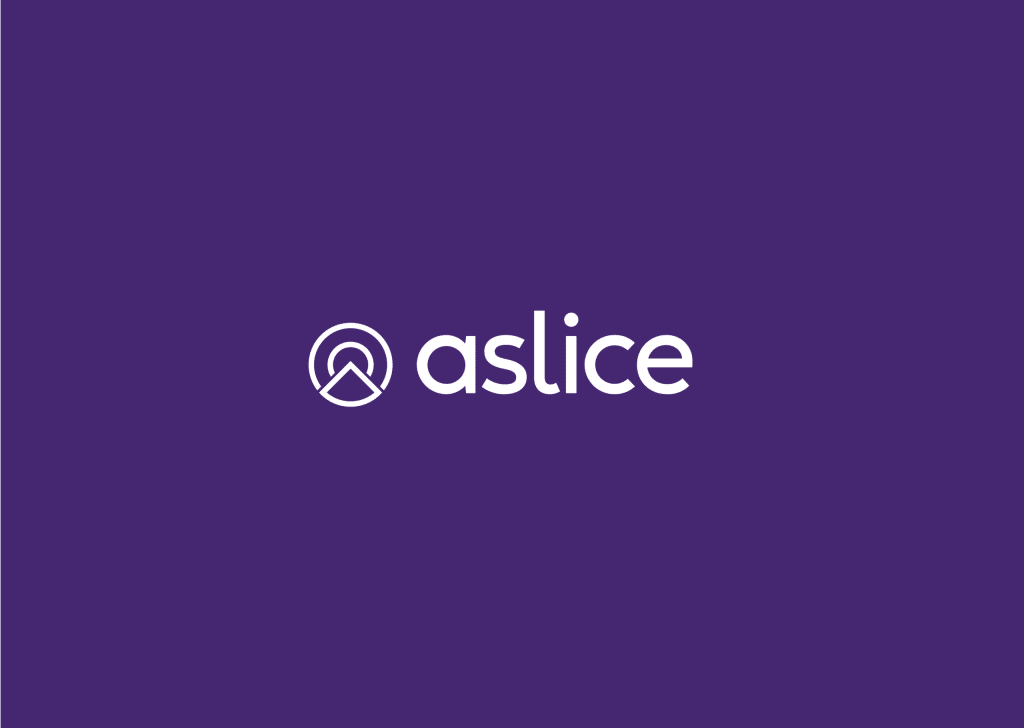 Aslice: A New Service Aiming To Equalize The Disparity Between DJs And Producers

Zak Khutoretsky (aka DVS1, US producer, DJ, and Berghain resident) conceptualized and founded Aslice in 2020 and recruited music and media veteran Ethan Holben (former Global Head of Red Bull Radio and Vice President at Yadastar) to serve as the CEO.

Empowering DJs to share earnings with producers directly, Aslice is a community-focused service dedicated to creating a fairer music ecosystem with software that facilitates easy and accurate reporting.  Seeking to revolutionize the relationship between DJs and producers, Aslice creates a service that makes it easy for producers to get paid when DJs play at music gigs — with the potential for music producers to be paid an estimated $55 Million annually.

Over the last four decades, electronic music has undergone a seismic shift. Evolving out of warehouses and loft parties to ultimately find its place in mainstream media and festivals, the industry of electronic dance music is currently valued at over $7 billion (USD) of revenue annually.

As the awareness and attendance have gotten bigger, so have the DJ fees, while the people making the records earn less than ever. Numerous articles have been written on the topic, countless social media posts have pondered the solution, as well as many untold conversations — all reveal the harsh reality that: despite being the third most popular genre, electronic music and DJ culture as a whole isn’t taken seriously by the music industry…especially when it comes to financial fairness. 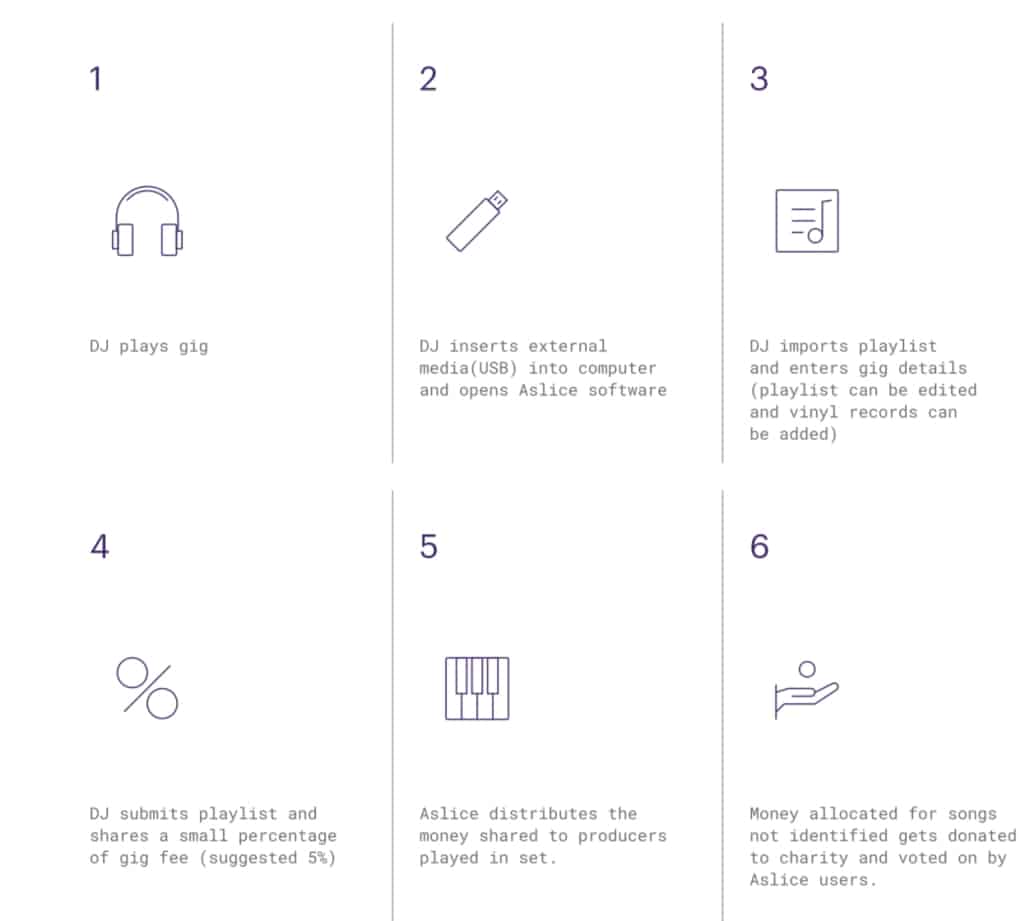 For the major players, it’s not difficult to pretend that things are working as they should. There are statements from publishers and performance rights organizations (PROs) to the effect of ‘we pay performance royalties on all songs that are reported’ ignoring that “the most recent figures from AFEM (Association For Electronic Music) suggest that, at any given time, 40% of the Beatport Top 100 is not eligible to get royalties” Many producers don’t register with PROs because they distrust the existing collection societies and misunderstand the complexity of registering their music. Oftentimes, DJs also don’t report setlists because they don’t have an easy or practical approach

As for the current collection services, they fail to capture playlists and pay the right people for several reasons. To start, their collection methodology is outdated – relying on DJs to handwrite a playlist from a multi-hour set is unrealistic, and music recognition software/hardware has been installed at an estimated less than 1% of venues and festivals worldwide.

By acknowledging the truth that over the 40 years of DJ culture, Aslice has accepted that collections societies will not solve this problem. However, the solution for Aslice has become apparent: Build a simple, data-driven service that creates a different, but much-needed redistribution approach that comes from within the community — basically,  promoting fairness in DJ and producer culture.

Simply with Aslice, when DJs play music, the artists they play get paid. Truly, Aslice delivers what no collection society has been able to deliver since DJ culture began. It’s a practical system that captures playlists from DJs with unparalleled accuracy and distributes a small portion of the DJ gig fee directly to the producers played. The software is powered by a mix of algorithmic analysis and machine learning that guarantees the accuracy that the DJing community is in need of. There is no need for external devices, DJs manually writing down their playlist, no middlemen, no black boxes, or artists at the top of the charts who inadvertently taking the intended producer’s income.

For DJs, Aslice simplifies reporting by capturing DJ software playlist data (from leading brands such as Pioneer, Serato, and Traktor) and uploading the text file via the Aslice app. By utilizing metadata and other identifiers, Aslice matches songs through its proprietary machine-learning algorithm to public databases in order to identify and attribute tracks correctly. Aslice then enables DJs to share a small portion of their gig fee (Aslice suggests 5%) to all producers on the playlist. 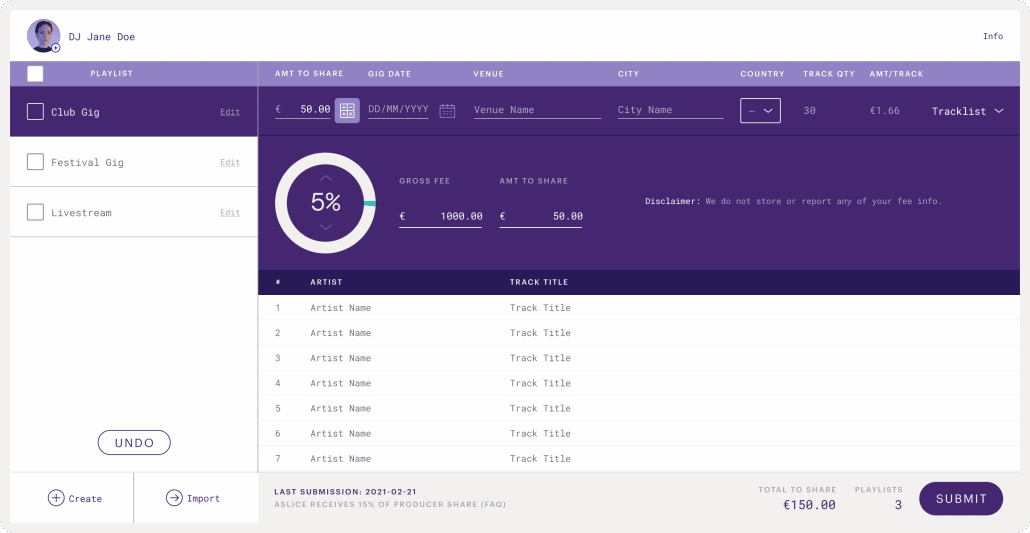 For producers, it’s as simple as registering their details with Aslice. Every time an Aslice-registered DJ uploads a playlist with their song, they get paid. Even unreleased music is easily attributable into the Aslice system by simply adding the producer’s Aslice ID to the metadata. The software has also accounted for how many top DJs play almost exclusively off promos. Every user has a unique “Aslice ID” that can be added to the tracks’ metadata, so Aslice can automatically identify them if DJs are playing tracks before they are oficially released (or, in some cases, never released).

In the current model, unattributed music earnings typically get allotted to the wrong artist and paid to the billboard or top 100 lists. In the Aslice model, unattributed funds go to The Aslice Foundation and get funneled back into charities chosen by the community of users. Aslice finds that this new process is transparent, fair, and something the entire community can get behind.

At the end of 2021, after several months of targeted group meetings with DJs and producers, Aslice started its private beta phase of the app. The goal of the private beta was to learn about the overall user experience and generate data that would show the impact of the service on the music community. The users were asked to create and verify an account, download the software, and upload a playlist to identify improvements in the registration process and populate the service with unique tracks to push the automated machine learning matches.

Aslice set an initial target of inviting 50 working DJs to upload one playlist each in the private beta phase. The privately invited DJ user group represents 5% of the near 1,000 working House and Techno DJs who will undoubtedly benefit from using the software. Aslice exceeded this goal and accumulated more than 100 engaged users and over 100 playlists in the early beta development stages. 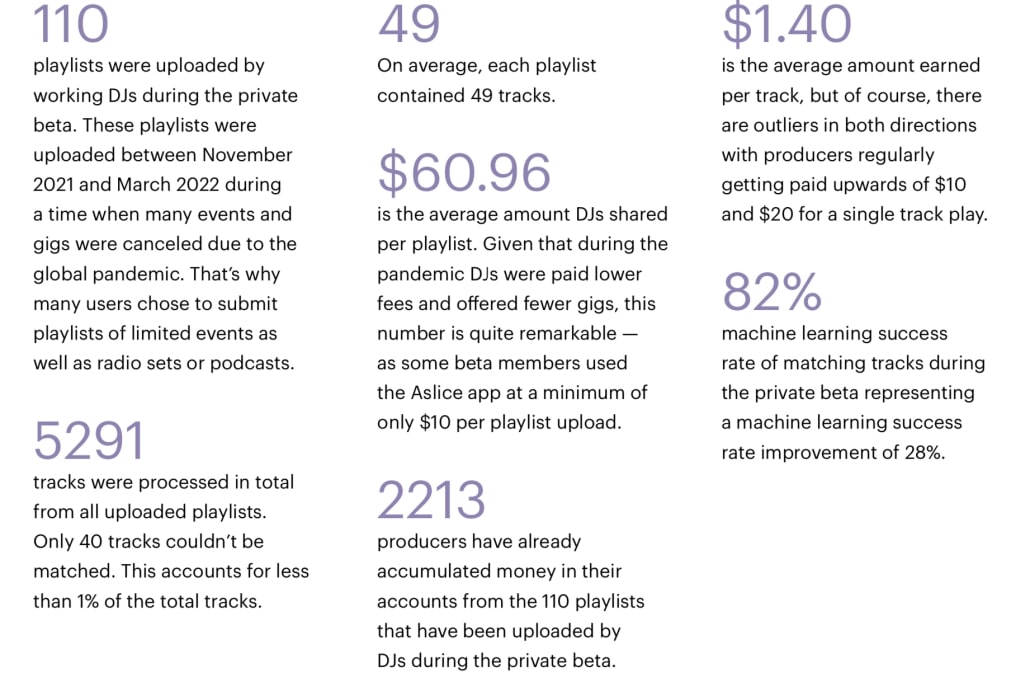 Our current reality is that producers working on independent labels are making little to no money and a recent survey showed that 17% were doing unpaid work for major labels. While Aslice hopes that the wider music industry will do more to address these untenable problems, the company is born from the acceptance that industry-wide structural change won’t come fast enough, if at all. As a result, Aslice is built by the community for the community.

In 2019, DJs reported earnings of 1.1 billion dollars according to the IMS Business Report. Had they shared 5% of their fees, producers would have received 55 Million dollars they would have never received otherwise. If the DJ community can get behind Aslice’s culture of sharing, the endgame will not only be creating a fairer ecosystem, but the goal of shaping peoples’ lives.

Read Next: The Highest Paid DJ List Is Here: No Women, But There’s a Giant Marshmallow 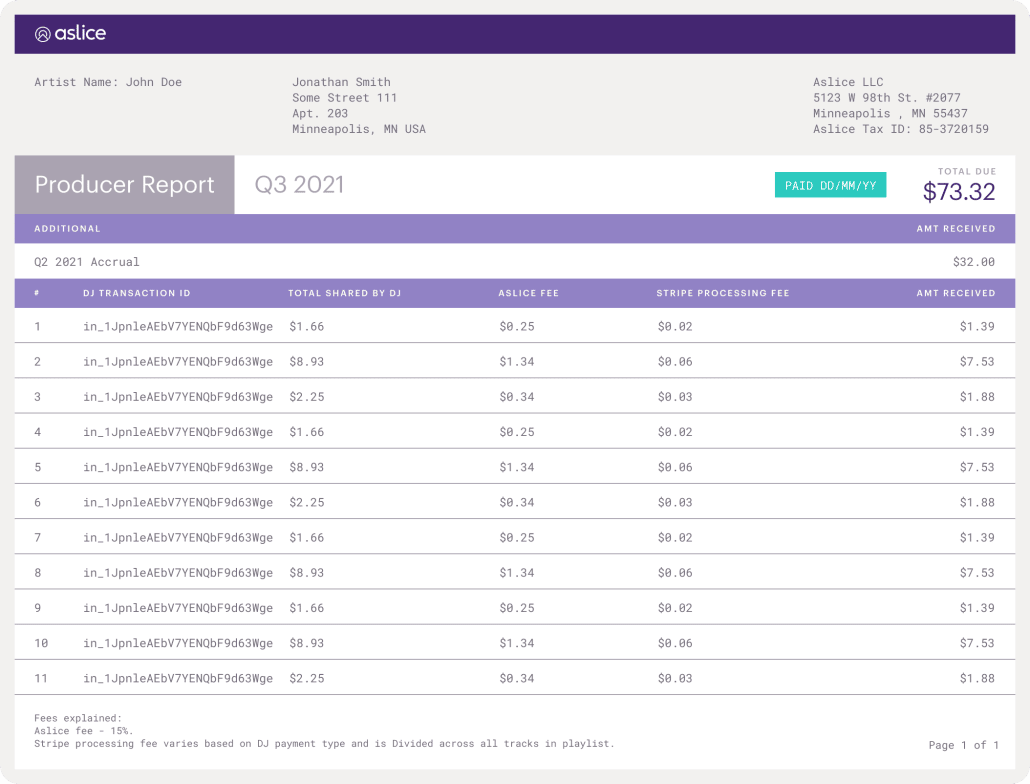 For some producers, Aslice may result in the first payments in their career. For some legacy artists who made classic records still played today but signed some horrible record deal, this could be a second chance at getting the income they deserve. Above all else, Aslice represents a meritocracy – if your record gets played in a club, you get paid fairly.

With playlists from real DJs playing in real clubs worldwide, we can start to learn how often records get played, what a city sounds like, and identify producers on the rise long before their first interview or in-depth feature. For the first time, there will be playlists that reflect what a DJ really plays, not what records make them look cool or friends they need to promote – our industry has never had this data.

In the year leading up to and during the private beta phase, Aslice also spoke to over 400 DJs and producers in 1-on-1 meetings, and small group info sessions to introduce the service and solicit feedback to ensure that the DJ community’s needs would be met. As Aslice announces the service and transitions from private to public, the company is eager to see the positive impact already evident from testing with more users.

Later this year, Aslice will introduce a “Fan Section” which allows users to follow DJs, producers, clubs, and even cities to view the playlists, tracks and other gathered information. All profiles will automatically populate with data and can be customized by artists (DJs and producers). Each profile not only displays the affiliated labels but gives total freedom to include buy links to any retailer.