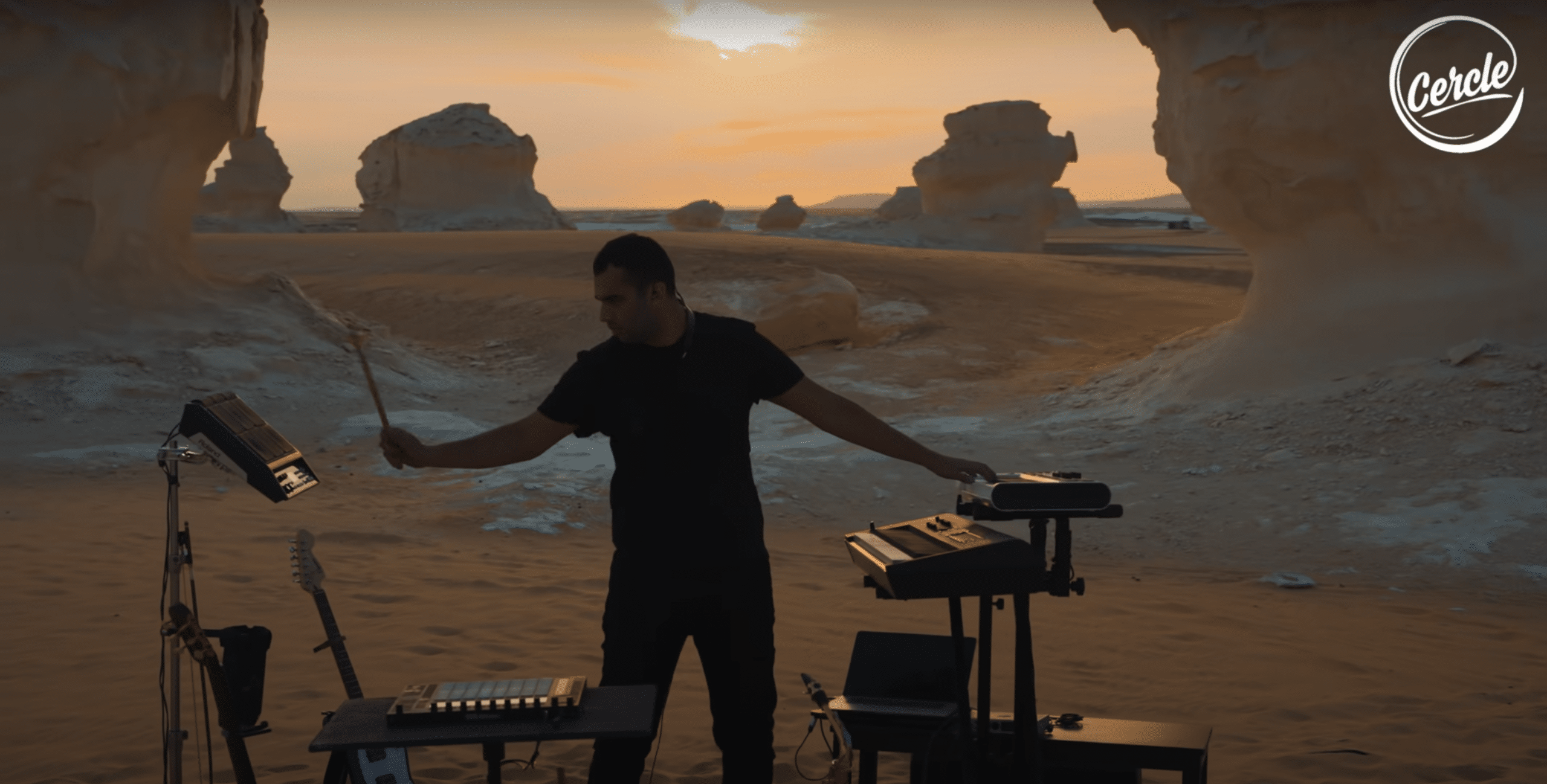 French-Egyptian live artist Ash talks us through how he took his live set from his studio in Montréal to the desert, for his new Cercle stream and release on Cercle Records “White Desert.”

It takes a live musician/producer like Ash, with over 500 million streams of his own compositions; the ability to play piano, guitar, sax, drums/pads, electronic keyboards/wind instrument; a life shared between Egypt and French Canada, and a knack for creating electronic music with multi-cultural influences to be granted permission to film a solo music video at the ultimate in atmospheric venues, the breathtaking pyramids of Giza at sunrise. And he’s still in his early 20s.

Check out the multi instrumentalis Ash’s set-up for his Cercle live stream below: 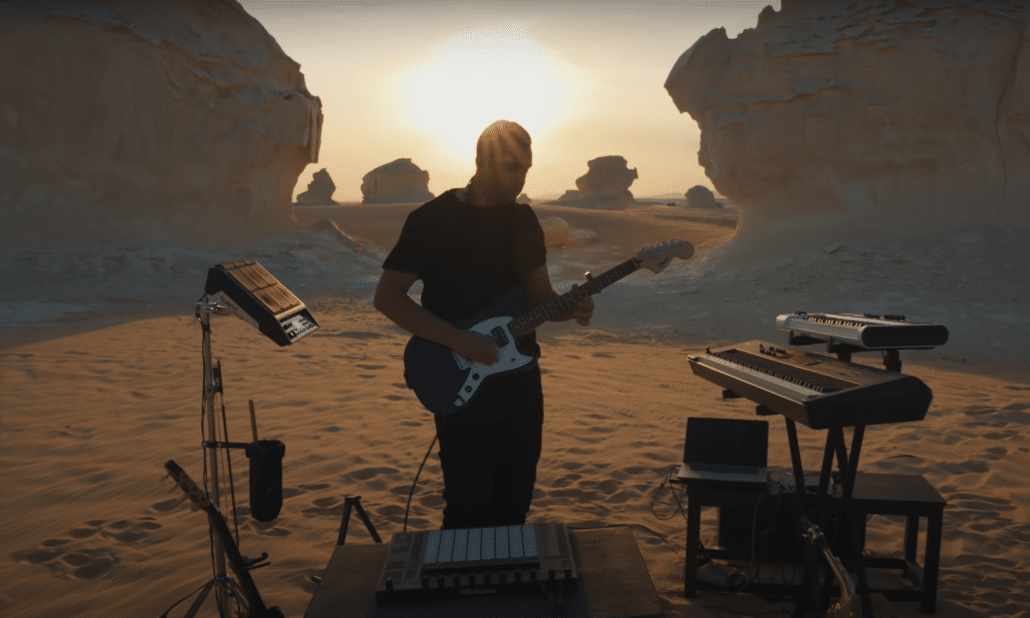 I usually build my entire setup around the Ableton Push 2, because it allows me to control everything in my set as well as playing some synth melodies on it, it is always in front of me in my live setup. Paired with Ableton, the Push was the brain of my White Desert performance. I also use a script on Ableton called Clyphx Pro that allows me to automate a few things and make my performance more smooth and seamless. For example, with Clyphx Pro, I can ask Ableton to loop an instrument as soon as I’m done playing it without having to actually push any other button; this way I can just focus on my play and performance. I also play the intro pad of the track on the Push. 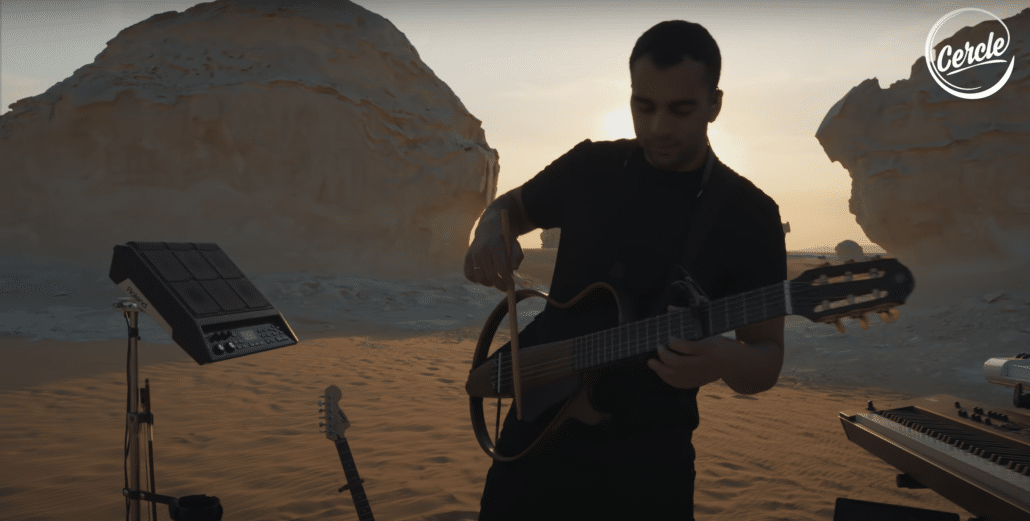 I usually like to make sure that my performance is also entertaining. The reason why I played the guitar here with a drumstick, is that when composing the song, I wanted to have a sound that simulates the feeling you get when you hear that ‘sandy wind’ in your ears. In the studio, I found the sound of the drumstick hitting the highest string of the guitar with a lot of reverb & delay, had that exact feeling. I was excited to do it live because it is also entertaining to the viewer; to see that music is also about experimenting with random objects or unconventional ways of playing an instrument.

SPD-SX and No Drumstick (the drumsticks belong with the Guitar…) 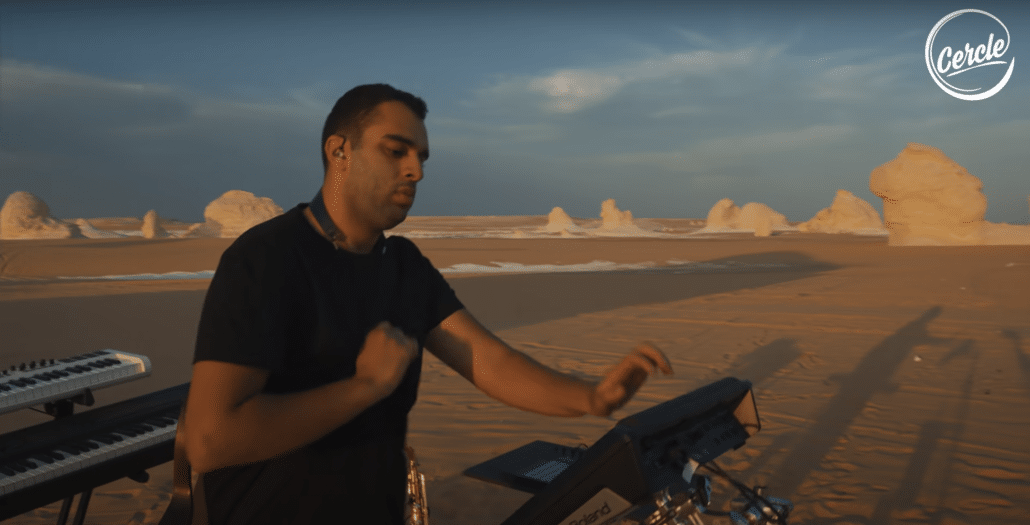 For the percussions, I used the Roland SPD-SX. Oddly enough, in my White Desert performance, I didn’t play the percussions with my drumsticks (the drumsticks were busy having fun with my guitar I guess). Instead I played with my hands. Playing with the hands is obviously nothing special and adds absolutely no value to the sound. It helped a lot in my performance though, here’s why: in this performance, I had 5 minutes to play all the different instruments and sounds in the track, in the 4 bars before the section where I have to play the drums, I was playing on the Piano, which means that I had literally 1 second between the last note on the piano and the beginning of the drums section to move from the piano, turn around and start playing on the drums. I simply didn’t have time to take my drumsticks and start playing the drums and that’s why I’m playing with my hands. That’s just a random fun fact & tip for anyone struggling to find time to pick up the drumstick during a performance. 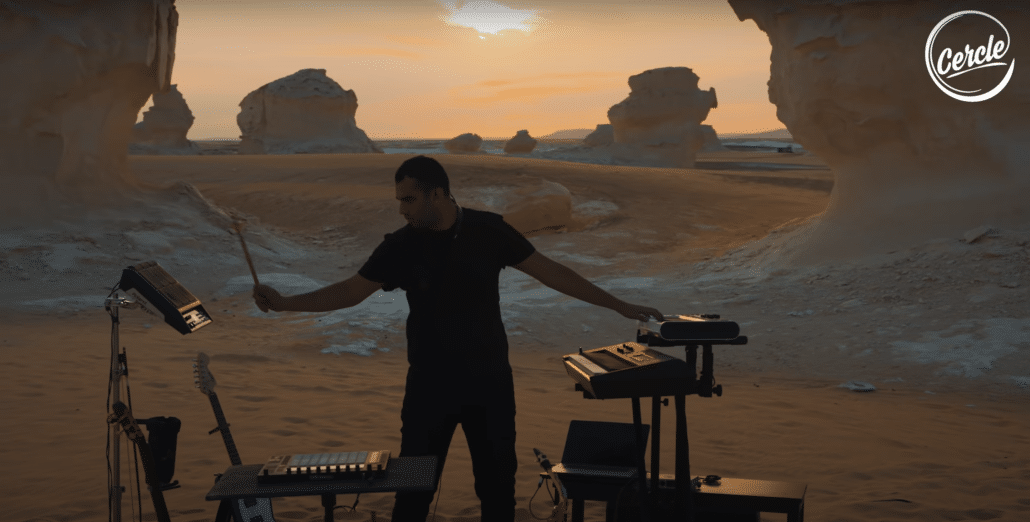 Having 2 keyboards during a live performance is very beneficial because it allows me to play multiple sounds at the same time. In White Desert I had the Roland RD800 and the Axiom 49 Pro. For the last drop of the track, I play the Piano on the RD800 with my right hand and the main arpeggiator on the Axiom 49 with my left hand. 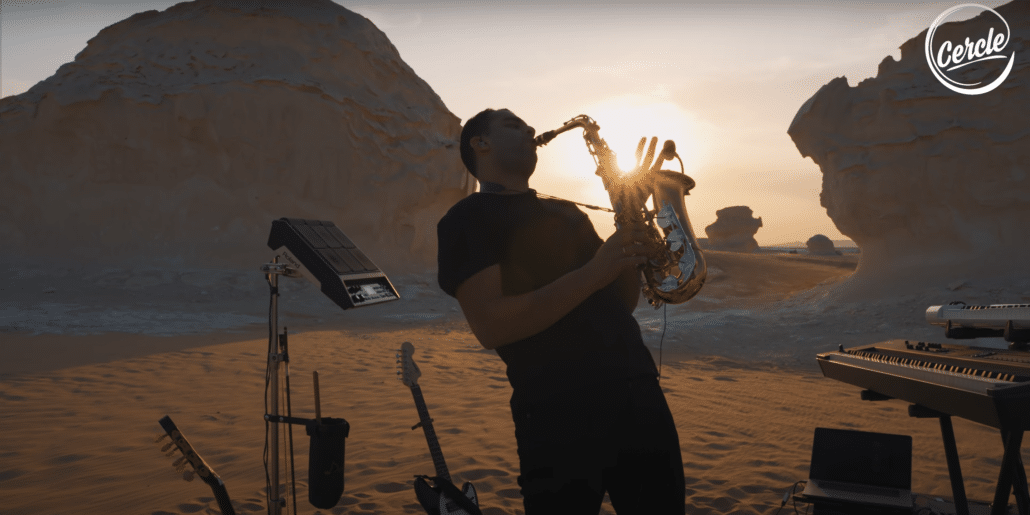 The saxophone is definitely one of the most important parts of my live performance. It was extremely difficult during the setup and soundcheck because there was a big sandstorm. I could barely hear the saxophone because of the wind tapping on the Saxophone microphone, which was making it also impossible to record the sax part. Luckily enough, the sandstorm stopped 10 minutes before we started the performance and I was able to properly play and record the saxophone part 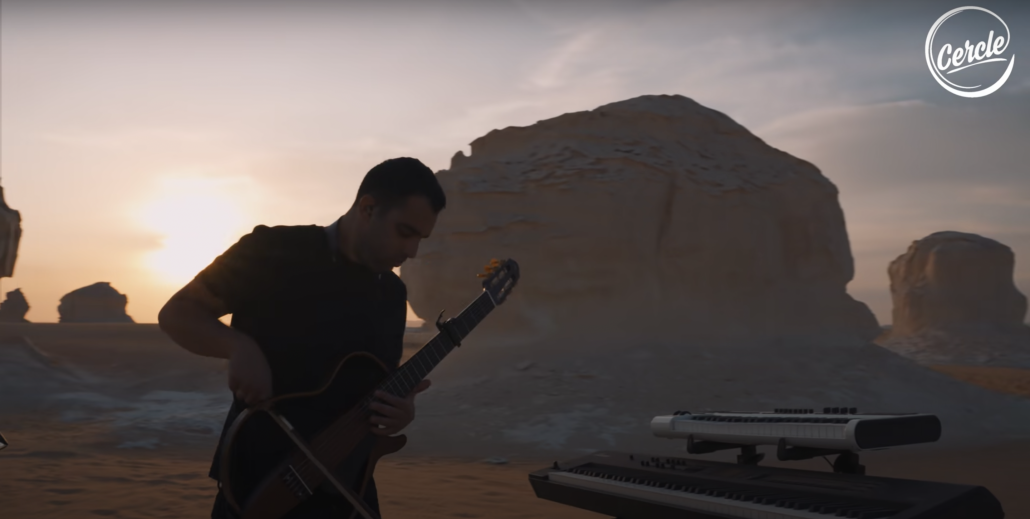 For someone who always wanted to play the violin and cello, that was a pretty good alternative. Again, I was just experimenting here. It obviously doesn’t sound like a cello, but It does sound like a bowed instrument, which is the result that I wanted!

In this last still from the live performance, you can see me hit the bass buildup before the final drop, while having my left hand on the Axiom. I wasn’t doing anything on the Axiom yet, I just had my fingers placed on the first notes that I was going to hit to play the arp. I just like to always be prepared when I know that I have just a second to start playing the next section of the track. In this type of live performance, where you have 5 minutes to play each and every sound in a track, it is extremely important to always know what you’re about to do next.

Ash ‘White Desert’ is out now on Cercle Records, filmed in the White Desert, Egypt

If you enjoyed his Cercle stream, connect with Ash: