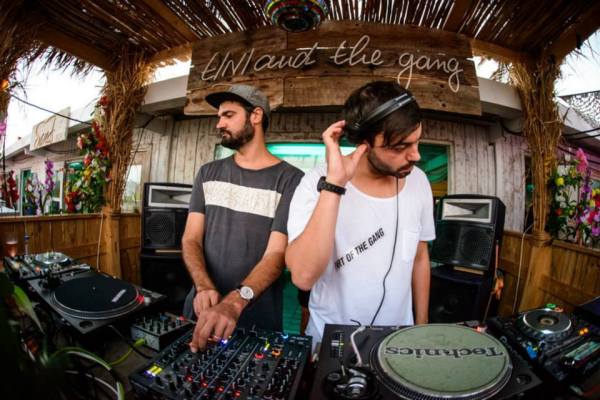 6,450 miles. That’s how far Livio & Roby will have traveled from Romania to be here in sunny Los Angeles next Friday, and they’re bringing their iconic style of house and techno with them. Livio & Roby are masters of hypnotic music that encompasses all facets of house, minimal, and techno. To say that their music takes the audience on a journey would be an understatement; it’s much more than just a journey…it’s an experience.

Through their mesmerizing dance floor grooves, they’ve gained the attention and support from some of the biggest players in the industry like Steve Lawler and Loco Dice, and recently were chosen to be the official support to Apollonia at this year’s BPM Festival. Friday January 23rd the Romanians are bringing the groove to Los Angeles for our second installment of WORK, an opportunity not to be missed by any fans of house music.

2014 was a monumental year for Livio & Roby. As a duo they accumulated releases on labels like Viva Music, Serkal, and Vakant; and as their trio project, Premiesku, they released a fantastic record on Desolat that has been blowing up dance floor worldwide. You can listen to some of their recent releases via their Soundcloud which is full of fresh music from their various projects. While their music can speak for itself, their ethos and understanding of sound is a driving force behind their artistic talent and success. How can we attribute this drive and energy that they put forth into the music? For starters, we can look at the early days of a developing Romanian scene.

Underground music scenes seem to thrive in the moments after becoming free from oppression. Like Berlin when the wall came down, the Romanian scene began to flourish after they became free from Communist rule in 1989. It’s not like the scene was non-existent prior to the late 1980’s; Romanians such as Sorin Lupascu made a tremendous effort to provide music to the public, but when free from Communism the scene grew tremendously in many aspects. Artists such as Livio & Roby, Raresh, and Mihai Popoviciu all have expanded into international talents, and today Romania plays host to many fantastic clubs and legendary festivals such as Sunwaves. More than a few recognizable names on that lineup…

Much like the scene from which they came from, Livio & Roby are quickly becoming one of the most prominent duos in dance music today. While they have enjoyed a great amount of success in their career thus far, things are just getting started for them. 2015 will be another year for the duo to expand their sound and audience, continuing their already adventurous journey. Check back this Friday for more on Livio & Roby as well as some free goodies to help us get in the right mindset for their LA show. January 23rd can’t come soon enough, let’s make sure to give them a very warm LA welcome.