Is Apple Going To Block iPhones from Recording Live Concerts?

Is Apple Going To Block iPhones from Recording Live Concerts?

Is it ok to spend time at a club, festival or concert with your phone in the air, taking constant pictures and videos of what’s happening on stage or behind the decks? People are divided on the subject, with some thinking that such use of cellphones disrupts the atmosphere (and views) at a show, while others think it’s their prerogative to do what they want for a show they paid money to attend.

But what if that prerogative didn’t exist? That may be the case soon with the latest patent awarded to Apple! The technology would allow Apple to activate specific data transmission protocols in conjunction with partnering venues to ensure that your iPhone camera is blocked from taking pictures and videos when held up to the stage. In order to do this, it will tap into infrared technology to ensure that the camera is not functioning solely when pointed to designated areas.

Although the patent was last re-filed in 2014, it was originally first awarded in 2011 despite no specific plans to introduce the technology into upcoming generations of iPhones. 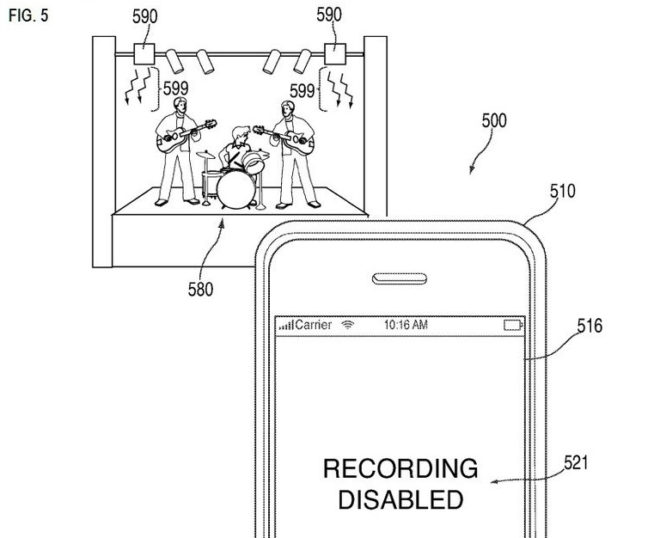 According to FACT, the technology could have other uses too. Immediately it becomes obvious that it could be used to prevent the illegal filming of films in movie theaters, as well as photography in sensitive locations.

The technology could also be used for augmented reality purposes. As an example, the phone could be held in front of exhibits at a museum or art galleries, immediately becoming the recipient of applicable information via infrared on the item being featured.

Needless to say, as the patent belongs to Apple, this technology shouldn’t prevent Android users from taking advantage of their smart phone cameras when out at their favorite show.