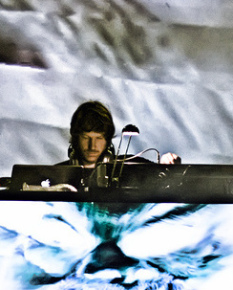 Aphex Twin, a hugely successful electronic musician from Ireland, has been one of the leading pioneers of minimal techno since its inception. He has continued to develop and redefine the style, sticking true to his underground roots while incorporating elements of a number of genres that have come and gone throughout the years. Due in part to his innovative genius, but not without decades of hard work building a name for himself, Aphex Twin has become one of the most sought out DJs in underground dance music. However, given his enormous success, he has managed to stay humble all these years, embracing and supporting a new generation of electronic producers at a time when so many of the “legends” are squabbling on twitter, running their mouths off about the so-called demise of dance music in America at the hands of “kids.”

If anything, Aphex Twin has shown that as long as there are dedicated fans and musicians, this culture will continue to thrive indefinitely and continue to penetrate all corners of the globe. Thanks to his respect of emerging artists, he has graciously taken the time to answer 25 questions in an in-depth interview, thus providing younger artists with wisdom  from a seasoned veteran, a gift that, prior to the rise of the blogosphere, was virtually impossible . The kicker? All 25 questions were written by DJ/Producers, and a stellar collection of artists at that. Some of our favorite questions, by artists such as Richard Villalobos, Sven Vath, Rchie Hawtin, Luciano, all followed up with a bonus question by American dance music guru Skrillex… okay, well Skrillex isn’t exactly underground, but he has been monumental in fostering both underground and mainstream in LA.

Check out some of our favorites below, or click here to read the full interview

8. Ricardo Villalobos: Do you mostly make music just for yourself or do you make it for others?

“Well, the people come into your mind when you’re doing stuff. Sometimes people kind of flow past you. Sometimes you fixate on a person. Most of the time you’re not thinking about it, it just comes in. People just come into your head. Because when you’re making music it’s like meditating, when it’s good, when you’re really good. Sometimes, if I like the taste of a person, I try to make music I imagine this person really likes. Which is quite interesting. I don’t even think I want to play it to them.”

10. Sven Väth: Which relatively new musicians have you been listening to or enjoying recently?

“There are so many! I suppose most are from the dubstep genre, it’s stuff I find on [the download and record store, ed.] Juno. There’s actually one thing that is pretty large: It’s some kid called Sd Laika. Generelly, I think, I listen to old stuff more than to new stuff. At the moment I listen to lots of early 90’s Techno, I’m pretty obsessed with it. I really like that, because it’s so raw and basic not so complicated or detailed like my own tracks. Most of those early techno tracks have only three things in them.”

25. Luciano: What are your thoughts on the explosion of “EDM” worldwide, but especially in the US, and all those massive LED light shows with only one guy performing on a stage?

“It’s fine. I actually don’t care what people are doing. I just care about what they’re actually playing. It doesn’t feel related to anything I’m doing. This guy Skrillex, I’ve only heard about his tracks, because my kids played them. It sounds like he has a good grasp of technology. I think it’s pretty poppy, isn’t it? It’s too poppy for me.”

Bonus question – Skrillex: Do you still own your tank and if so, can I come visit to you, try it out and drive it?

“He can come, yeah! It’s still at my sister’s house in Wales. It still works! Amazing old technology, when things were designed and they lasted forever. So, it’s 50 to 60 years old and it sounds fucking amazing.”