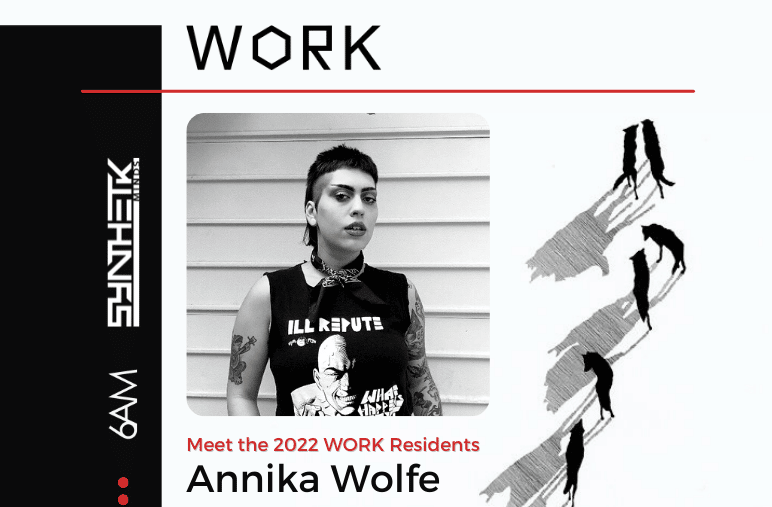 A raw yet sensual take of techno and electro defines the productions and performance of LA-based producer & DJ Annika Wolfe. Their talents have found them playing live and DJ sets alongside legends like Robert Hood and Regis at key bookings like CRSSD Festival in San Diego and LA’s Reform Festival, all while garnering the support of fellow American stalwarts Truncate, Danny Daze, and Silent Servant. Annika talks to 6AM about their artist journey and what the WORK Residency means to them.

My pleasure. 2022 has just begun and I am feeling positive about it. I’ve released some new music out on Glauben Recs. I’m really trying to show some more range this year. I am also collaborating with some fellow Angelenos, you’re just going to have to wait and see what’s brewing in the cauldron. Aside from music production, I had spent the month of January calibrating goals I’d like to achieve. I am going into February hard, with my Mid-West debut in Chicago, following the Anetha, D.Dan show.

2021 is over, what were some of your big takeaways from the year?

Biggest takeaway is that 2021 might be over, but the pandemic isn’t. Keep hustlin’ and keep others in consideration. We’ve been finding ways to navigate and stay afloat throughout the times and shit has been hard. It feels like we don’t have many options left, so do what makes you happy!

“I began to go out dancing as I actually had free time. I was at a festival and something clicked. I needed to make music. Making music soon replaced everything that was missing from my life.”

Annika on how they started their musical journey

How would you describe the style of techno that you play and produce?

Hmmm.. tough question. The music I like to make/play is very rhythm-oriented. It’s going to get you grooving. Might even go as far as making you feel a little sexy. I’m really into the sounds of the ’80s, so there’s a lot of influence there. I am also a really big fan of the 808 and Linn drum machines, so the two definitely make appearances. I’m a fan of vocals, not everyone is… but when done right, they add an extra level of creativity.  It’s really hard for me to narrow “my sound” to any specific sub-genre as there’s so much good music out there. It really depends on my mood, the party I’m playing, time of the set etc. But generally, you’re going to find that it’s groovy, funky, and sexy.

Who were some of your biggest influences as you were developing as an artist?

Some of my biggest influences have been artists like: Jimmy Edgar, The Hacker and Miss Kittin, Marc Houle, AUX 88, Truncate, and Luke Slater.

What were the biggest challenges that helped form your artist project?

Back in 2013, I made one of the biggest decisions of my life. I decided to walk away from my career as a D1 NCAA Collegiate Softball Player. This came as a surprise to just about anyone with who I had crossed paths. At this point, I had dedicated ⅔ of my life to the sport. I mean, my literal existence revolved around this one thing. I was so passionate about my craft. This was my escape. I was able to slow time down and take life one pitch at a time. My career came to a halt and I had an identity crisis at 22. I felt like I no longer had a purpose.

While struggling with heartbreak, I found solace in music. I began to go out dancing as I actually had free time. I was at a festival and something clicked. I needed to make music. Making music soon replaced everything that was missing from my life. I was able to harness that same drive and passion I had for softball and translate it into my musical craft. For me, music and softball are quite linear. I practice, study techniques, perform, and most importantly, escape. Funny thing is, I always wanted to make music. Softball just had more “promise.”

“The music I like to make/play is very rhythm oriented. It’s going to get you grooving. Might even go as far as making you feel a little sexy ”

Annika’s take on their music

You’re part of the newly launched WORK Residency Program. What does it mean to you to be invited to be a part of it and recognized as a standout talent?

It’s been a pretty great honor to have been asked to become a part of the WORK Residency Program. The roster is filled with a bunch of my pals who I have seen really grow and develop into their own over the years. Everyone on the roster is consistently working on their craft and it’s inspiring. We all have different sounds and are all grinding to reach our goals. It feels great to know that hard work has paid off. I’m just happy to know that people enjoy and value my work as an artist.

Why do you think the WORK Residency program is an important initiative?

It’s a great initiative to represent the artists here in Los Angeles. You look at artists and clubs around the world who affiliate with one another. What we have here is unique and unlike the rest of the world. We have warehouse parties who pull talent that play the world’s top nightclubs.

You’re about to play a show with Athena and D.Dan on February 19th. What kind of music can people expect to hear from you?

It’s hard to say right now. But you’ll probably hear a lot of everything. Ranging from Techno, Electro, and EBM.

I am looking forward to creating music and connecting with more like-minded individuals.

If you see me at a party come say hello!