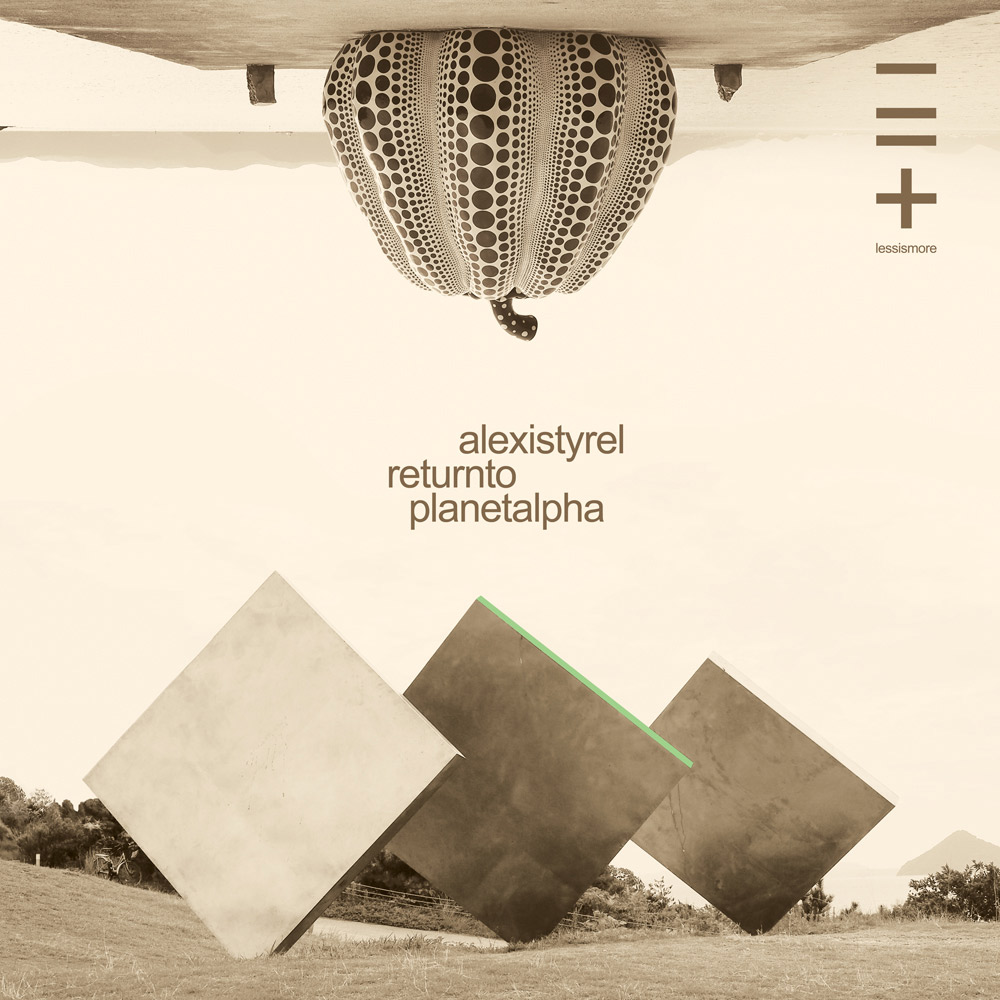 Lessismore record label, founded in 2003 by the Dutch DJ and producer Alexis Tyrel together with MBC, has been home for mostly his own releases under all his monikers and ‘various artist’ compilations.

Return To Planet Alpha continues in this tradition, being a second long-player of Alexis Tyrel after his debut Newtradition from 2011. Return To Planet Alpha is a collection of elegant techno tracks which instead of following the now so popular dark and destructive path focuses on daily moods and airy atmosphere, which is closer to open air and lounge than to sweaty pits of contemporary rave. But that doesn’t mean that the twelve tracks are just indistinctive background music.

For one thing, Tyrel is a master of slick and tight beat foundations of kick drums and bass, often smoothed out with cool synth pads, onto which he layers all kinds of rhythmical chains, subtle melodic ideas and sounds ranging from vintage synths and industrial bits to organic textures and even field recordings. Another distinctive feature of Alexis Tyrel (and his alter ego Gideon, which appears as a remixer on the LP) is diversity and playfulness. The sound environment of the LP, which is obvious from the album and track titles, inclines to a space theme, mainly thanks to the synthesizers recalling the 1980s. But instead of just recreating that.

We are honored to be premiering “Right Side Of The Sun” off of the forthcoming EP, and to have had the time to chat with Alexis ahead of the release. The twelve-track LP Return To Planet Alpha will be released March 17th on digital and vinyl via Lessismore and available for purchase here.

Hi Alexis, we feel lucky to be getting some talk time with you in between all the hours you spend in the studio!

Thanks, for having me. Yes, I have been spending a lot of time in the studio, after deciding to start again, after taking a few years off.

Congrats on the new album coming out. Where did you record it?

The album was recorded at Lessismore studio 1 at the end of last year. I was lying sick in bed. It was about 3 o’clock on a Saturday night and I could not sleep. I came across an online interview with Ben Klock. Some of the things he said triggered me and reminded me of the time I played at Berghain a long time ago. I got out of bed and went to the studio, pulled out my old sketches, sounds and sequences that I made before and around the period of the Lessismore label night at Berghain. I started recording for 2 days and this resulted in Return To Planet Alpha.

What does the title Return To Planet Alpha mean?

For me, Return To Planet Alpha is about the voyage I made, personally and musically. I will not tell you all because this is a very long story, but I will give you a glimpse inside the basics.

On work days I travel from planet Beta (Eindhoven) to planet Alpha (Amsterdam), where I have a beta job in a generalist labelled alpha business. In the beginning this was pretty difficult adjusting and I struggled with this a lot. For me, it was an upside down world. Making this travel almost every day, I had time to reflect on how I ended up in this. I have a good job and people were nice, so this should not be the problem. But still something was wrong in my perception and I could not lay my finger on it. After a few years I got it, it was me. My mind set was totally wrong. I was upside down. This is pretty hard to admit to oneself and after admitting it, I had to recalibrate. With this album, I went back to the origin, even before starting Lessismore, and I tried to fix my wrong doings. So what I did when recording, I tried to block out the need for perfection and just went with an old feel and tried hard not to produce the music, but to just let it go.

We’re premiering “Right Side Of The Sun”. What was the inspiration behind it?

I called the track “Right Side Of The Sun” because the lead sound I used, sounded like something bright or sunny. Looking at the most likely context of the album, which that it is a techno album, made by a younger, more purist version of myself. Techno is mostly defined and specified by dark sounds, the appeal of this track to me after all those years was that it stays “techno” although it contradicts the typical general specifications of what would be techno. This is why I added “Right Side” to the track title.

What hardware and software can we find in your studio? Would you share a picture of your set-up with us?

I am not one to spread pictures of myself or my studio, but I can give you an inside flash by words. Lessismore was founded sitting in an Eindhoven bar with two of my best friends. For people who do not know Eindhoven, Eindhoven is the Dutch city of technology and also the motor city of The Netherlands. My mother worked at the biggest truck company called DAF which is owned by an American company. Techno was founded in the American motor city Detroit by people who were doing music with an alternative mind set and I think we had a similar mind sets at heart when starting up Lessismore. Further, we liked Detroit techno much more than the harder techno that was being played here in Holland during that period. We decided our name was going to be Lessismore. With as a core doing it the old way we assumed it had been started. Using a minimal amount of equipment and making the best of what we had. Till this day I have not really changed the hardware of my studio.

Do you collect vinyl? if so what’s your favorite record?

I have a vinyl collection as I started DJing in 1993 when I was still very young. But having had set backs in life like many others, I had to sell some vinyl during the yearsL. After getting this question from you, I started to think what my favorite record is. I must say this question cannot be answered, as for me not any record embodies all the aspects that I love in electronic music or music in general. However to try and answer your question, I thought which record(s) did I pay the most money for. This is probably for the records in my Drexciya collection, bought on eBay. But nowadays they are repressing almost all their records so …

This is your second full-length album, how do you feel you’ve progressed as an artist since the first 6 years ago?

For me progression is relative. I think that this album is not my best work as a musician but is just something I had to get out of my system. For me it is a travel back in time to a place where I was a fearless artist and really did not care about what anyone thought of my music. I was more of a free spirit than, than I am now and to be honest going back there felt great. So I think the progression I made with this album is something else than a musical one. And now it is time to see what others think.

You list several genres of underground dance music in your bio. Where do you feel fit in, if anywhere at all?

Nice question, where do I fit in. I would like to say that I would like to fit in somewhere but maybe this is not true. Labelling is part of my job, but musically and even in private I think this is something that we like to do but is very limiting. If I would label myself to something that is most accurate to me, it would be, that I make electronic music with no prejudges of what comes out and this combined with an underground state of mind (my definition of underground).

The LP comes out on your own Lessismore imprint. Tell us a little about the musical objective of the label.

To be fair Lessismore is not really mine, but is a team effort. The objective is to break through linear thinking, as this to me is very stupid and boring. Lessismore tries to make the most of limited resources and sees the upside of limiting oneself in one direction and therefore stimulating oneself in another direction.

Will you be touring in 2017? Any gigs you’re looking forward to?

At this moment I am working my ass off in the studio, this album is finished and will be released soon. After this, a new ep with a Smash TV remix will be released. And then a new album of mine will follow. Return To Planet Alpha had a more space theme whereas the upcoming album has a more water theme, but sounds like space. Hopefully I can let go of this album mentally soon, as I tidy up some sound issues on it.  After this I have about 20 years of sketches lying around, so there is a lot of work to be done. At this moment, gigs wise, I am not taking on anything but in my hometown, so after a gig I can still get some studio time. Being away for 5 years I need to get some shit off my chest, so maybe after this summer if there are interesting requests, I will consider it, but for now I will stay underground.